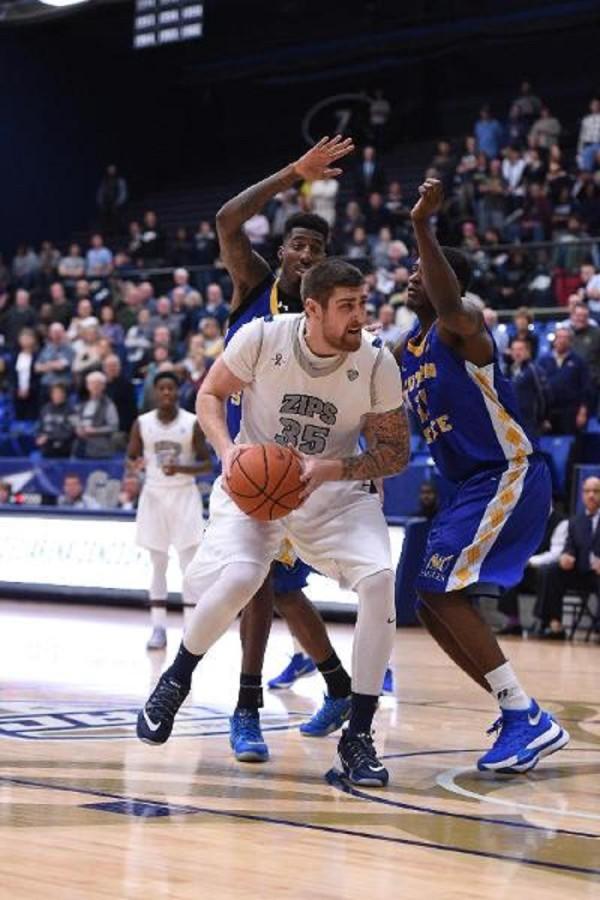 Pat Forsythe (35) working to get 2 of his game high 20 points against Coppin State.

Coach Keith Dambrot got to watch his big men dominate the middle and the rest of his team contributed to help him earn his 150 th home win with a 77-71 victory over the Coppin State Eagles Wednesday evening at the James A. Rhodes Arena.

Pat Forsythe poured in 20 points by hitting nine of his 11 shots from the field, grabbed eight rebounds, and blocked three shots in leading the Zips to their fifth victory on the year against two losses. Isaiah Johnson came off the bench and added 11 points, 15 boards, and 3 blocks of his own to help the cause.

Antino Jackson not only hit double digits in points with 10, but added 5 rebounds and 4 assists in his 33 minutes of playing time.

Guard Noah Robotham made his first appearance in a game this season after being sidelined with a season-ending injury from last year. Robotham started and logged 21 minutes and was able to contribute nine points on 2-of-5 shooting, including a 1-of-3 effort from deep and a 4-of-4 performance from the free throw line.

Akron started the game cold and missed their first three shots and found themselves in an early 5-1 hole. The Zips started to warm up and tied the game at 5.The Eagles’ Keith Shivers hit a layup with 16:57 remaining in the half to give Coppin State a 7-5 advantage before the Zips began a 13-0 run fueled by six different players scoring.

That run gave Akron an 18-7 lead with 12:41 still left before the intermission and then stretched the lead to 25-12 on a three-pointer by Robotham with 7:37 showing on the clock.

The Eagles were able to cut into the deficit before halftime at 28-22, but were not able to get within six before the Zips went into the locker room with a 35-26 advantage.

The second half was a different story for the Eagles as they stormed out of the gate outscoring Akron 20-10 in the first 8:24 and reclaiming the lead after a dunk by Shivers.

Neither team could grab the momentum and take control of the game as there were many ties and lead changes. With 5:43 remaining in the game, the Eagles led, 63-59, after James Sylvester connected on a deep ball.

A pair of free throws and a three-pointer from Jake Kretzer allowed the Zips to recapture the lead at 64-63 with 4:33 still showing on the clock.

Shivers was able to split a pair of free throws to knot the game at 64.

Johnson then took over scoring seven of Akron’s next 10 points to help put the game away. Jackson hit a three, Robotham canned a pair of free throws, and Forsythe split a pair for the 13-7 run to end the game and give the Zips the victory.

Akron return to action on Friday, Dec. 4, when the Zips travel to Huntington, W Va., to take on Marshall. The tip off is set for 7 p.m