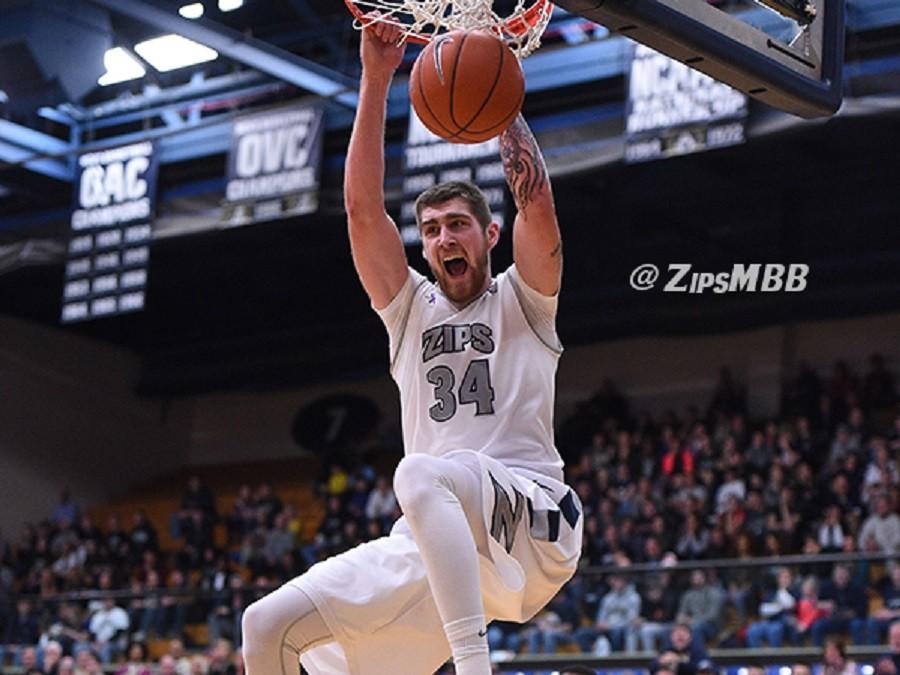 Pat Forsythe slams home two of his 20 points against Marshall.

Pat Forsythe scored 20 points for the second consecutive game to lead the University of Akron men’s basketball team to a 75-65 victory on the road over the Marshall Thundering Herd Friday evening.

With the game knotted at 45, with just over 10 minutes to play, Akron (6-2) used an Antino Jackson long-distance bomb to initiate a 9-0 run that was finalized with a Kretzer bomb to give the Zips a 54-45 lead with 7:38 to play.

Akron was able to lengthen the lead to 15 on a McAdams deep ball and then weather the storm of one comeback attempt by Marshall (0-5) that sliced the lead to eight before the Zips closed out the victory.

In the first half, Akron’s defense was the key in restricting Marshall just 30.8 percent shooting on eight of 26 shots, including just one of a dozen shots from three-point range.

The Zips found themselves with a 16-15 lead with 9:21 showing on the clock before the intermission. Akron then held the Herd scoreless for nearly six and a half minutes until James Kelly hit a three-pointer for Marshall with three minutes left to go.

Akron was not able to take full advantage of the situation, as they were only able to muster six points of their own during the stretch and led 22-18.

“Marshall is a very dangerous team,” head coach Keith Dambrot said. “They play like a pro team and spread you out, and they have two guys who could start on any team in our league. We just couldn’t shake them, and we had opportunities. When the game got tight, we finally made some shots and that was probably the key to the game.”

McAdams drained a three-pointer with just over a minute to play in the half to give the Zips a 28-22 lead heading into the locker rooms.

The Herd began the second half with a 12-4 run to tie the game at 34-34 within the first four minutes. The Zips recaptured the lead on Johnson’s five straight points before the teams traded baskets for a bit before Marshall took advantage of scoring on a pair of possessions in a row to get even at 45.

Akron gets some rest before playing host to Bethune-Cookman on Saturday, Dec. 12 at James A. Rhodes Arena. Tip-off is slated for 7 p.m.