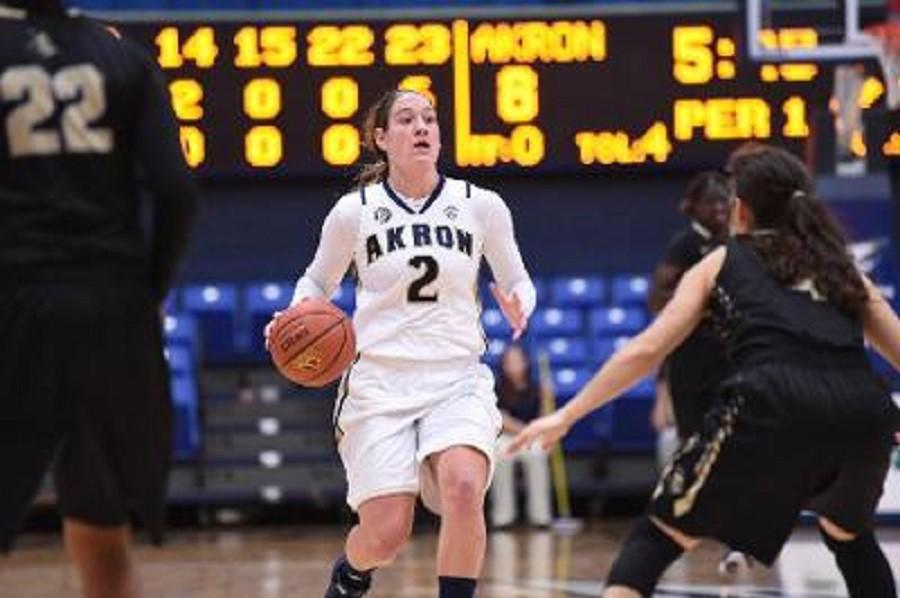 Megan Barilla had 10 points, 10 assists, and 10 rebounds for her triple-double.

Megan Barilla recorded a triple-double and Anita Brown surpassed the 1,000-point plateau as the University of Akron women’s basketball team ran past the University of Central Florida (UCF) Knights, 74-54, Saturday afternoon at James A. Rhodes Arena.

Barilla scored 10 points, grabbed 10 rebounds, and dished out 10 assists on the day, while Brown poured in a game-high 20 points and, in the second half, passed the 1,000-point mark for her career as a Zip.

DiAndra Gibson also added a career-high 15 points on five 3-point shots during the first half. Hannah Plybon chipped in 14 more to go along with 10 rebounds.

Akron (3-4) started the game slow and fell behind 4-0 before embarking on a run that saw the Zips score 15 consecutive points. The barrage began with a Gibson three-pointer to make it a 4-3 Knights (3-5) lead and ended more than five minutes later in the opening period with a Plybon layup. The period ended with Akron leading 20-10.

The second period began with an Ali Ball jumper to extend the Zip lead to 22-10, but three straight field goals from the Knights closed the gap to six points and forced Akron head coach Jodi Kest to call a time out with 6:44 left before half-time.

After a little over two minutes, during which neither team could score, the Zips began a monumental run of 17 points to close out the half, all while keeping UCF out of the scoring column. The run was highlighted by back-to-back-to-back triples from Gibson to help ignite the Akron offense to the 41-16 lead.

Barilla made it 20 straight points for Akron when she opened up the scoring in the third period with a three-pointer. Back-to-back layups by Brown gave the Zips their largest lead of the night at 35 points with 6:57 remaining in the period.

UCF out-rebounded Akron in the affair, 46-31, including 22-9 on the offensive glass. That statistic is one of the reasons that the Knights were able to slice the 30-point Akron advantage down to 20.

Akron has a couple of days off before hitting the road to take on Valparaiso on Wednesday, Dec. 9. The game is scheduled to start at 8 p.m.