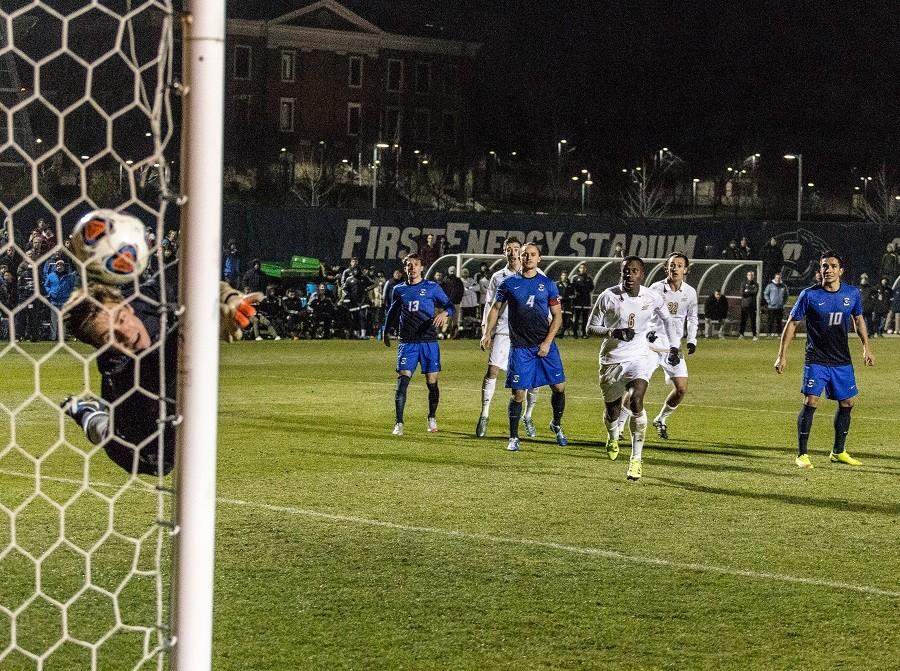 Adam Najem scores the winning goal in the second overtime on a free kick. The ball eludes Creighton goalkeeper Connor Sparrow as Richie Laryea (6) and Robbie Dambrot (22) look on.

After defeating the Creighton Bluejays 3-2, the third-seeded Zips (18-3-2) will battle The Stanford Cardinal in the national semifinal on Friday, Dec. 11, at Sporting Park in Kansas City, Kansas. The Cardinal upset top-seeded Wake Forest Saturday evening, 2-1 in overtime.

Najem’s goal was set up by a great play from Richie Laryea, who was fouled just outside the box to set up the free kick. Earlier in the first overtime, Najem had a chance with another free kick, but the Creighton (19-4) defense blocked the attempt.

“I messed up the first one, and I made these guys play a little extra time,” Najem said. “I just wanted to get that game over with.”

He did not miss on his next attempt, hitting the ball high and to the right of Bluejay goalkeeper, Connor Sparrow, to send the Zips to their fourth NCAA College Cup berth—the first since 2010.

No. 12 seed Creighton statistically won the first half, outshooting Akron 8-2, including a 5-2 advantage on frame. However, neither team was able to breakthrough on the scoreboard, which is what matters most.

Akron had the first chance to do so in the third minute as Stuart Holthusen found Sean Sepe, but his shot was saved by Sparrow, who punched the ball out.

Later on, Creighton’s Ricky Lopez-Espin was wide on a header just before the 14’ mark.

Holthusen missed on his chance to break the scoreless tie for the Zips, but his blast on goal in the 23rd minute was just a little high.

After the scoreless first half, the shots were still flying around, but this time some of them were finding the back of the net.

In the first 8:08 of the second half, the Bluejays fired out four more shots, but Akron goalie, Jake Fenlason, kept his bid for a shutout going with three more saves to go along with the five he had in the first half.

Akron finally found a way to solve Sparrow at the 59:04 mark after Creighton was called for a hard tackle in the box, giving the Zips a penalty kick.

Victor Souto calmly stepped up to the ball and buried into the top right corner past Sparrow for his eighth goal of the year and a 1-0 Zips’ advantage.

Creighton struck back quickly for the equalizer. Fernando Castellanos, standing near the corner of the box, headed a Fabian Herbers pass past a diving Fenlason.

The next 16 minutes saw a dozen shots by both teams in a futile attempt of breaking the tie. Finally, Akron was able to take advantage of the barrage of shots as Holthusen received a pass from Laryea and fed it into the corner of the net for his eighth goal on the year, to give the Zips a 2-1 with 10:09 left in regulation.

The goal gave Akron a NCAA-leading five players with eight or more goals this year.

The lead was short-lived as Ricardo Perez squared the contest at two, converting his sixth goal of the season on a give and go in the middle of the box at the 84:17 mark off assists from Herbers and Timo Pitter.

A shot by Herbers with under five minutes to play in regulation was saved by Fenlason, and off to overtime we went.

“They may have been a little better in the first half, but I thought the second half and on we were better,” Embick said. “Then you just need special plays. We’ve got special players and that’s what it came down to. This team has always found a way to dig deep in big games this year and this was no different. I couldn’t be prouder, but we’ve got two more games.”

The first overtime began with the Bluejays recording the first two shots, but neither found the back of the net. Akron finished the session with four shots, but Sparrow added three more saves to his total.

Which brings us to the second extra session, and Najem’s heroics in which he had a premonition about what could happen.

“I’m going to be honest with you guys; I was actually visualizing that moment when I was sleeping last night. I told myself, ‘If I get a free kick outside the box, I’m going to try to put it in,’ ” Najem said. “I’m just focused on the ball. I know where the goal is, where the goalie is. Hopefully just hit it right and hopefully the goalie doesn’t get a good read on it and it goes in the back of the net.”

With the win, Akron will face eighth-seeded Stanford at 8:30 p.m Friday at Sporting Park in Kansas City. Second-seeded Clemson meets sixth-seeded Syracuse in the other semifinal. The championship game is at 2 p.m. next Sunday.