Lessons in creativity and science 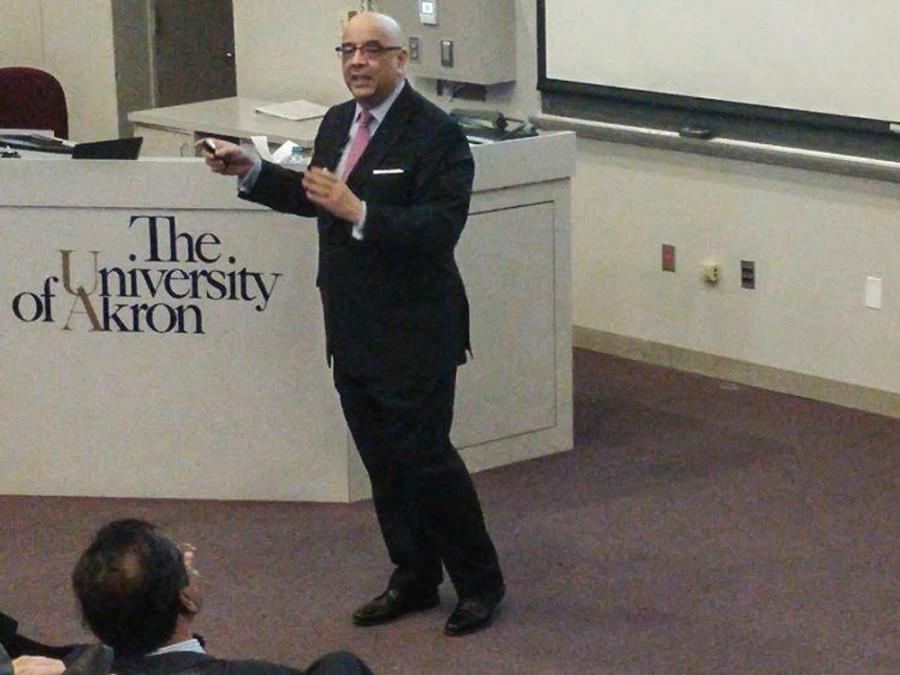 Julio M. Ottino, dean of the School of Engineering and Applied Science at Northwestern University visited UA on Dec. 4.

Julio M. Ottino, an an esteemed researcher who has been heralded by the American Institute of Chemical Engineers as one of the “One Hundred Engineers of the Modern Era,” lectured Friday, Dec. 4 in the Polymer Center Auditorium on the connections between creativity and science.

Almost 80 students and professionals listened to Ottino, who is the dean of the School of Engineering and Applied Science at Northwestern University. The lecture, titled “Creativity in Science, Art, and Technology – Lessons and Myths,” was one-half of the 2015 installment of the annual Saudi Basic Industries Corporation (SABIC) Lectureship.

The purpose of the lecture was to prove that “artistic creativity reveals processes that hold lessons for scientific and technological creativity and innovation.”

To open the lecture, Ottino introduced a series of myths about creativity. Those myths included such beliefs as “everyone is creative,” “creativity is effortless,” and “creativity depends on epiphanies.” He emphasized that artists often hold romanticized views of scientists, and vise-versa.  For this reason, people often struggle to see similarities in the evolutionary processes of art, science, and technology. However, Ottino spent the remainder of the lecture proving that the disciplines are interconnected.

As one example of this interconnectedness, Ottino referred to 20th century physicist Niels Bohr, whose explanations of angles influenced painters such as Jean Metzinger, and led to the creation of cubism, an art style that portrays objects as a set of blocky shapes.

Then, to debunk the myth that artistic creativity is “effortless” for some, Ottino referenced a common anecdote about famed author Jack Kerouac. According to legend, Kerouac typed his best-selling novel On The Road in three weeks on a gigantic scroll. The scroll actually exists, but the three-week time frame is simply a misunderstanding.  In reality, Kerouac spent years ironing out the details and writing drafts of On The Road. Once he had every detail planned, he typed out the final copy in three weeks.

Ottino used this anecdote to explain that creativity is not easy. “Inspiration is overrated,” he said. While it is easy to believe that creativity is found in moments of divine intervention, Ottino believes otherwise. He advised attendees to “equate creation with hard work.”