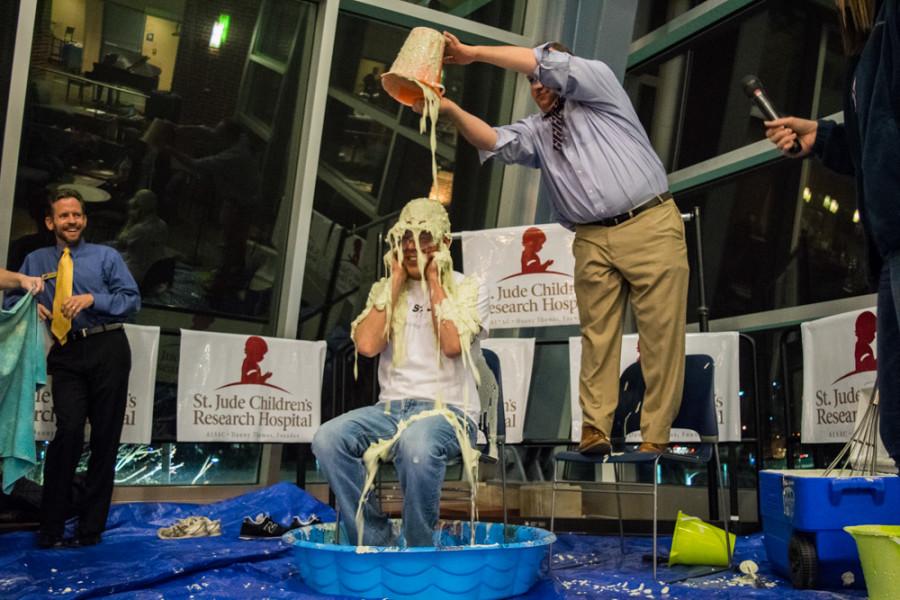 John Messina is slimed during the event by Zac Steiner.

“Can you show everyone how big our whisk is?” Zips for St. Jude President Paige Schertzinger said as Zac Steiner, assistant director of Off Campus Student Services, brandished a two-and-a-half foot long egg beater.

As the 25-30 students in the Student Union Starbucks lounge watched, Steiner mixed a cooler of green slime, a concoction of baby shampoo, jello, flour, and water.

“For the kids,” Messina said, dedicating his imminent sliming just before Steiner dumped the bucket over his head.

Messina was among 11 candidates chosen to participate in Zips for St. Jude’s third annual Slime Event on Dec. 3.

Zips for St. Jude is a student organization that focuses on raising awareness and funding for St. Jude’s Research Hospital, a pediatric treatment center in Memphis, Tennessee. The hospital is one of the few in the U.S. where patients don’t pay for treatments not covered by insurance. Patients without insurance are not required to pay at all.

At the event, attendees could put donations into jars in the piano lounge. Each jar featured one of the 11 candidates’ names. Leading up to the event, which was slated to begin at 5:30 p.m., the Zips for St. Jude announced which three candidates had the most donations. In the last fifteen minutes, the top three were constantly changing.

Schertzinger noted after the event that they had also been collecting donations for the past month and a half.

As each candidate prepared themself on stage, Schertzinger opened an auction. Students and faculty could then bid for the opportunity to fill a bucket and slime one of the three candidates.

By the end of the night, with the bidding included, Zips for St. Jude raised $1,075.