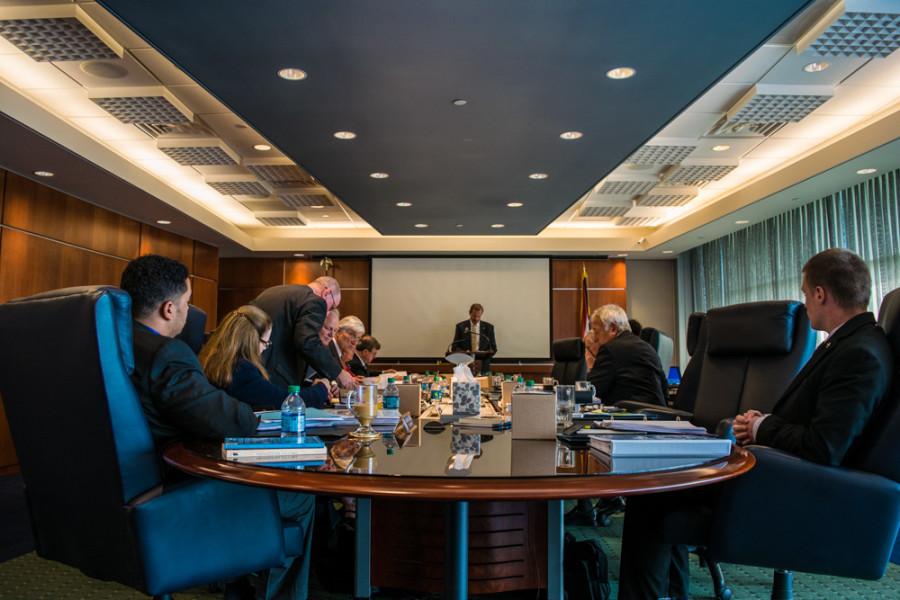 Matthew Wilson, UA School of Law dean, gives a presentation to the Board of Trustees. Thirty minutes prior, a protest was held outside.

By Logan Lane and Kristina Aiad-Toss

Yesterday, outside the doors of the Student Union Room 339 — the location of the latest Board of Trustees meeting — protesters were told that chanting would not be tolerated.

UAPD Captain Bryan Taylor notified a group of around 30 students and faculty that organized chanting was not allowed in the Union. Should protesters refuse to leave when asked, he said, they could be arrested on charges of trespassing and escorted out.

Taylor said he wanted to balance the protesters’ right to organize as well as the University’s right to conduct its business without disruption, citing the various meetings and classes going on nearby.

“I imagine the real issue is that they don’t want attention drawn to [the protest], so the people aren’t aware of what’s happening,” said Chris Drabick, a visiting professor at UA who attended the protest.

The protest was the most recent in a series of similar events organized by the Akron branch of the Ohio Student Association, as well Facebook groups such as “Save the University of Akron from Scott Scarborough,” “Olive Jar,” and “Graduates over Greed.” These groups have come together to express concerns over recent administrative changes and a perceived lack of attention on cultural and arts programs.

At the last protest, held outside the Oct. 14 Board meeting, students and faculty gave speeches over a microphone system and shouted organized chants. It caused confusion and frustration yesterday when they were told that chanting was not allowed.

Student Union Director Anne Bruno said she spoke to protest organizers the day before, telling them that chanting would not be allowed. She added that protesters at previous demonstrations should have been asked to leave or quiet down, like at yesterday’s; the only reason they weren’t was because of a lack of communication between protesters and administrators.

Kevin Kern, an associate professor of history, attended the demonstration. He expressed concern with how the administration was treating a peaceful protest.

“I understand the need for security, but do you need several uniformed officers for a bunch of people standing around talking?” Kern said. “[They’re here] to cart people away if we begin chanting, I suppose.”

Also present was Michael Adams, a historic preservationist from New York. On Tuesday, Adams picketed for two hours outside Bierce Library near the Buchtel Statue, his voice booming over campus: “Save Akron from Scarborough!”

An Akron native and UA alum — along with his father and four sisters — Adams came into town a few days ago to see his mother, his first time returning to Akron in five years. His main grievance is the proposed tearing down of St. Paul’s Episcopal Church and four buildings in Quaker Square, both of which are listed on the National Register of Historic Places.

At yesterday’s protest, Adams was disconcerted by the news he was not allowed to chant — his trademark from the day before while picketing. Adams was arrested once while protesting the demolition of a building in Brooklyn; he said at yesterday’s Board protest he was willing to be arrested again so long as someone would chant with him, but no one did.

Though slated to begin around 9 a.m., the Board meeting’s public session did not open until after 11:30 a.m.

At the meeting, the trustees voted on a consent agenda consisting of proposed curricular changes, proposed name changes for the Department of Public Service Technology, a graduation list for fall 2015, a summary of quarterly research and sponsored programs, renovations to the law school, a gift income report, purchases over more than $500,000, and external audit results.

A consent agenda is a meeting practice that bundles different committee reports, meeting minutes, and other non-divisive topics together. This can save time by allowing the Board to approve all items in one motion.

Curricular changes included the addition of a B.A. in emergency management and homeland security, and the elimination the associate degree in restaurant management and minors in speech and language pathology, media history, and mass media and communication.

All trustees, bar one who abstained, voted for the consent agenda.

In the Board agenda, a presentation on the University’s new Student Success Coaches was planned; however, no such presentation took place. Provost Mike Sherman said that the presentation will be included in future committee meetings.

The Board agenda also included a satisfaction survey on the Success Coaches with a 33 percent  response rate.

The survey says that 70 percent of its 1,314 freshman responders agree or strongly agree that “[they] found [their] success coach to be helpful in explaining University of Akron resources to [them].”

Sixty-two percent agree or strongly agree that “[they] found [their] success coach to be a helpful resource to [them] at the University of Akron.”

In addition, Sandra Pianalto, the non-voting advisory trustee, was appointed to a second three-year term.

Sherman attended his last meeting as UA provost before being appointed as the vice president for innovation and economic development. Senior Vice Provost Rex Ramsier will serve as the interim senior vice president and provost until a new provost is named.

Ted Mallo, UA vice president and general counsel, also announced his retirement effective by 2016. The general counsel is the chief legal advisor to the Board of Trustees.