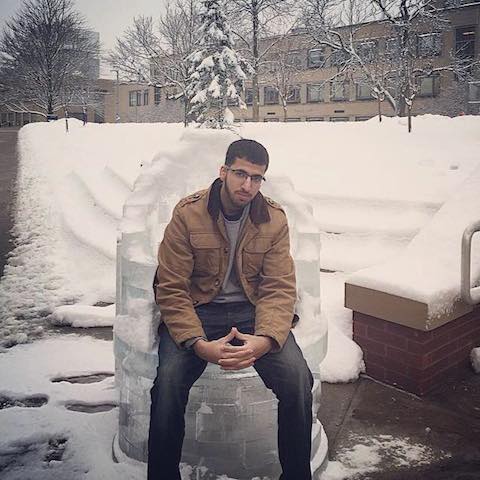 A University of Akron student was shot to death around 11 p.m. on Monday when a robber gunned him down at a pizza parlor in Akron.

Zakareia Husein, 21, was working at his family-owned New York Style Pizza on Glenwood Avenue. Surveillance cameras show Husein handing money to the masked robber, but the robber still shot. Police are still searching for the killer, and believe it may have been a woman.

The family of Husein is offering $50,000 for any information that can be used to find the killer. Investigators believe the killer is one of two people who committed armed robberies at two Family Dollar stores in Akron on Friday night.

Husein was a junior studying international business. The University of Akron released this statement Tuesday: “The University of Akron community is shocked and saddened to hear about the loss of Zakareia. Counseling services are being made available to provide assistance to the campus community in coming to terms with this senseless act. Our thoughts and prayers go out to the family and friends of Zakareia during this difficult time.”

Friends and family remember Husein to be a kind, hard-working, and spiritual person.

“I remember Zak as the person who has been through so many struggles, and yet always stayed positive and kept a smile on his face. He never said anything bad about anyone,” said Mohammad Najjar, a senior civil engineering student and close friend of Husein. “I am extremely hurt beyond belief, but at the same time I know he is happy, and that matters most to me, because he always made me happy.”

Husein graduated from Springfield High School in 2012, and was remembered with a moment of silence before the school’s basketball game Tuesday night.

Husein was active in the Muslim Students Association on campus. President of MSA and Husein’s cousin Amal Almahd said, “I’ll remember his kindness, patience, and respect to people older and younger than him. He’s my role model and I’ll work just as hard as he did to be the kind of person he was.”

Shiban Okab, a junior electrical engineering student, was one of Husein’s best friends.

“Zak was the most selfless and caring person I have ever had the honor of meeting. He had the purest soul — anyone who had met him even a few times had been greatly impacted by his kindness,” Okab said. “There will never be another soul like him, but I am blessed to have had the honor of spending six years with someone as special as he was.”

Husein’s Facebook page still floods with messages from his friends and family mourning his passing. Many have noted Husein’s last Facebook post, a quote from Nishan Panwar, to be fitting: “Forgive those who have hurt you and remember those who have made you smile.”

A candlelight vigil will be held to remember Husein at 5 p.m. on Sunday, Dec. 13 at Findley Community Learning Center on West Tallmadge Avenue.