Zips lose after battling to 0-0 draw in penalty kicks. 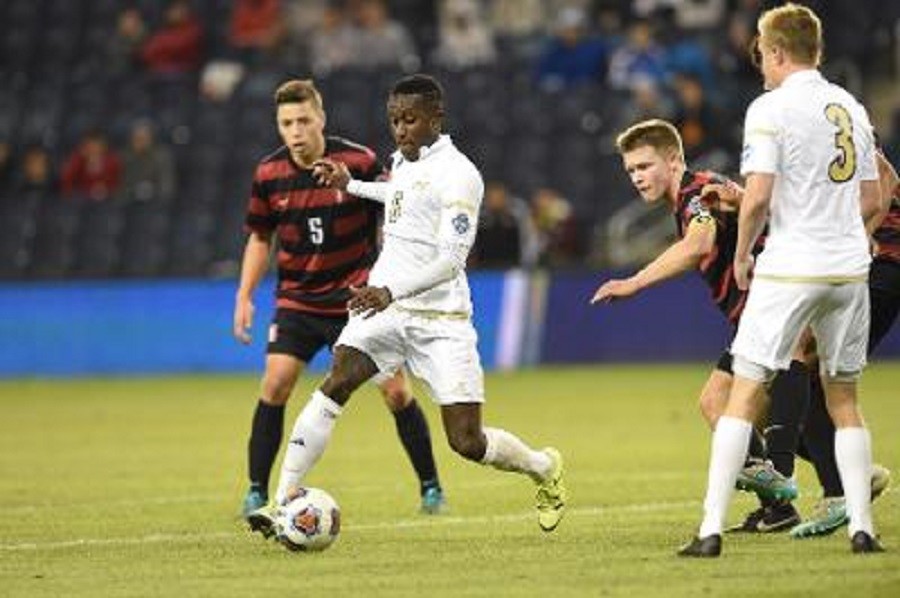 The University of Akron men’s soccer team saw it outstanding season end against the Stanford Cardinal Friday night. The Cardinal (17-2-3) defeated the Zips 8-7 in penalty kicks after the two teams battled to 0-0 double-overtime draw. The game was the second semi-final of the College Cup at Sporting Park in Kansas City, Kansas.

This marks the second consecutive season Akron’s (18-3-3) season ended in a double-digit penalty kick shootout. Last year it was Ohio State knocking off the Zips 13-12 in penalty kicks after a 1-1 draw.

The evening started with teams seemingly more worried about possessing the ball rather than trying to score with the ball. Neither team registered a shot until Corey Baird sent one wide inside the box in the 26 th minute.

Jake Fenlason made his first save of the evening in the 32 nd minute on another Stanford shot and a diving save one minute later on another Cardinal scoring chance.

Fenlason, playing his last game for Akron, was credited with his ninth shutout of the year by stopping six Stanford shots.

Meanwhile, Akron was held without a first-half shot for the first time this season, and was out-shot in regulation time, 12-10. The Zips only managed two shots on goal in 110 minutes of action before the penalty kicks.

“We started slow the first half and we couldn’t break Stanford’s pressure,” Akron head coach Jared Embick said. “We started to get better in the second half and overtime. We couldn’t create enough good chances, and I think Stanford created better chances than us the whole game. We needed to create more opportunities. It goes to PKs, and anything can happen, and it didn’t go our way.”

As the penalty kicks began with Stanford starting, Akron caught a break as Drew Skundrich’s shot went wide. Tyler Sanda opened the Zips portion by finding the back of the net giving Akron a 1-0 advantage.

The Zips maintained that advantage through the next two shooters as Brad Ruhaak and Sam Gainford were able to connect on their attempts.

In their portion of the fourth round of penalty shots, Stanford’s standout player, Jordan Morris blasted one past Fenlason to even the score at three a side.

In Akron’s half, Adam Najem’s shot was saved by Cardinal goalie Andrew Epstein to keep the score even at three going into the last scheduled round.

The fifth and final round did not decide a winner as both shooters converted sending the match into extra frames to decide the outcome.

After Andrew Souders coverted in the Zips portion of the sixth round to tie things at five, Slater Meehan of Stanford missed on his attempt in the seventh round.

Goncalo Soares had a chance to send Akron into the championship game on Sunday with a goal, but Epstein was able to make the save to extend the match.

Rounds eight and nine were not able to provide a decision as both sides converted on their chances.

Round ten saw Baird putting the eventual game-winner past Fenlason as Nate Shultz was denied by Epstein in his attempt to tie the game up once again.

Besides Fenlason, this game also marked the end of collegiate careers of Sean Sepe, and Souders.