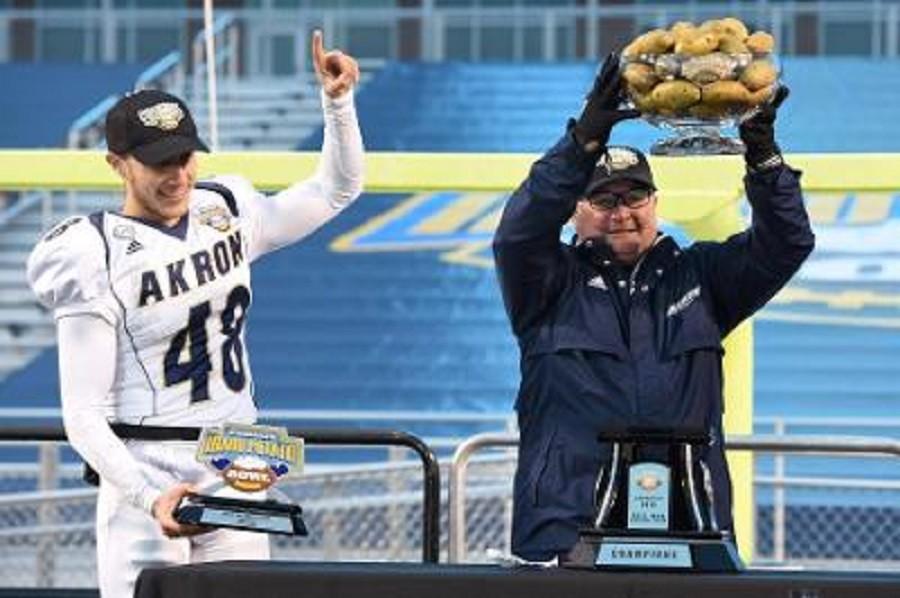 The University of Akron football team won their first FBS bowl game in the history of the program Tuesday afternoon by defeating the Utah State Aggies 23-21 in the Famous Idaho Potato Bowl game. The game was played at Albertsons Stadium in Boise, Idaho before 18,876 fans.

Quarterback Thomas Woodson went 14-of-29 for 168 yards and was the Zips’ leading rusher with 47 yards on 16 carries and was also used as a receiver and caught one pass for 14 yards and a touchdown.

Akron’s (8-5) defense set the tone for the day by holding the Aggies (6-7) on their first possession of the day as Cody Grice and Se’Von Pittman combined for a sack forcing a punt.

The Zips took over on their own 44 yard-line and drove 56 yards for the first score of the day. The final 14 came on a gadget play with wide receiver passing the ball to Woodson for the touchdown and a 6-0 lead with 10:38 to play in the first quarter.

Stein added his first extra point on the day for a 7-0 advantage. The drive took just 52 seconds and three plays, highlighted by the Woodson pass to Coney for 42 yards.

Neither team could find a way to score the rest of the first quarter so the score remained 7-0 in Akron’s favor.

In the second, Woodson threw an interception, but just 5 plays later Aggie quarterback, Chuckie Keeton, has his attempt pilfered by Kris Givens at the Zips’ six yard line.

On the next Aggie possession, Givens was the hero again as he broke up a pass in the end zone on third down. Then on fourth down, the Aggies were thwarted on a fake field goal attempt after losing seven yards on the play.

Akron they controlled the ball for 12 plays and moved 59 yards down the field before Stein kicked his first field goal, a 33-yarder, for a 10-0 Zips’ lead.

Utah State answered right back after the kickoff by going 71 yards in three plays in just one minute and 21 seconds as Kent Myers found Brand Swindall on a 9-yard pass play to slice the deficit to three with just 1:32 remaining before half.

Jatavis Brown recorded a sack on Myers and caused a fumble that was recovered by Rodney Coe, who returned it 56 yards to the Aggies’ 12-yard line with just four seconds remaining before the half.

Stein connected from 29 yards away and the Zips entered the locker room with a 13-7 lead at the intermission.

Utah State took its first leadoff the game at 14-13 following the second half kickoff and going on a seven-play, 64-yard drive culminated in a 19-yard touchdown pass from Myers to Hunter Sharp.

Akron answered right back with an eight-play, 40-yard drive that gave the Zips a 20-14 lead following a two-yard touchdown run by running back Donnell Alexander.

Utah State scored its final touchdown on a two-yard pass with just over a minute to play to close the gap at 23-21 and Akron was able to run the clock down to six seconds before giving the ball back to the Aggies. The game ended on an incomplete pass.

Akron finished the season on a five-game winning streak and set a new mark for wins in a season since entering FBS play in 1987 by winning eight games this season.