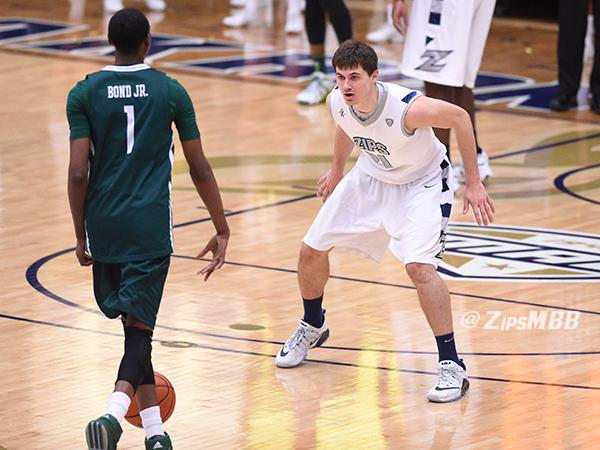 The Akron Zips men’s basketball team improved to 14-4 on the season with a 92-88 victory over the Eastern Michigan Eagles on Tuesday night at Rhodes Arena in Akron.

The win snapped a two game losing streak after road losses to Central Michigan and Toledo.

Senior Reggie McAdams led the way for the Zips by scoring a game high 28 points, including a career high 7 3-pointers made. McAdams’ 28 points were also the second most of his career.

A rough start found the Zips down by six heading into the half. However, McAdams came out and made three 3-pointers within the first 1:40 of the second half to trigger a 58-point second half for Akron, which featured five of McAdams’ 3’s.

Free throws were a key factor, as Johnson made 12 of his 13 attempts from the foul line after shooting just 55 percent from the charity stripe this season.

Willie Mangum led the way for the Eagles with 22 points while Ty Toney scored 16, and center James Thompson scored nine points and led the team with seven rebounds.

Akron entered the game second in the conference in 3-point shooting at 37 percent while Eastern Michigan was dead last at 28 percent. While Akron made half of its 26 3-pointers in the game, Eastern Michigan was more impressive as they made 9 of their 17 shots from beyond the arc.

The win improves the Zips to 3-2 in MAC conference play while Eastern Michigan falls to 2-3 and 10-8 overall.

Eastern Michigan will return to the hardwood on Saturday when they host Ball State. The Zips also play again on Saturday, at home against cross-state rival Miami.