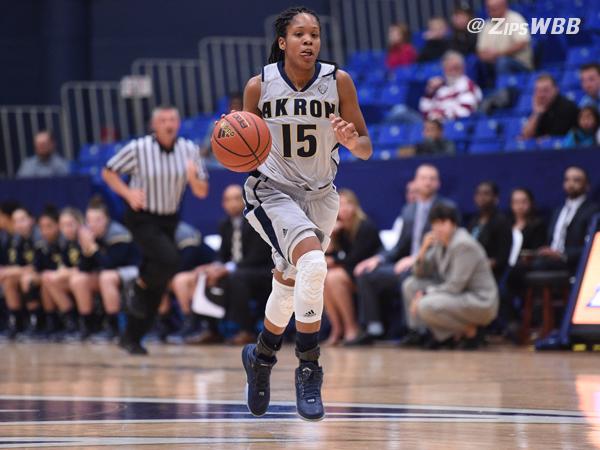 Senior Anita Brown led the Zips with a game high of 23 points.

The University of Akron women’s basketball team fell to the Central Michigan Chippewas on Saturday night by a score of 81-60 in Mount Pleasant, Michigan.

Zips’ star guard Anita Brown led the way for both teams with 23 points on the night. Brown kept pace with her season average of 21.9 points per game. She also led the team in steals, with four, while also dishing out two assists and hauling in five rebounds.

Hannah Plybon followed Brown by scoring 14 points to go with 4 rebounds. 12 of Plybon’s came off of four 3-pointers. Diandra Gibson also had another strong game, as she just missed out on a double-double with ten points and nine rebounds. Finally, forward Greta Burry added eight points to go with five rebounds and two blocks.

Depth was a key factor in the result of this game. Akron received just two points from its bench, when Lilli Piper made a layup with 6:50 to go in the game. The Chippewas bench outscored the Zips 11-2 in the game.

Although the Zips lost by 21, the game was much closer than that. In fact, the game was tied at 43 with just 5:49 to go in the 3rd quarter after a layup from Anita Brown. The Chippewas would respond by scoring the next nine points before Megan Barilla made a free throw to make the score 52-44.

Central Michigan came right back to score the next seven points to extend the lead to 15, and they never looked back.

The Chippewas were led by Reyna Frost, who scored 18 points and grabbed 20 rebounds. Cassie Breen finished with 17 points while Tinara Moore added 15 points and 7 rebounds.

The Zips will get back on the court on Wednesday when they travel to Athens to take on the Ohio Bobcats. The Bobcats are number one in the Mid-American Conference. Tip-off is set for 7 p.m.