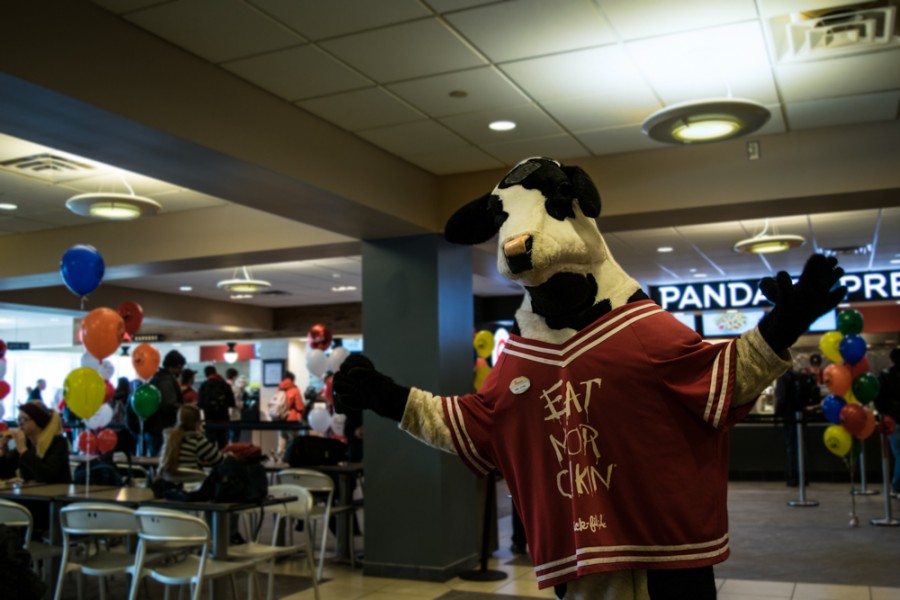 Mr. Cow celebrates the opening of Chick-fil-A in the Student Union on Tuesday.

Last week on the first day of spring classes, Jan. 19, a few new and what are likely to be popular dining venues opened on campus.

Aramark, the company to which UA’s dining services were outsourced last summer, had been working on the construction of these venues since the beginning of fall 2015.

UA’s Chief Financial Officer Nathan Mortimer did the ceremonial ribbon-cutting in the Union around 10:15 a.m. – ceremonial, though, because the venues had already begun serving food over the weekend as a trial run for the kitchens and staff, according to Kevin Strub, Aramark’s general manager at UA. The P.O.D. store opened later in the week on Thursday.

“I think [this is] a nice change for students, it gives them more variety,” said sophomore Kelly Unger, an undergraduate student government senator who works at a Chick-fil-A in her hometown during breaks, and was one of the first to order at the new Union joint.

Unger added that prices at venues off-campus tend to be cheaper, referencing a chicken sandwich that sells for $3.69 in the Union, and $2.99 at the Chick-fil-A where she works.

“I think Aramark did a really good job with really listening to students on what they wanted to see come to campus,” Unger said about the company’s performance during the last semester. “But [what it did with] swipes, that’s definitely a disappointment.”

The new venues take dining dollars, all-campus dollars, and normal money, but besides “full-meal solutions” at the convenience store, do not take swipes.

When a student buys a meal plan – which they must do if they live on campus, and can but are not required to do if living off-campus – he or she receives a set amount of swipes to use per week and dining dollars to use per semester. Swipes used to be good for either admission to Rob’s Dining Hall or the equivalent of $6 to spend on any item at former Zee’s convenience stores (which Aramark will gradually turn into P.O.D.s) or other dining options on campus. Dining dollars could be used at venues where swipes could not, including some places off-campus.

Along with building new dining options on campus, Aramark changed how students could use their swipes and dining dollars, so that swipes could not be used for any item in convenience stores, but only portioned hot meals, or “full meal solutions.” Aramark also divided the day into four meal periods, in each of which a student can only use one swipe. Some students have voiced complaints that this new system can conflict with rigorous schedules, or leave students with unused swipes at the end of the week that do no carry over to the next week.

Strub said next semester the meal plans will be changing, however, to better suit the new venues on campus. Instead of allocating a certain number of swipes to be used per week, the plans will give students a lump sum of swipes that can be used throughout the semester, as well as a greater number of dining dollars.

Along with Chick-fil-A, Panda Express, and the P.O.D. store, Aramark has other plans proposed or in the works to change dining options on campus.

Qdoba, a popular Mexican-style food chain, will show up in late April where Subway once was in the Student Union, right next to Chick-fil-A and Panda Express; there will be a Steak n’ Shake where The Creamery once was on Exchange street, which will be open in late March; and Rob’s Dining Hall and Starbucks will be renovated during the summer of 2016, according to Strub.

Strub also said “the plan is to keep Einstein Bros. on campus,” but that Starbucks might replace it in Bierce Library.

Taylor Foster, a sophomore communications student, bought a sandwich from Chick-fil-A in the Union soon after it officially opened.

“I was expecting maybe a little bit more fanfare,” Foster said, “And I [will] miss The Creamery, but all in all, it’s not too bad.”