What to do when they are dropped 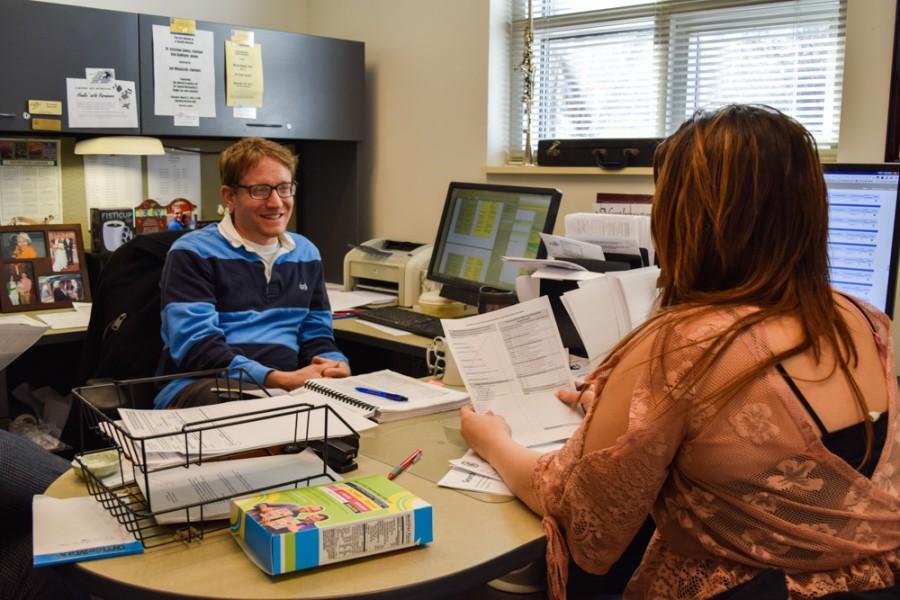 Joe Minocchi, an academic advisor in the College of Arts and Sciences, speaks with a student about scheduling classes.

Imagine being in college, but a class cancellation threatens to keep you in school longer than expected.

This is the situation that Dani Jackson, a sophomore majoring in French, found herself in when in mid-December her upper-level special topic French course was cancelled. Being far enough away from graduation, Jackson is unsure of the impact this has on her graduation date.

According to John Green, interim dean of the College of Arts & Sciences, a minimum of 12 students need to be enrolled in an undergraduate class for it to run at The University of Akron. For a graduate class, the number is 10 students.

Jackson’s class only had seven people on the roster.

The process of scheduling classes — which involves unit directors, department directors, school directors, and deans — starts early. According to Green, the process to schedule spring 2016 classes started in December of 2015. Different information is used such as enrollment history for a particular course. For some courses, enrollment has come in historically late, while others fill up quickly. Green said if a class seems like it’s not going to be filled early on, it gets cancelled. All decisions by the colleges are approved by the provost office.

“We work very hard with our units to schedule as accurately and appropriately as possible,” Green said.

The French program at Akron is small. According to Jackson, there are usually two upper-level electives taught each semester. Because of this, the cancellation of one of these classes has larger implications and consequences for French majors compared to people in larger programs.

In a frantic effort to avoid the class’ cancellation, Jackson messaged her peers on Facebook, imploring them to enroll in the course. She got four people to add the class to their schedule, which would have bumped the count from seven to 11, but it was too late.

Jackson emailed the chair of the Department of Modern Languages, stressing the importance of the class for her education. In response, she was told she could enroll in the other special topics French course — which Jackson had already enrolled in — or take an online class at Kent State or Cleveland State.

Green said that there are exceptions when planning classes. There are instances where enrollment is going to be below the minimum because some programs are smaller than others. Because students need certain courses to graduate, exceptions might be made and a class may run with low enrollment.

Cancelling a course is done weeks before the semester starts so students have a chance to get into other classes. When this happens, the department chair or school director contacts the students in the class by email or by other means and lets them know the course is being cancelled, and suggests alternatives.

“We try to cancel courses at the latest a week before school starts,” Green said. “Sometimes that doesn’t work according to plan, and sometimes if we don’t get it cancelled we let it run, because we can’t mess with people’s lives at the last minute.”

According to Green, this particular policy has been in place for roughly three years. Green, having been working in various positions for about 30 years, said there have been many different methods before this one. The provost office decided a new policy was needed for uniformity when enrollment started to decline and more classes needed to be cancelled. Also, there was the issue of needing to hire more adjunct faculty at UA.

“This gives us more flexibility,” Green said. “It was a good change.”

Prior to this policy, some courses would be cancelled as late as the first day of classes.

“To be at least a week in advance or more is so much better because then we can work with students to help them get the right classes they need to progress toward graduation,” said Linda Subich, associate dean of the College of Arts & Sciences. “In my mind that was the thing that was not working most the old way.”

Jackson disagrees with the system, and said she is not alone in this.

“Given the size of the French program, the enforcement of a 12-person minimum raises question about where our university places its values and whose educational paths are prioritized,” Jackson said. “There is a financial component to consider, but ultimately class cancellation due to under-enrollment is a losing situation for students and the quality of education suffers because of it.”

Department programs can also suggest course substitutions as an alternative. According to Subich, course substitutions happen relatively often. For example, if there is a set of electives that a student needs to choose from as a requirement, the department might allow the student to substitute it with a different course that is being offered that semester. To do this, the student would have to explain their situation to a faculty advisor or a chair, and after the recommendation is made, it is approved by Subich’s office. Some courses can’t be substituted due to the critical content of the class.

Green says the discussion of canceling classes raises a separate issue: how often courses are scheduled. In some of the smaller departments, where there’s a small number of faculty, courses can’t be offered as regularly. This varies year to year; for example, if a faculty member is sick or is on leave.

“This frustrates students. If a student needs a course to graduate in May, we’re gonna do everything we can to help them finish up,” Green said. “I would say most of the time we can make that happen.”

Green said the right thing to do if a student is in a situation where their class is cancelled is to talk to their advisors or a department chair to help them figure out what to do.

Green and Subich suggest students to talk to their advisors or a department chair if they find they have an issue with courses.

“Students should avail themselves of this kind of help, because we really can help,” said Green.

The last day to add a class for the regular session in spring 2016 is Feb. 2, but requires signatures from an instructor, advisor, and dean. The last day to drop a class without “WD” appearing on academic record is Feb. 2.  The last day to withdraw from classes is March 7. For the most current information, refer to the Office of the Registrar, uakron.edu/registrar/dates