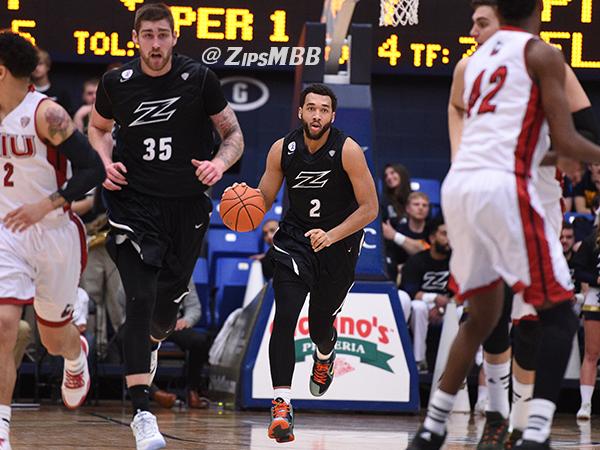 Kwan Cheatham Jr. scored a career high 18 points to lead The University of Akron men’s basketball team to a victory over The Northern Illinois Huskies 76-66.

The Zips improve to 16-4 on the season and 5-2 in conference play while the Huskies now carry identical records.

Cheatham played perhaps the best game of his career to fuel the Akron victory. Along with his 18 points, he pulled in five rebounds, dished out two assists, blocked three shots, made all four of his free throws, and was a perfect 5-5 from the floor, including making all four of his 3-point attempts.

Balance was key once again for the Zips, as four players scored double-digit points on the night. Besides Cheatham, Isaiah Johnson and Antino Jackson scored 13 points while Noah Robotham added 11. Akron has now had a different highest scorer in each of the past four games.

The game got off to a very slow start, with very few points with many whistles. Following a Cheatham 3-pointer with 17:14 to go in the first half, a scoreless drought of three minutes and forty-nine seconds ensued. During this time there were seven fouls,  five turnovers, and eight missed shots.

The game remained at a slow pace until Cheatham made his second 3-pointer of the game with 7:31 remaining in the half. After an Isaiah Johnson steal, Robotham came down and buried a long ball of his own. Marshawn Wilson of Northern Illinois bounced back 21 seconds later to get the Huskies back to within one point. Johnson would respond with a pair of free throws, and a few possessions later Robotham made another 3-pointer to send Rhodes Arena into a frenzy with a 25-19 lead with 5:30 to go in the half. The six point lead was the best the Zips could do, and the Huskies fought back to score the last six points of the half to take a 31-30 lead into halftime.

The second half started off slow from both teams once again. Five points from Isaiah Johnson had the game tied at 35 before Jake Kretzer hit a 3-pointer to give the Zips the lead over five minutes into the half. The Huskies scored the next four points before Kretzer made another shot from downtown. Robotham and Antino Jackson each made two free throws to put the Zips up six with 12:37 to play.

However, Northern Illinois fought back to tie the game at 45 with over 11 minutes left in the game. Zips senior forward Reggie McAdams broke the tie with a 3-pointer of his own and then made it a five point game by finishing an alley-oop layup from freshman guard Josh Williams.

Teams would trade points several times until Robotham made yet another 3-pointer to give the Zips a two point lead with just 6:11 to go. The Huskies’ Michael Orris tied the game 50 seconds later with a layup, but Cheatham came right back just 11 seconds later with another deep ball to put Akron ahead by three.

Following an Antino Jackson free throw and a layup from senior center Pat Forsythe, Huskies’ guard Aaric Armstead cut the Zips lead in half with a 3-pointer. On the following possession Cheatham put the Huskies away for good with his fourth 3-pointer of the game. The shot gave the Zips a six point lead with just under three minutes left to play.

Moments later Jackson blew the roof off of Rhodes Arena with a 3-pointer to give the Zips a ten point lead with 1:34 left. Jackson would make five more free throws down the stretch as Akron completed its victory over the former MAC leader.

Akron has made its living this season with the 3-pointer, and kept that going in this one as they made 12 of their 31 attempts from deep.

The main focus defensively for the Zips was to stop Croatian center Marin Maric, and they did exactly that. They held Maric to only five points on 2-8 shooting while keeping him from grabbing an offensive rebound all game. Additionally, Maric turned the ball over a team high five times. The Huskies were led by Marshawn Wilson, who scored 15 points, while Aaric Armstead and Travon Baker each added ten points.

The Huskies will next travel to Oxford to play the RedHawks of Miami while the Zips will head to Muncie, Indiana to play Ball State on Saturday at 1 p.m.