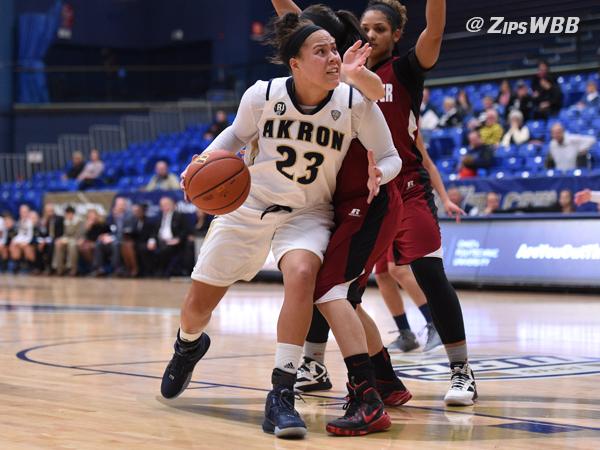 The University of Akron women’s basketball team lost to the Ohio Bobcats by a score of 75-55 on Wednesday night in Athens, Ohio. The win improved the Bobcats to 16-3 overall and 8-0 in games against conference opponents while the Zips fell to 10-9 and 4-4 inside the MAC.

Senior Anita Brown led the way offensively once again. Brown scored 16 points to go along with eight rebounds and one blocked shot. DiAndra Gibson pulled in another double-double with 13 points and ten rebounds while making three 3-pointers. Finally, Greta Burry added nine points and grabbed five boards. Kiyanna Black led the way for the Bobcats with 15 points while Lampkins added 13 and Kelly Karlis pitched in with 11.

Ohio got off to a hot start and never looked back. After Gibson converted from the foul line to tie the game at three less than three minutes into the game, the Bobcats reeled off the next eight points until a Brown layup ended the run. Moments later Gibson hit a 3-pointer to get the Zips back to within three points, but that was the closest they got. A Brown layup with just four seconds remaining in the first quarter made the score 17-12 Ohio.

The home team outscored the Zips 22-7 in the second quarter alone to go into halftime with a 39-19 lead. The only points of the quarter came from junior guard Hannah Plybon, who  made two free throws, and Brown, who made a layup before connecting on a 3-pointer with 1:01 to go in the half.

The second half got off to a much better start for Akron. Greta Burry scored on the very first possession before scoring the game’s next points nearly two minutes into the half. Gibson would make two 3-pointers in the quarter while Burry finished the quarter with all nine of her points in the game, but they still trailed 53-36 going into the fourth quarter. Akron outscored Ohio 17-14 in the fourth quarter while getting zero points from leading scorer Brown.

Redshirt freshman Megan Sefcik, from Austintown, Ohio, kept the Zips rolling early in the fourth quarter by making two 3-pointers to cut the Bobcat lead to 13 points with 7:54 to play. However, the Zips would miss three out of their next four shots while they gave the ball away three times in the next two minutes and fifty-five seconds when Brown made a 3-pointer to make the score 63-48 with just 4:59 left.

The Bobcats would ice the game after that, however, as they received back-to-back 3-point shots from Jasmin Weatherspoon and Quiera Lampkins to finish the hard fighting Zips for good.

Ohio ended the game shooting 39.7 percent from the field while Akron was held to just 27.4 percent Also, the Zips were out-rebounded 53-44 and the bench was outscored 26-13.

The Zips women will return to James A. Rhodes Arena on Saturday as they will host the 13-6 Eastern Michigan Eagles at 2 p.m.