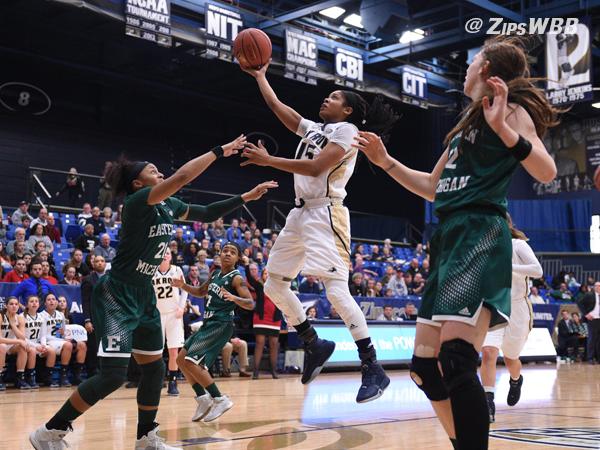 Anita Brown led the Zips with 27 points and 9 rebounds on Saturday afternoon.

The University of Akron women’s basketball team defeated the Eastern Michigan Eagles 75-72 on Saturday afternoon at Rhodes Arena. The Zips improved to 11-9 on the season and 5-4 in MAC play while Eastern Michigan fell to 13-7 and 4-5 in the MAC.

Leading scorer Anita Brown led the game in both points and rebounds with 27 and nine. Brown also added five assists and two blocks while making over 50 percent of her shots from the floor. Brown also led the game in minutes played, as she never came out of the game.

Additionally, guard Hannah Plybon came out and scored a season-high 24 points to go with seven rebounds and four assists. Plybon made four 3-pointers  as well as all six of her free throws. Diandra Gibson added eight points while Alex Ricketts came off the bench to score five points and grab eight rebounds.

The Zips would go on a small run later in the quarter. Trailing 13-8, Akron received two free throws from Plybon, then tied the game with a Megan Sefcik 3-pointer. After an Eagle layup, Brown found Megan Barilla open for a 3-pointer to give the home team their first lead of the game, 16-15. Eastern Michigan would close out the quarter by going on an 8-2 run to take a 23-18 lead.

With the Zips trailing 28-22 early in the second quarter, Plybon started a run that would give the Zips another lead. Two Plybon layups were followed by an Eastern Michigan layup to cut the lead to four. But back-to-back 3-pointers from Brown and Plybon gave Akron its biggest lead, 32-30, with 3:03 to go in the half. Once again, the Zips could not hold the lead, and the Eagles scored 11 points while the home team could only get two. Eastern Michigan led 41-34 at the half.

The game started to look bleak early in the second half, as the Eagles went on a 7-2 run in the first 2:11 to gain a 12 point lead. However, the Zips once again fought back. Two layups from Brown and one from Alex Ricketts, as well three free throws cut the lead to three before Ozelci made another 3-pointer. Brown came right back with another layup before the Eagles’ Janay Morton made a free throw. Akron then scored the next eight points on two Plybon 3-pointers and yet another Brown layup to take a 55-52 lead into the final frame. The Zips outscored their opponent 21-11 in the third quarter.

The two teams traded buckets before the Eagles went on a run of their own. Trailing by four with over seven minutes left, the road team scored the next seven points to take a 63-60 lead with 5:29 to play. However, team leader Brown came up huge with two buckets to take a one-point lead before Ricketts made her only 3-pointer of the ball game to take a 67-63 lead with over three minutes left.

A Brown jumper sandwiched between two free made it a four point game before Sweeney made a layup for Eastern Michigan. Diandra Gibson came back on the next possession with a layup to extend the lead to four. The Zips got a huge stop on the next possession which led to a foul and a Gibson free throw. On the second attempt Gibson missed, but Brown came up with a huge rebound a went to the line herself after being fouled. She made one of two, and Akron had a 73-67 lead with 26 seconds remaining.

Janay Morton kept the Eagles in it with a 3-pointer to cut the lead in half with ten seconds left. Brown was then fouled and made both of her free throws to give her team a five point lead with six seconds remaining. However, Sweeney was fouled by Plybon, and she made both of her free throws with four seconds left in regulation. Morton had one last chance after Brown missed both free throws, but her last-chance effort failed and Akron pulled out an intense victory.

The Zips will now take on Ball State in Muncie, Indiana, on Wednesday while Eastern Michigan returns home to play Central Michigan.