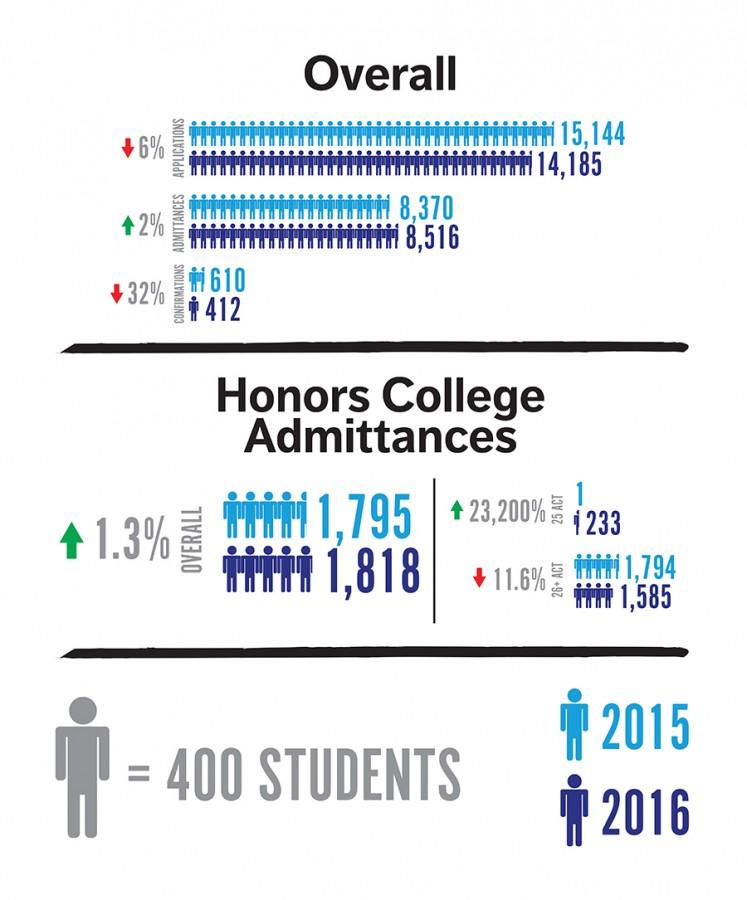 Freshman applications to UA were down 6 percent in mid-January from the same time last year, as the number of admitted students who had confirmed their intent to enroll in fall 2016 were down 32 percent, University data show.

These numbers, updated every week, provide only a snapshot of how the annual effort to recruit new students is going. May 1, the date by which most students who plan on attending UA will have confirmed their intention and paid the admissions fee, is still three months away.

[In the infographic above:

Although it is still early in the admissions process for next fall, the preliminary numbers raise the possibility that enrollment could decline for the fifth straight year. Enrollment peaked at nearly 30,000 in 2011 and has declined about 4 percent each year since, last measured at about 25,000 in fall 2015.

“We are still relatively early in the recruitment and admissions process,” wrote UA Vice President of Advancement Larry Burns in a prepared statement. “These figures can and do fluctuate on a weekly basis and we will continue to communicate with prospective students about the tremendous benefits of a University of Akron education and degree.”

Yet the 32 percent decline thus far in the number of students confirming they will attend UA could portend trouble.

The mid-January statistics also show that more students with weaker ACT scores were both applying and being admitted to UA for next school year.

This might seem peculiar, considering UA’s enrollment requirements became more selective over the last four years after its open-enrollment policy ended with the entering fall 2011 class.

“The referenced decrease is of students who have paid their confirmation fee at a particular point in time compared to one year ago,” Burns wrote. “There can be a variety of reasons and factors for this decrease, including processing of initial admission offers, consideration of scholarship and financial aid offers, etc.”

The story is similar for traditional freshmen, or those who graduate high school in May or June and attend college the following fall. In mid-January, their applications were down 6 percent and, though their admittances were up 3 percent, those who had confirmed their intent to enroll were down 34 percent compared to the same time last year.

Admission to the Honors College used to require a minimum ACT score of 27 (or SAT of 1,210) and a minimum high school GPA of 3.50. Exceptions were made to students who, say, scored only a 26 on their ACT, but had unusually high GPAs. It used to also be that prospective students who met Honors College criteria had to separately apply and be considered for admission.

Over the past three years, those requirements changed.

Instead of having to separately apply, UA instead began offering automatic Honors College admission to any prospective student whose credentials met the college’s criteria – this began in the 2013-2014 school year for those entering in fall 2014. Partly because of this change, the Honors College jumped in enrollment from 357 in fall 2013 to 578 in fall 2014, a 61.9 percent increase.

Then, Honors College enrollment jumped even more from 578 in fall 2014 to 640 in fall 2015. Thorpe said this further increase came from a simpler online application, extended recruitment outreach, and more “yield initiatives.”

This year, Honors College enrollment requirements changed again. Automatic admission is still offered for those who meet the criteria; however, those with ACT scores lower than 27 can be admitted too: the prospective student can have an ACT score of 25 or 26 (or an SAT of 1,130 to 1,200), but needs a GPA of at least 3.75 along with this, to do so.

Data for next fall show that this new requirement is being put to full use.

In mid-January of last year, 1,795 students had been admitted into the Honors College for the following fall. This year, the number was 1,818, a 1.3 percent increase.

During this same time last year, however, only one student had been admitted whose ACT score was 25. This year, that number was 233 in mid-January, a 23,200-percent increase.

This means that whatever number of students would have been lacking if the original Honors College requirements were kept, has been made up for by the new requirement of a lower ACT score and a higher GPA.

Thorpe says the change in Honors College requirements was so that students could be evaluated for admission in a more holistic way.

“It is worth noting that confirmations for prospective Honors College students are about even with last year,” Burns wrote.