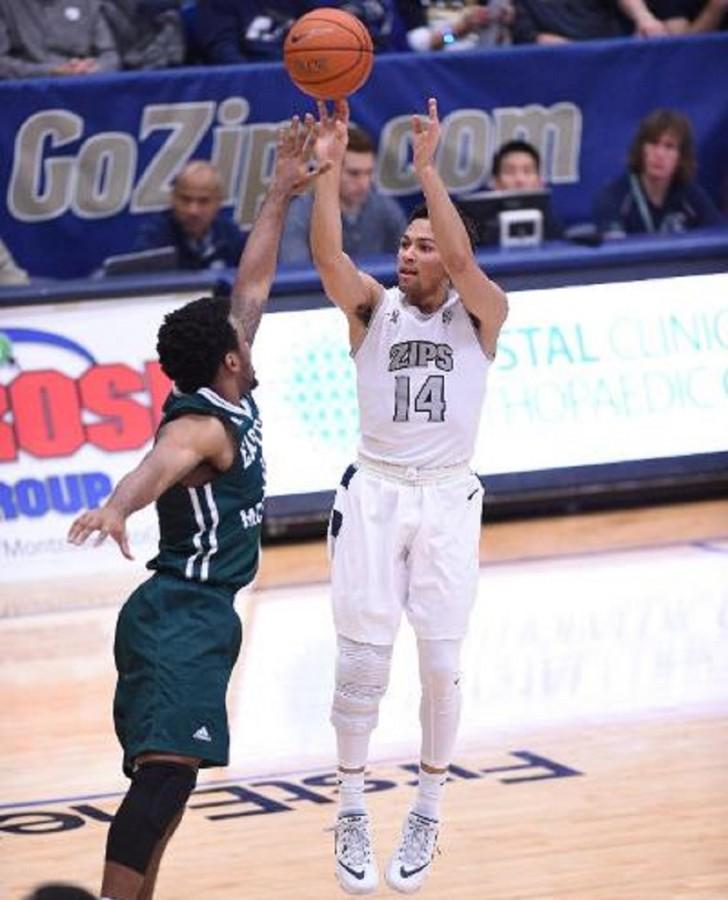 Freshman guard Josh WIlliams scored 20 points off the bench to lead the Zips to a 80-68 victory over the Ohio Bobcats on Tuesday night in Athens.

Ohio started the scoring with a Treg Setty jumper nearly three minutes into the game. Williams came back on the next possession to get the Zips on the board with the first of his four 3-pointers on the day. The Zips then got two buckets in three possessions from big man Isaiah Johnson. Johnson, who also off the bench, was second on the team with 18 points while leading the team with nine rebounds.

Johnson’s second basket started a big run for Akron. Trailing 6-5 five minutes into the game, the team got a layup from Johnson, a jumper from Williams, a Reggie McAdams 3-pointer, and another Williams bucket to give the Zips a 14-6 lead.

The Bobcats scored the next four points to get back within two points. A few possessions later each team got hot, scoring five straight times up the court.

Johnson started the run by pounding his way to a layup. The Bobcats’ Antonio Campbell made a layup on the following trip up the floor before Johnson found Jimond Ivey for a layup.

Campbell came right back with a 3-pointer, but Zips’ forward Kwan Cheatham Jr. answered with a trey of his own to make the score 21-15 Akron.

Following another Johnson basket, the Bobcats went on a run of their own. Five points from junior Kenny Kaminski and a 3-pointer by Treg Setty gave the Bobcats an 8-3 run to get them within three points.

The Zips’ only points in the time frame came from a 3-pointer by Las Vegas native Noah Robotham, his only field goal. Robotham finished with 14 points, making 11 of his 12 free throws. He also led the team with four steals and three assists.

Akron would finish the half on a 10-6 run, with two Pat Forsythe free throws and a Johnson layup before Williams made two 3-pointers. The Zips would lead 36-29 going into halftime on the road.

Ohio fought back hard to start the second half. Baskets from Kaminski and Setty were followed by a Forsythe layup and another Kaminski 3-pointer to make it a 38-36 game. Moments later Jordan Dartis connected from deep and the Akron lead fell to one.

Later in the half, with the Zips leading by three, Dartis missed on a 3-pointer that could have tied the game with 13 minutes left. Senior Jake Kretzer would make him pay on the next possession with a 3-pointer of his own. After a pair of Kaminski free throws and a turnover from each team, Williams extended the lead to seven with his final 3-pointer of the day.

A Jaaron Simmons layup cut the lead to five before the game went into another scoring drought.

The Bobcats’ Mike Laster made one of two free throws over two minutes later before Robotham found McAdams for another 3-pointer to get the lead back to seven. But back-to-back baskets from Setty and Campbell made it a three-point game with eight minutes left to play.

A big moment in the game came after the T.V. timeout, when Robotham picked up a steal and found Williams, who got fouled. Williams made both free throws, and after Setty missed two free throws, Isaiah Johnson picked up two more points to once again extend the lead to seven.

But again the Bobcats fought back. Antonio Campbell made a layup off a Simmons assist, then came back to block a Johnson shot. Campbell was then fouled by Johnson and made both of his free throws. Johnson came back to score from inside, before Setty, Forsythe, Campbell, and Akron’s Antino Jackson all scored from down low within a minute and twenty-seven seconds to make the score 65-60 going into the final T.V. timeout.

Coming out of the break, Robotham made a pair of clutch free throws to get the lead back to seven. Simmons would go on to make two out of four free throws while the Zips got buckets from McAdams and Kretzer for an eight-point lead.

After Simmons once again made only one free throw, Robotham did the same. A Setty layup with 1:27 to go made it a seven-point game once again. However, Robotham would go on to make eight free throws in a row. Ohio could not put the ball in the hoop until a Gavin Block 3-pointer with 12 seconds left made the final score 80-68.

Free throws were a huge factor in the result of the game. Akron made 17 of 21 free throws while Ohio made just 12 of their 21. Turnovers also hurt the Bobcats, as they turned it over five more times than the Zips. The Zips’ bench came up big once again with Williams, Johnson, Kretzer, and Ivey totaling 45 points. Akron’s bench outscored Ohio’s 45-11.

The excellent bench allowed the team to stay fresh. Besides Robothams’ 34 minutes, no one on the Zips played more than 27 minutes — while no starter for Ohio played less than 29 minutes.

While Williams, Johnson, and Robotham had big scoring games for Akron, the excellent balance on the team remained. McAdams finished with eight points and four rebounds, making two 3-pointers.

Antonio Campbell led the way for the Bobcats in this one with 18 points and 12 rebounds. Treg Setty also finished with a double-double with 17 points and 10 boards. Kenny Kaminski rounded out the scoring with 12 points while Jaaron Simmons, who never left the game, totaled seven points and eight assists.

With a Kent State loss at Central Michigan last night, the Zips are in sole possession of first place in the MAC East. Akron is now 7-2 while Kent State, Buffalo, and Central Michigan are 6-3 in the conference. The Zips will get a rematch with Central Michigan this Friday when they return to Rhodes Arena for an 8 p.m. clash against a team that beat them this year.