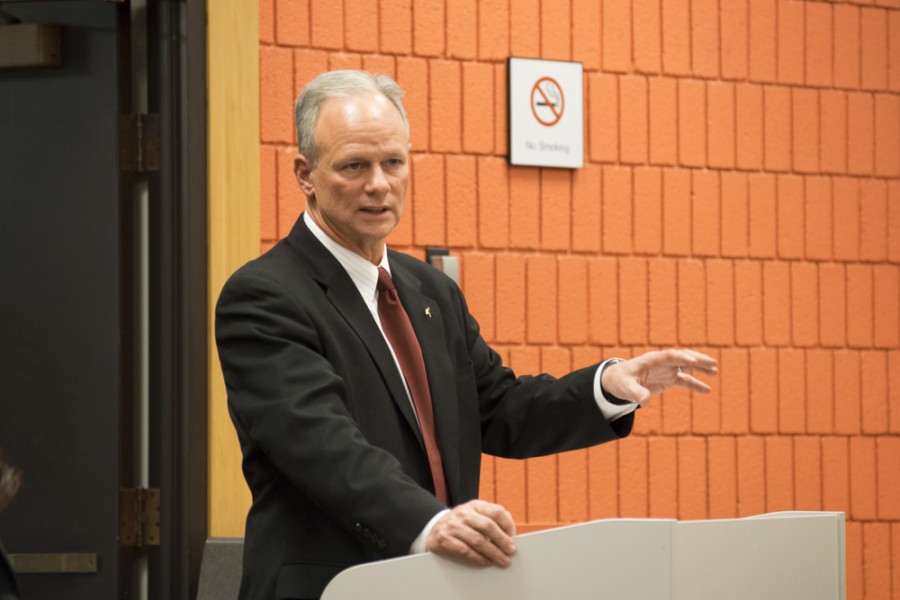 UA President Scott Scarborough speaks to the Faculty Senate on Thursday, Feb. 4, shortly before it voted 50-2 for a resolution of 'no confidence' in him.

By a count of 50-2, the UA faculty senate voted no confidence in President Scott Scarborough at its last meeting on Feb. 4, 2016.

The no-confidence resolution cited reasons why the “University has been negatively impacted over the past year,” including declining enrollment, miscommunication of the “$60 million problem,” reductions of key services, declining donations, constituent discord and faculty dissatisfaction.

It adds that shared governance has not been present on many administrative decisions, including rebranding, graduate assistantship decisions, faculty hiring, dean and director hiring, and outsourcing.

Political science professor Daniel Coffey chaired the ad hoc committee formed in the faculty senate’s Nov. 6 meeting to consider a no-confidence resolution. He gave a fervent speech in the debate before the measure’s roll-call vote, stressing that his committee didn’t agree on the final draft “until [they] could stand up and back up every single sentence that is in [it].”

Finance professor John Matejkovic, also on the ad hoc committee, was one of the two dissenting votes, and took time during debate to urge his colleagues to vote ‘no’ with him. While he says he disagrees with some of the president’s policies – namely the rebranding – he believes that all the blame cannot fall on Scarborough.

William Landis, a senator from the department of polymer science, said he would vote on behalf of all those whom he represents; and because 11 of his department professors agreed with the measure, three disagreed, and four abstained, he would therefore vote affirmatively.

The no-confidence resolution will now be sent to the UA Board of Trustees to consider in its next meeting on Wednesday, Feb. 10.

In a prepared statement, Board Chair Jonathan Pavloff had this to say:

“Shared governance works best when we come together and strive to find common ground in addressing the large challenges that we face.

“Given the overlapping membership between the Faculty Senate and the AAUP, and the status of current contract negotiations with the AAUP, it is perhaps not surprising that this vote outcome occurred.

“The University’s Board of Trustees remains firmly behind President Scarborough and committed to the strategy his team is implementing to make The University of Akron a truly great public university.

The no-confidence vote was not all that happened on Thursday.

Referencing pages and slides he has previously used in a packet everyone was given before the meeting, Scarborough made an hour-long presentation to briefly review his first two years at UA, and touch on other topics.

He said the two big problems he was hired to fix were finances and enrollment. The latter, he said, is declining because of population and demographic issues, UA’s move away from open-enrollment, and competition among students. A senator later questioned him as to whether there could be more reasons why early admissions numbers are unpromising. Scarborough, in response, said it could be because of less demand in individual colleges.

Scarborough also said UA’s satellite campus structure was immature, and that it needed to focus on non-traditional students and a nationwide satellite network to reverse financial woes and decreasing enrollment, though he could not comment on any dealings between UA and Higher Education Partners because of a nondisclosure agreement.

For now, he said, talks about international satellite campuses have been suspended to instead focus on more domestic issues.

Near the ending of the senate meeting, a moment after the no-confidence vote passed, mechanical engineering professor Dane Quinn stood to address the departing crowd about what to do next. Quinn was on the ad hoc committee that formed the resolution.

“[I don’t] feel like anyone won in this vote,” Quinn said. “Going forward, we still have a job to do. We have to work with the administration…we need to be willing to put aside any differences that we have for the good of the University, the good of our students, and the good of us all.”