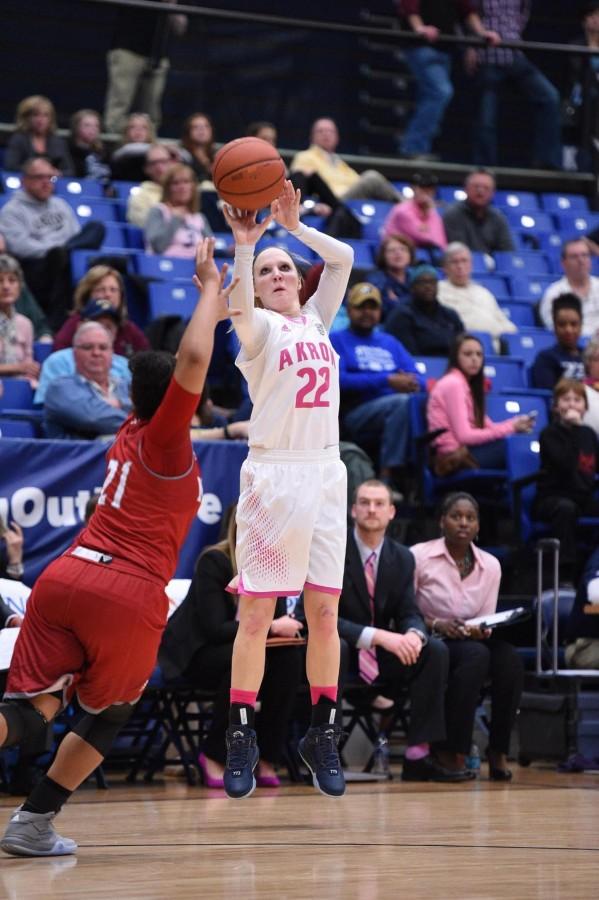 The University of Akron women’s basketball team beat the Miami RedHawks 77-65 on Saturday, Feb. 6, at James A. Rhodes Arena.

The rest of the Zips’ points came off the bench, as Ali Ball totaled six points and six assists, while Alex Ricketts and Megan Sefcik finished with three points.

Gibson had the hot hand early in the ball game, scoring the first five points and 10 points total in the first quarter. Gibson scored on the team’s first possession of the game, and then made a 3-pointer the next time up the floor. After a Brown layup, Gibson once again scored from deep to put the Zips up by two halfway through the first quarter. She would make another jumper with two minutes to go.

Ali Ball made her presence felt next. She made three free throws in the last minute-and-a-half of the quarter, giving the Zips a 17-14 lead. Then on the Zips’ first possession of the second quarter, Ball made a 3-pointer off a Megan Barilla pass to give the Zips a six-point lead.

After a Sefcik trey, Gibson took control of the game again by scoring the next six points, all off layups. Her last gave the Zips a seven-point lead for the third time in the quarter.

Miami would cut the lead down to two points after a Leah Purvis 3-pointer with just over three minutes left in the half. However, Akron would finish on an 8-2 run, as both Brown and Plybon made two free throws and a field goal.

The Zips would be outscored 22-16 in the third quarter, and if not for the heroics of Plybon it could have been much worse. Plybon would make four 3’s in the quarter for a total of 12 points. The third 3-pointer came off a 6-0 Miami run that gave the RedHawks a 48-47 lead. After Miami retook the lead, Plybon struck back with her fourth deep ball of the quarter to give the Zips a 53-51 lead, which they took into the fourth quarter.

The fourth quarter was scoreless for the first minute and a half — until Miami’s Megan Galloway made a free throw to make it a one-point game. Plybon came right back with a layup, and the Zips carried that three-point lead for the next 1:27, when Akron started a 6-0 run.

Gibson started the scoring with another basket down low, and Brown came back with a jumper and two free throws to give Akron a 61-52 lead with five-and-a-half minutes left in regulation.

Moments later the RedHawks would cut the lead to seven with a Purvis 3-pointer, but Plybon would come back with a trey of her own, her fifth of the day. After a Miami turnover, Brown went to the line and split her two free throws. Gibson would do the same on the next possession after a Molly McDonagh jumper. McDonagh came right back after the Gibson missed free throw and grabbed an offensive rebound and put it in to cut the Akron lead to eight.

Brown made a layup and a free throw and Plybon made three free throws before the RedHawks could score. Miami added a few buckets but the Zips escaped with a 12-point victory.

The Zips shot an excellent 47.2 percent from the field, and 40.9 percent from the 3-point line, to carry them. In comparison, the RedHawks shot just 33.3 percent from the floor and 24 percent from deep. Another big factor was turnovers, as Miami turned it over 18 times compared to the Zips’ 13. Finally, the Zips won despite being outrebounded 45-35.

The two teams will meet again on Feb. 24 in Oxford, Ohio. The Zips will enjoy a week off before they travel to Kalamazoo, Michigan to battle the Western Michigan Broncos on Saturday at 2 p.m.