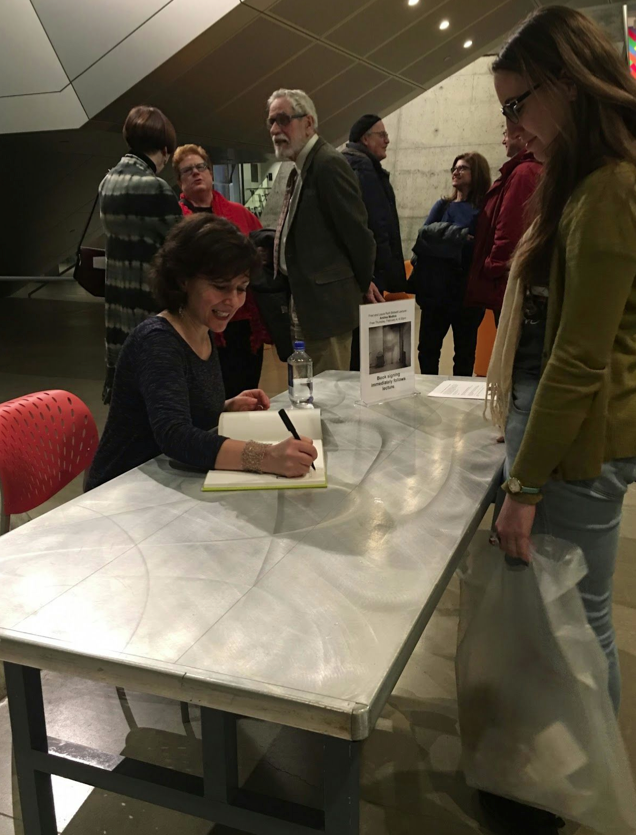 Adrea Modica signs books for admirers of her art.

“I live for photographing and its ability to transform what is in front of us,” said Andrea Modica, a nationally-exhibited photographer.

On Feb. 4, Andrea Modica visited the Akron Art Museum to talk on behalf of the Fred and Laura Ruth Bidwell Lecture series about her experiences with photography and creating artwork.

Modica was born in Brooklyn and got her start in photography in Manhattan. Her work has appeared internationally and nationally in collections such as The Museum of Modern Art in New York City and The Museum of American Art in Washington, D.C.

“I am living my dream,” Modica said. She said she has always wanted people to appreciate her work.

Modica noted the risks in traveling the world just to get the perfect photo, but said that “[she] had to get the job done.” There was nothing stopping her from being an artist.

During the lecture, Modica stated that most of her photos don’t have much meaning and it’s up to the audience to decide.

Modica said that she is attracted to photography because it is “something that looks easy, but isn’t.” She works with a large camera and platinum palladium contact printing to get her photos because she found that working with a small camera was “too fast.”
Modica said photography takes a “50/50” effort: half of the photo is what is put into it, and the other half is letting the world run its magic.