Key issues on the table 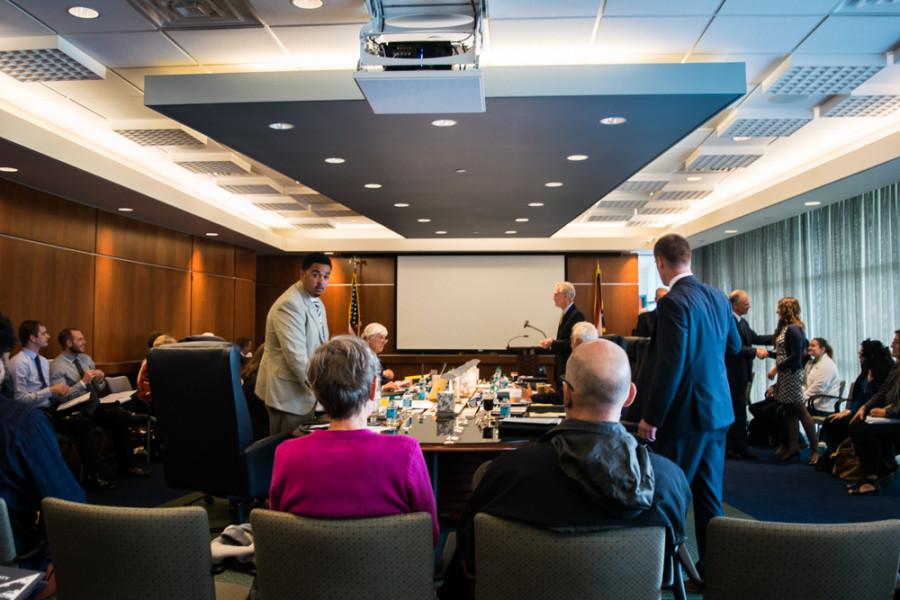 According to University spokesman Wayne Hill, the “proposed course fees” mentioned in this article are for law students in the UA School of Law’s international program in Asia, and for Fire and Hazardous Materials students for the purchasing of protective clothing.

After an eventful week in which the Honors College received a $3 million gift and changed its name, and the Faculty Senate voted Thursday 50-2 in favor of a no-confidence resolution against President Scott Scarborough, the UA Board of Trustees will meet tomorrow, Feb. 10, in the Student Union room 339.

The Board’s executive session starts at 8 a.m., but the public is not allowed in this meeting.

The public session will follow a 15-minute break after the executive session, and will begin no earlier than 10 a.m. On its agenda are “proposed course fees,” financial and investment reports, and a report on donations, among other topics.

It is unclear precisely when the public session starts, as the executive sessions vary in time. Usually it is not until around 11 a.m. or even 12 p.m. A safe bet is to arrive around 10 a.m. and wait outside the boardroom doors in the Union third-floor concourse.

Or join the protest.

Protests over administrative and Board decisions have happened at each Board meeting since Oct. 14, 2015. Tomorrow’s will begin at 9 a.m. and likely include members from most University constituencies – students, faculty, staff, Akron residents and others.

The Akron chapter of the Ohio Student Association and Anonymous Akron will also be making a showing.

Their grievances trace a line of contentious decisions made by University leadership since last summer, which culminated in last Thursday’s Faculty Senate vote of “no confidence” in President Scarborough.

That resolution will appear for a vote by the Board in tomorrow’s meeting, but Board Chair Jonathan Pavloff has already explained his opinion on the matter, saying the Board is “firmly behind” Scarborough and his team.

Pavloff also said the no-confidence resolution is not surprising given the difficult state of faculty union negotiations.

However, both John Zipp, president of the Akron chapter of the Association of University Professors; and William Rich, chairman of the Faculty Senate and law professor, have come out with statements challenging Pavloff’s dismissal of the vote as an outcome of problematic contract negotiations, as first reported by The Devil Strip.

And faculty were not the only ones who voted, either. UA’s Undergraduate Student Government (USG) has two representatives on the Faculty Senate: USG president Taylor Swift and USG senator Cassaundra Spaeder. Both voted in favor of the resolution.

UA’s Graduate Student Government has one representative on the Faculty Senate, Briyanna Elliott, but she was not present on Thursday’s meeting.