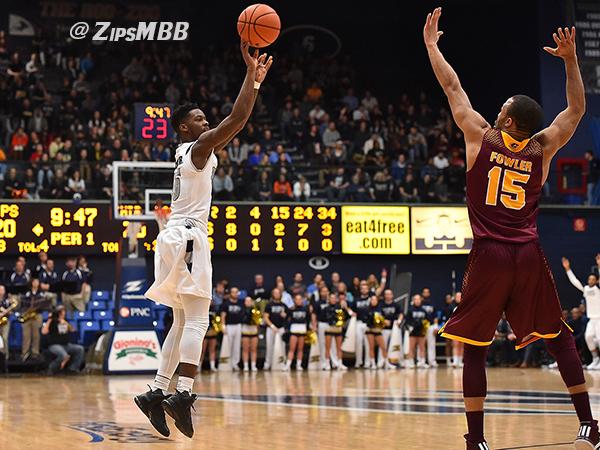 The Zips racked up their 20th win of the season Tuesday night.

Antino Jackson made a career high six 3-pointers to lead the University of Akron men’s basketball team to an 83-68 victory over Bowling Green on Tuesday.

The win improved the Zips to 20-4, securing yet another 20 win season for coach Keith Dambrot. After a 19 win first season with Akron, Dambrot has won at least 20 games in each of the past 11 seasons. The Zips are now 9-2 in conference play and have a two game lead over Kent State and Buffalo at the top of the MAC.

Although the Zips came away with the victory, it could have come with the tragic loss of center Isaiah Johnson. Johnson left in the second half with what appeared to be an ankle injury. It would be a significant loss if the team’s scoring leader misses an extended period of time.

Something that could help with the potential loss of Johnson is the reemergence of starting center Pat Forsythe. Forsythe, who had battled through injuries for much of the season, had a strong game Tuesday night. Forsythe scored ten points and grabbed four rebounds, while making three of five shots from the floor and four of five free throws. Forsythe had been held to under ten points in five straight games before Tuesday. If Forsythe can return to his pre-injury form, which saw him score in double-figures in six straight games from November 24th through December 21st, it could take some of the pressure off of Johnson to return.

The game started off slow for the Zips, with the exception of Forsythe. Forsythe had four points in the first 2:12 of the game, but the rest of the team started off cold. This allowed the home Falcons to go on an 8-0 run that gave them an early 10-4 lead. A Johnson layup broke up the run, and guard Noah Robotham scored on the next possession. However, the Falcons could not be stopped and extended their lead to 20-9 nearly halfway through the half.

That is when the Zips finally made their run to get back in the game. Akron scored five straight times up the court and locked down the Falcons attack to go up by one point just 2:41 later. Johnson started it off by pounding his way to a layup. Next, senior Reggie McAdams found Robotham for a 3-pointer. Forsythe came down on the next possession and showed off his range with a mid-range jumper, then Antino Jackson made a long ball, his first of many on the night. A pair of Forsythe later and the Zips had a 21-20 lead.

The next five minutes of the game was all Antino Jackson. Following a Bowling Green basket, Jackson took a Kwan Cheatham Jr. steal and connected from deep to take the lead back. Several possessions later, after a Cheatham Jr. blocked shot, Jackson made another 3-pointer. Each team would add a layup before Jackson would once again hit a trey. Two possessions later Jackson did it once again to extend the Zips lead to 35-26 with 4:18 left in the half. Jackson finished with 20 points to lead the Akron attack.

Johnson finished with 15 points, and he would score the next four points for the Zips. Jimond ivey would also add a layup before the half, and the Falcons’ Spencer Parker scored their last six points of the half. Parker finished with a game-high 23 points.

The Falcons would start off the second half on a 9-3 run to get back to within three points. McAdams was responsible for the Zips’ three, which became a recurring theme in the second half.

Jackson made another 3-pointer to put Akron back up six, but Bowling Green went on to score the next six points to tie it up. That’s when McAdams connected from deep again, and that started a Zips run that Bowling Green could never fully recover from. Robotham made one free throw on the next series, and after several scoreless possessions McAdams made it a 7-0 run with his third 3-pointer of the half.

Demajeo Wiggins ended the run, but Johnson came right back to score the Zips’ next five points. The Falcons once again would not quit, however. Antwon Lillard made a basket from underneath before Matt Fox made a 3-pointer and Parker put home a Lillard pass to make the score 59-57 with under eight minutes left.

Lillard had the opportunity to tie the game the next time up, but missed both of his free throw attempts. Forsythe came right back with another jump shot, and a few possessions later Akron got back-to-back-to-back 3-pointers from McAdams, Ivey, and Jake Kretzer. The Falcons would score on consecutive trips before Kretzer again made a 3-pointer, and the Zips lead was 73-61 going into the final TV timeout.

But the Zips’ 3-point barrage was not done. Following a couple of Falcons baskets, Robotham sent the game back to double-digits with a trey of his own. Finally, with just 32 seconds left and the Zips leading by 12, McAdams made his fifth and final deep ball of the game to give the Zips an 83-68 victory.

For the second straight game the Zips made 16 out of 32 3-pointers. In comparison, Bowling Green shot just 5-15 from deep. Also, Akron shot 73.3 percent from the foul line while the Falcons made just 57.9 percent of their shots from the charity stripe. Finally, Falcons were outrebounded 34-28, including 7-4 on the offensive glass.