Could Trustees’ meetings be more timely?

How other Ohio university boards run their meetings 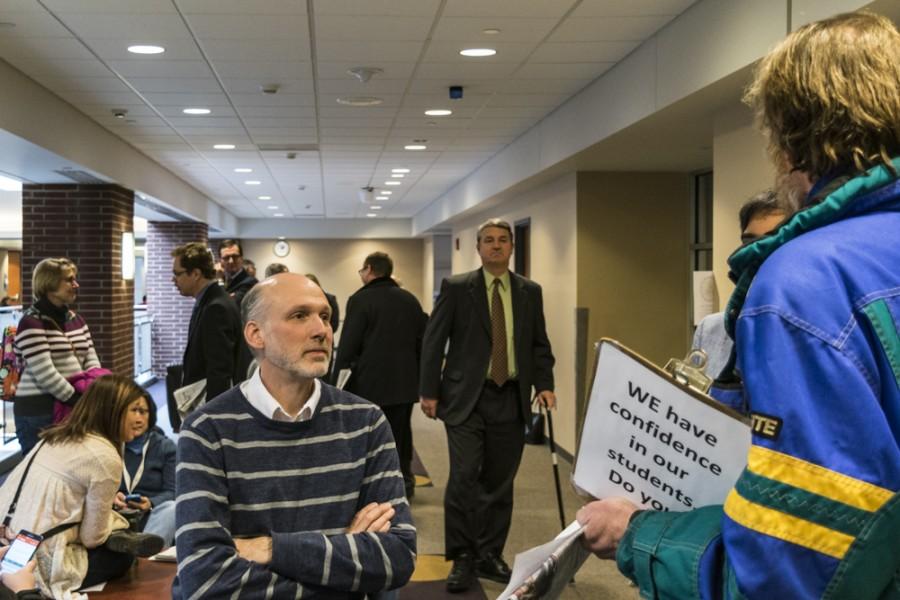 Students, faculty, and administrators waiting for the board meeting's public session to begin.

Yesterday at The University of Akron’s Board of Trustees meeting, the public had to leave the room when the Board opted to resume its private executive session.

The Board had already met in executive session that morning.

Chairman Jonathan Pavloff announced that the Board had concluded its public business, but it would return to executive session to consider public employee compensation and review collective bargaining.

Ohio law allows public universities to hold executive sessions to discuss employment, the purchase or sale of property, collective bargaining negotiation, and legal counsel. Only the trustees and those they invite may sit in on these sessions.

UA’s board meetings usually begin with an executive session at 8 a.m. The length of these sessions varies, with the public session starting “no earlier than 9 or 10 a.m.” The public, however, is not told precisely when the latter will begin. Frequently this results in a crowd of faculty, students, media, administrators, and sometimes protesters waiting outside the Student Union room 339 for the public session to begin.

The Board maintains the ability to call an executive session at any time with a roll-call vote — like what happened yesterday. If the Board needs to act on matters discussed in executive session, it will consider them in private, but can only vote on them in the public session.

Jane Bond, a retired Summit County common pleas judge, sat on the UA Board from 2008 to 2012. After its Oct. 14, 2015 meeting, Bond called the Board “disrespectful” for making the public wait until 11:18 a.m. before the public session started.

A similar story has occurred at most of the recent board meetings, all of which included executive sessions that ended at:

Assistant Secretary Ted Mallo said in an email that the Board sometimes needs to draft documents in executive session in order to take formal action in public session. “Thus,” Mallo wrote, “holding the executive session at the commencement of the meeting generally facilitates the conduct of the Board’s meetings.”

At several other public Ohio universities, Boards of Trustees structure their meetings in ways that are, arguably, more accessible.

Kent State University spokesman Eric Mansfield said its Board posts the agenda multiple days before the meeting, like UA. But KSU sends out the time intervals for its executive sessions, public committee meetings, and public sessions beforehand as well.

Mansfield said the schedule changes every month, but “we try to have the agenda out there multiple days before the event, and then we let the media know exactly what time [things start].”

The minutes of the fourth meeting in December have not yet been approved.

According to Joan Stasa, secretary of the Board of Trustees at the University of Toledo, the Board decided to hold its committee meetings at 1 p.m. for the 2015-2016 year. At 2 p.m., its meetings open to the public. Executive meetings are held after the public session — and only if needed.

“The purpose of holding our executive sessions towards the end of the meeting is that the trustees don’t want to hold up attendees and presenters since it is difficult to determine how long an executive session will last,” Stasa wrote over email.

Ohio University’s Board of Trustees follows a similar structure to UA’s. Secretary David Moore said its main board meetings, which are public, are held on Fridays at 10 a.m. Executive sessions, if needed, are typically held that morning. According to the minutes of the last six meetings, no public session has opened later than 10:19 a.m.

Additionally, the OU Board gives the press an opportunity to question the board chair, president, provost, and vice president for finance and administration. Moore said this media session usually lasts about 30 minutes.

No such session occurs at UA’s board meetings.

Kevin Kern, a history professor at UA, regularly attends protests outside board meetings to show solidarity with students. After the meeting yesterday, he voiced frustration at the lack of communication between the Board and its stakeholders.

“Access to the board has been tightly controlled, and there is no allowance for the public to voice concerns at the meetings themselves,” Kern said. “I believe the kind of ‘cone of silence’ around the board that results actually does the board a disservice, because it hampers the members’ ability to make fully-informed decisions on important issues.”

The Board’s next meeting is scheduled for no earlier than 9 a.m. on April 13, room 339 in the Student Union.