Board responds to calls for change

Trustees meet amid calls for change in leadership, votes of no confidence, ad campaigns 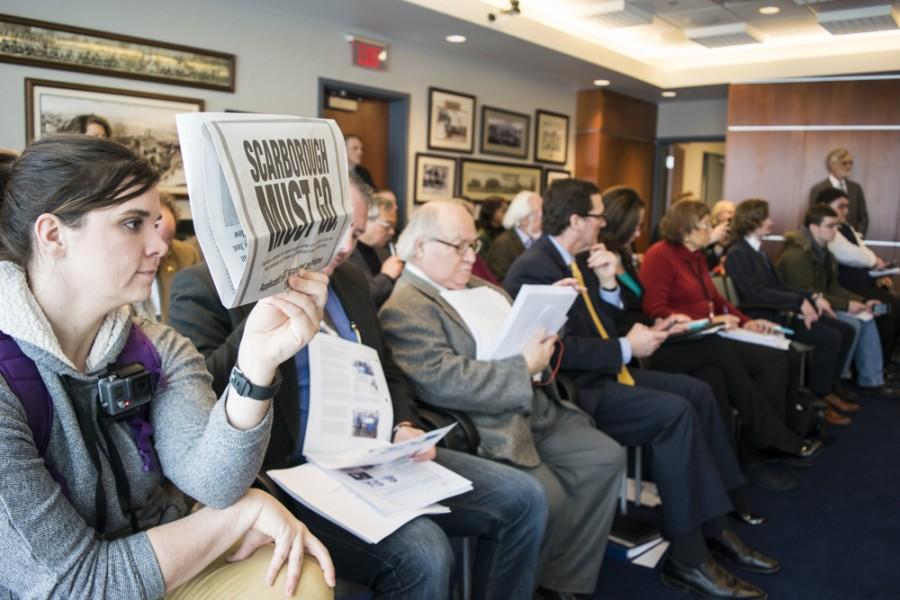 Ashley Bair silently protests by holding up the Akron Beacon Journal "Scarborough must go" ad at a Board meeting.

In the printed version of the article, UA Board of Trustees Chair Jonathan Pavloff is introduced only with his last name, and without reference of what position he holds at UA.

After the faculty senate’s near-unanimous vote of no confidence in President Scott Scarborough, and a more recent letter from academic chairs and directors requesting change in UA leadership, the UA Board of Trustees acknowledged at its meeting yesterday the gravity of these indictments.

“The [Board] understands the serious nature of these comments,” Board Chair Jonathan Pavloff said before a packed gallery of about 45 in the public portion of the meeting. “It is a situation where if we are not successful in finding resolution, all involved lose. Now’s the time to coordinate our efforts.”

Pavloff, who was recently criticized for dismissing last week’s no-confidence vote as a repercussion of poor faculty union negotiations, said he will meet with William Rich, law professor and chairman of the UA faculty senate, to “explore opportunities to cooperate in expanding the foundation…for the success of our students.”

Out of the 31 of UA’s more than 40 academic directors and chairs who voted, 26 approved of the letter sent Tuesday to the Board of Trustees and the Ohio Department of Higher Education.

Citing threats to academic scholarship, concerns about University direction under President Scott Scarborough, and ominous admissions and donations numbers, the letter called for “an immediate change in direction and leadership at our University.”

“…morale on campus is at the lowest point we have seen in over 30 years,” the letter continues. “[It] is already leading to the loss of our best scholars, as they choose jobs elsewhere, and will reduce our ability to attract the best scholars moving forward.”

Also yesterday, the group calling itself Advocates for the University of Akron, Students and Faculty began another ad campaign to change University leadership. This is the same group that ran the similar “STOP,” “PLEASE,” “HELP” campaign in December 2015, which was signed by more than 300 community members in multiple ads placed in the Akron Beacon Journal.

“Scarborough must go,” said the group’s most recent three-quarter-page ad in enormous, bold letters in the Beacon Journal’s Wednesday issue. It listed beneath the names and emails of all UA’s trustees, urging people to contact them and “voice your concerns.” More ads will run this Friday and Sunday, Feb. 12 and 14.

Many sympathizers to this campaign gathered outside the executive session of yesterday’s Board meeting for a protest; however, the group was not as large as many prior.

Here were some of the things that happened in the public portion of the Board meeting:

Not taking into account gifts-in-kind, then, total cash donations were down nearly 19 percent in July to December of 2015 compared to the same time in 2014, and down 46 percent from the peak in 2011.

Two course fees were approved, one for students in the UA School of Law’s international program in Asia, and one for the purchasing of protective equipment for Fire and Hazardous Materials students.

Twelve positions in Dining and Food Services were abolished, with two of those who held those positions moving to Aramark, the company to which UA’s Dining Services was outsourced last summer.

After about an hour in public session, the Board voted to go back into executive session to discuss employee compensation and collective bargaining, and the gallery had to leave.

“The encouraging thing is there was at least a recognition that the [no-confidence vote and academic chair and director letter] was something to be taken seriously,” said Pamela Schulze, UA professor and secretary of the faculty senate. “That [Pavloff] intends to work with [William] Rich is positive as well. I’m guardedly optimistic.”