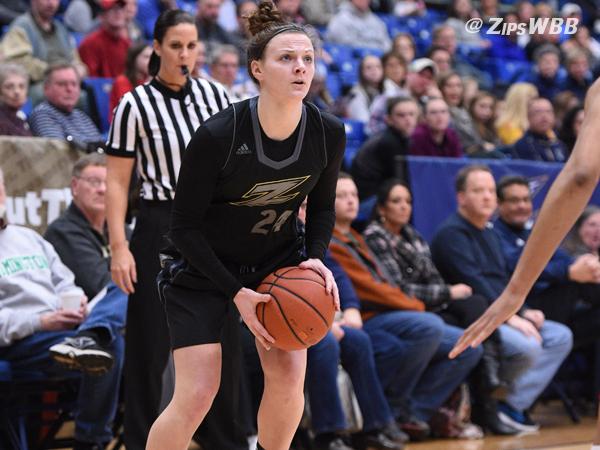 Despite their loss, Alex Ricketts lead the Zips with 12 rebounds Saturday afternoon.

The University of Akron women’s basketball team was outscored by the Western Michigan Broncos 27-10 in the fourth quarter to lose 69-65 on Saturday in Kalamazoo, Michigan.

Western Michigan had five players score in double figures on the night. Meredith Shipman led the way with 16 points, while Alex Morton finished with 14 points. Each player made all four of their free throw attempts. Forward Breanna Mobley totaled 13 points while hauling in 11 rebounds, and Alexis Parks and Meredith Miller added ten points each.

Akron went into the fourth quarter with a 55-42 lead, but it quickly evaporated. The Broncos went on to score the first nine points of the fourth quarter off seven free throws, and the Zips’ lead was down to four. Plybon came right back with a 3-pointer to give the Zips a seven point lead again. The Broncos would continue to fight, getting the game back to three points with the help of two Parks baskets. Plybon would make one of two free throws, and on the next possession Western Michigan’s Shipman made a 3-pointer to make the score 59-58 with 4:18 to go.

After nearly two scoreless minutes, Western Michigan took their first lead since halfway through the second quarter with a Miller layup. Gibson came right back to make one free throw to tie the game. The Broncos again took the lead with a Miller layup, and the Zips came back with two more free throws to tie it up. With one minute left, Jessica Jessing gave the Broncos a lead with a layup, and the Zips would never come back. Western Michigan would extend the lead to five before Lilli Piper made a 3-pointer. Shipman would make both of her free throws after that, and Akron couldn’t score as the Broncos wrapped up a big conference win.

The Zips got their big lead in the beginning stages of the third quarter. Leading by one, Akron went on a quick 6-0 run. Plybon scored all six points, including a 3-pointer off a Gibson assist.

Each team was nearly identical from the field, the free throw line, and in the rebounding category. However, The Zips went 9-23 from deep while the Broncos made only two of their 13 3-pointers. Possibly more important, the Zips turned the ball over eight more times, while they were outscored 40-26 in the paint. Additionally, the Broncos’ bench outscored the Zips’ bench 20-11.

The Zips will get back to the hardwood on Wednesday for a big rivalry matchup with Kent State at Rhodes Arena in Akron. Kent State is just 4-17 overall and they are only 1-10 in MAC conference play. The Golden Flashes are 0-9 in road games while the Zips are 7-3 at Rhodes Arena. The Zips will try to stop sophomore Jordan Korinek, who is tenth in the MAC in scoring. Game time is schedule for 7 p.m.