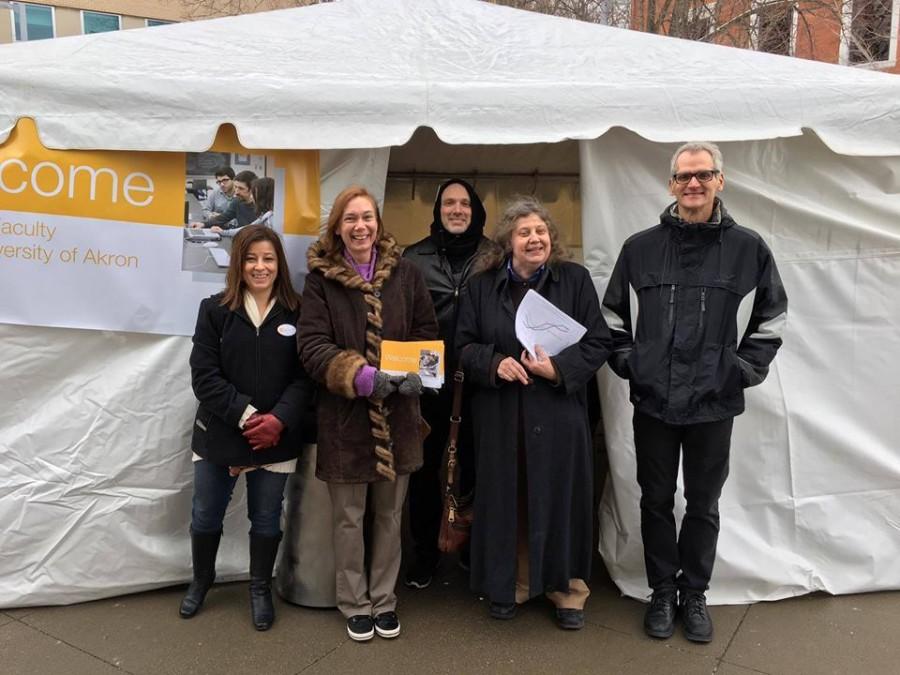 In an effort to show their support for a fair contract, and to send a positive message to prospective and current students, faculty members from the Akron American Association of University Professors (Akron-AAUP) handed out nearly 1,000 cards outside of the Student Union to those attending Senior Day on Monday, Feb. 15.

Kate Budd, an associate professor of art and organizer of the event, said AAUP wanted to do something positive to try and counteract the negative publicity about The University of Akron in the press this past year.

The cards welcomed prospective students and listed ways the faculty will provide for them with statements such as “We, the faculty, are fully committed to furthering the academic mission of the university” and “We, the faculty, do everything in our power to ensure that you will earn not just a degree, but also a top-notch education to help you in your career.”

The faculty offered cookies and hot chocolate while speaking with students, their families, and members of the University community.

“Morale is very low amongst the faculty right now, and it was important for us to do something concrete and positive to help the situation,” Budd said. “We want to help, and we know that getting the focus back to the learning environment is a big part of the solution.”

According to its website, the Akron-AAUP is focused on getting students quality education at UA and believes that “the University administration must prioritize the educational mission of the institution in a way that places academic instruction and student learning first.” Essential to its goal are “faculty who are fairly and competitively compensated.“

“This is why we are fighting so hard at the negotiating table — because we need a fair contract to be able to retain and attract the best faculty we possibly can,” Budd said.

Budd was told that their group could not pass out cards inside the Student Union, because solicitation wasn’t allowed there. She found this surprising, and noted that they were doing exactly what the Senior Day organizers were doing: welcoming prospective students.

“The only other problem was that after everyone came back outside, a student tour group leader blocked me from passing cards,” Budd said. “When I asked him about it, and showed him our cards to let him know what we were doing and that he didn’t need to worry, he said he didn’t have a problem with us, but the tour leaders had been ‘warned to look out’ for faculty.”

The Akron-AAUP’s website states that there has been progress on non-economic issues, but it now faces difficult negotiations on compensation and health-care benefits. The website also states “The Akron-AAUP regards the University’s salary proposal as entirely insufficient, and the increased costs of health care plans, and aggressive phase-out of retiree spouse and dependent coverage, all as punitive, unnecessary, and indefensible.”

The Akron-AAUP is still in the process of negotiations, and if it is unable to reach an agreement on disputed issues, the issues will be referred to the “fact finding process.” The process is a method for resolving issues in collective bargaining with an independent third party.

President of Akron-AAUP John Zipp said it is too early to assess the probabilities of various labor actions, including a strike.

“We are still in negotiations; just two weeks ago, Board of Trustee Chair [Jonathan] Pavloff released a statement in which he expressed the Board’s commitment to negotiating in good faith, and we share this commitment,” Zipp said.

Zipp said it is rare for unions to strike, and hopes they are not forced to go there.

A picture of a button on Akron-AAUP’s website reads “I Don’t Want to Strike But I Will.”

“Negotiating sessions continue to be held with the AAUP chapter but we believe it is best not to make any public comment about the status of those discussions,” UA spokesman Wayne Hill said.

Budd said the faculty got a morale boost from being able to do something positive.

“By coming out with such great spirit in horrible weather conditions to welcome students and their families, we demonstrated our commitment to The University of Akron, and that we care deeply about our students,” Budd said.

According to Zipp, there are no similar events planned, but says the Akron-AAUP is well-organized to mobilize a considerable number of faculty quickly if needed.

“It is quite important that no one underestimate the resolve of the faculty to obtain a fair contract,” Zipp said.