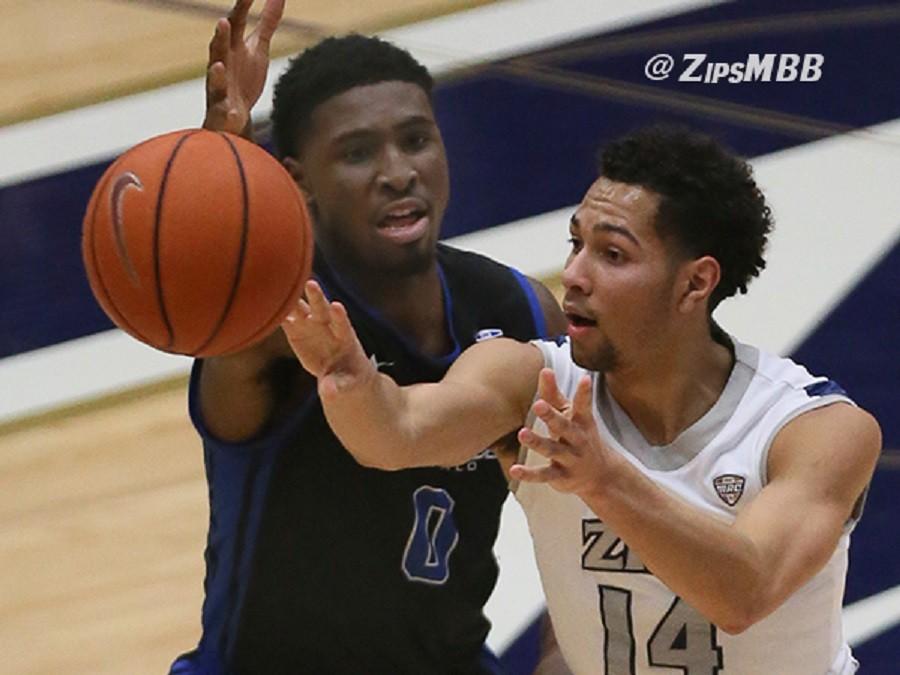 Noah Robotham had 16 points and 6 assists to help Akron to a 80-70 win over Buffalo.

The University of Akron men’s basketball team ran its home record to 12-0 with an 80-70 victory over the Buffalo Bulls Tuesday evening before fans at James A. Rhodes Arena in Mid-American Conference action. Antino Jackson scored 20 points and Isaiah Johnson grabbed 11 rebounds to go along with his 14 points to lead the Zips, who outscored Buffalo 47-34 in the second half.

Noah Robotham added 16 points and 6 assists and Reggie McAdams chipped in 13 more to round out the four Zips (21-5, 10-3 MAC) who hit double figures. CJ Massinburg led the Bulls with 21 points.

The opening half was all about streaks as the two teams battled out on the floor. The first five minutes of the game belonged to the Zips as a three pointer by Jake Kretzer gave Akron a 15-9 lead with 14:56 left in the half.

Following a series of trading baskets back and forth, Akron had a 20-19 advantage on an easy layup from Johnson with 11:33 on the clock.

Over the next eight minutes the Bulls outscored Akron 17-3, highlighted by a Massinburg layup to give Buffalo a 13-point advantage at 36-23 with just under four minutes still to play in the first half.

Not to be out done, Akron managed to shut down Buffalo the rest of the half and create scoring opportunities of their own that resulted in 10 consecutive points by the home team going into the intermission cutting the lead 36-33.

Akron survived the opening half by only trailing by 3 despite shooting just 33 percent (11-33) from the field, including a dismal 25 percent (4-16) from long distance.

The second stanza began with Akron’s Antino Jackson outscoring Buffalo 5-2 in the first 30 seconds to knot the game at 38. Jackson had led the Zips in scoring in the first half with 10 points.

With the score at 41-40 Buffalo, a layup and a three pointer by Robotham sandwiched around a Johnson inside shot capped a 7-1 spurt by the Zips which prompted Bulls Coach Nate Oats to take a 30-second time out.

After the timeout, the Bulls turned the ball over and McAdams nailed a bomb to give Akron another eight point lead at 50-42 at the media timeout with 15:11 remaining in the game. This was the first of three consecutive 3-pointers from McAdams with the last giving the Zips their largest lead at 56-45 with 14:37 still to play.

Buffalo was able to cut the deficit to 61-59 on a three point shot from Jarryn Skeete and an old fashioned three point play from Rodell Wigginton. They eventually tied the game at 64 on a layup by Nick Perkins with 8:20 to play.

Akron, who had hit their first nine of 12 shots to start the second half, had suddenly gone cold hitting only two of the next eight.

The momentum of the game changed at the 6:45 mark when Akron was able to break the tie after Perkins was called for a foul and then a technical foul for arguing. Robotham split the free throws from the technical and Johnson canned both of his for a 67-64 Zips lead. Another bomb from McAdams and another bucket and free throw from Johnson and the Akron advantage was at nine once again.

The final nail in the coffin coming with 1:43 left in the game when Robotham canned his fourth 3-pointer,  to give the Zips their largest lead of the game at 80-68.

The victory still leaves Akron in the top spot in the MAC East standings with Ohio University and Kent State two games behind with five conference games remaining. For the Zips, two of those games are against rival Kent, including on the road this Friday and another matchup against Ohio on March 1.