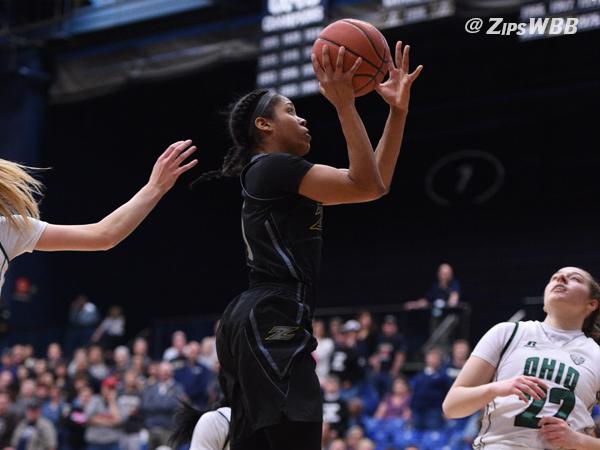 Brown led the game with 29 points, and she was the only Zip to score in double figures. Brown went 9-21 from the field and 10-14 from the foul line, and she grabbed seven rebounds. Sharpshooting guard Hannah Plybon finished with eight points and six rebounds, while making just one of her nine 3-pointers. Lilli Piper came off the bench and scored eight points, and starting forward Diandra Gibson added six points. Several reserves got extra playing time in the blowout loss; including Lauren Hung, who scored six points, and Megan Sefcik, who added five.

The Zips started out strong in this one, even taking a lead into the second quarter. Ohio would start the game with a quick 6-0 lead, but that is when Brown took over. She would score the first nine points for the Zips, giving the Zips a 9-8 lead. Brown scored again after a Piper layup, and finished the quarter with a pair of free throws.

The second quarter was not so good, as the Bobcats outscored Akron 29-12. The Bobcats went on a 21-5 run in the final 5:55 of the quarter, getting baskets from seven different players. Ohio took a 42-27 lead into halftime.

Akron fought back hard in the third quarter, but were still outscored 33-25. Plybon had a strong effort to start the half, as she made a 3-pointer on the second possession and followed with three free throws 37 seconds later. Brown had another strong quarter, scoring nine points, including four free throws and one 3-pointer. Despite these efforts, Ohio took a 75-52 lead into the fourth quarter.

By the halfway point of the fourth quarter, the Zips had pulled Brown, Plybon, and Gibson. The Ohio lead got all the way up to 34, at 101-67, before the Zips received 3’s from Sefcik and Hung.

Ohio shot nearly 50 percent from the floor and made 13 3-pointers in the win. The Zips outrebounded Ohio 51-41, but also turned the ball over seven more times. Finally, Ohio’s bench outscored Akron’s 41-27.

The Zips have four games left before the MAC tournament, and the top four teams will get a bye. The Zips are three games behind Toledo and Ball State for the three and four seeds, so Akron will most likely play a home game in the first round of the MAC tournament.