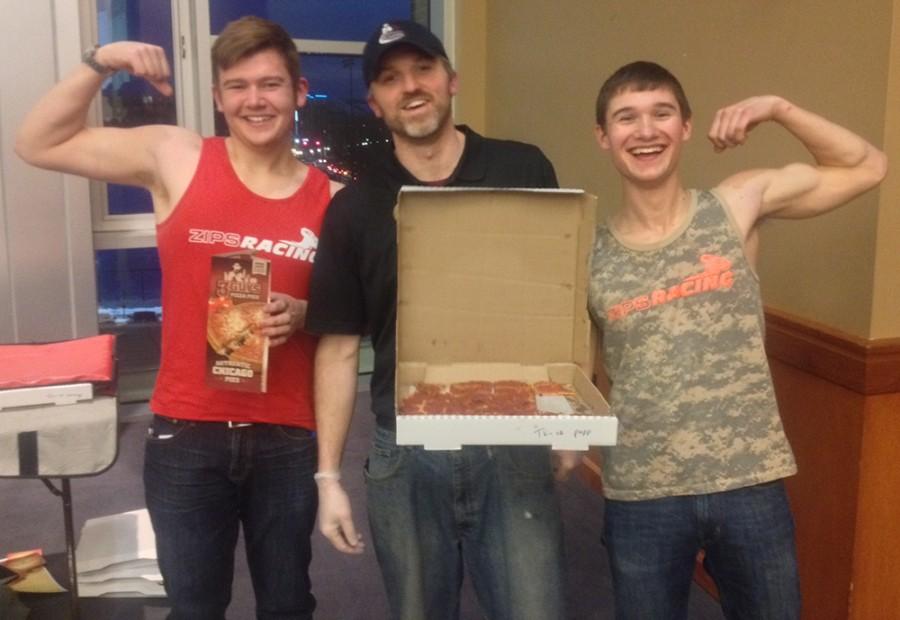 Over 90 students voted to decide The University of Akron’s Next Top Pizza at a fundraiser event on Feb. 18. The $1,000 raised will be donated to the Akron Canton Food Bank.

UA’s Interfraternity Council hosted the event for the third year in the Student Union with pizza — lots of pizza. For 10 dollars ($7 presale), students were able to sample slices from local Akron pizzerias using vouchers handed out at the door, which allowed them one slice of the participating pizzerias.

Hillegass said attendance and participation may vary from year to year, but “supporting the foodbank is [the] sole goal.”

Many of the attendees belong to fraternities, sororities, co-eds, clubs, and teams. Phi Delta Theta, Kappa Kappa Gamma, Alpha Phi, Tau Kappa Epsilon, Alpha Phi Omega and the Panhellenic Council were some of the fraternities and sororities that voted for UA’s Next Top Pizza.

Andreas Piña, graduating business major, said he began preparing earlier in the week. While eating pizza slices into the double digits, Piña stressed his regimen — “coffee for breakfast, stretching the gut with tacos at lunch, and no denim. Elastic is key.”

The event was a hit with many students as it allowed them to sample lots of pizza and contribute to a worthwhile cause.

Ezra Malerne, senior engineering tech student, said “it seems a little ironic, stuffing your face with pizza to support food banks.” However, Malerne was happy that 100 percent of money spent on the ticket was going to a charitable organization.

Halfway through the event, pizza reinforcements from several of the vendors entered the room to loud applause. Towards the end of the evening, vendors occasionally ‘forgot’ to collect a voucher and happily handed over pizza to students who had bought a ticket. Soda, water, and chips were also served.

From table to table, the ‘top’ pizza seemed to be an item of contention — but at the end of the voting, the students of UA had spoken: first-year competitor 3 Guys Pizza Pies became UA’s Next Top Pizza.

Engineering students Ryan Harty and Matthew Yoder described the event in unison as “incredibly badass.” They are looking forward to next year’s competition.

In true charity, all un-opened pizzas were donated to the Haven of Rest, a homeless support organization located in Akron.