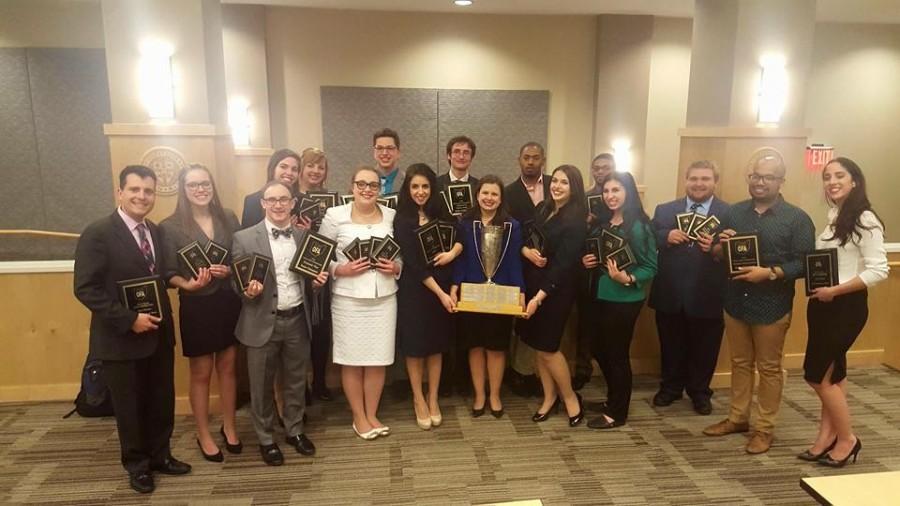 Photo courtesy of The University of Akron speech and debate team

Last weekend The University of Akron’s speech and debate team won its first state title since its rebirth in 2001 at the Ohio Forensics Association (OFA) state tournament in Columbus.

Led by head coach Mark Rittenour and graduate assistant Amanda Layman, the team competed on both Friday and Saturday at Capital University.

“I have never met a group of people who have worked so hard to achieve a goal and that are so passionate about the exchange of ideas,” Zerull said. “Our team spent hours preparing for this tournament, and clearly the hard work paid off. I couldn’t be more proud.”

Because she was among the top two speakers in persuasion, Zerull will travel to University of Nebraska Omaha in April to compete in the 141st Interstate Oratorical Association Contest, the nation’s oldest oratorical speech competition.

Hill, a freshman, placed fourth in rhetorical criticism, fourth in impromptu, and third in individual sweepstakes.

This was the last state tournament for Alyssa Gieseck, a senior and three-year member of the team. She took home second place in rhetorical criticism, sixth place in after-dinner speaking, fifth place in persuasive speaking, and fourth place in duo interpretation with her partner Abby Zerull.

The team will travel to Bowling Green State University for next weekend’s competition through Feb. 26- 27.