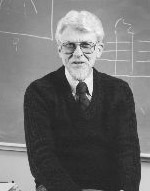 Photo courtesy of The University of Akron.

On Feb. 14, Donald McIntyre of the Department of Polymer Science passed away at the age of 87. He attributed 30 years of service to The University of Akron in his field.

McIntyre grew up in Detroit and found his passion for chemistry in high school. He encountered

several teachers that influenced him to pursue a career in research.

In 1949, McIntyre received his bachelor’s degree in chemistry at Wayne State University. He went on to complete a doctorate in physical chemistry from Cornell University in 1954.

Although he was no longer active on campus, his presence still surrounded many who continued to work there. He mentored several incoming professors in his field of study who greatly appreciated him.

Foster also discussed McIntyre’s concern for his colleagues’ personal life and said that he was an accomplished musician along with all of his other achievements.

“Dr. McIntyre would always answer any questions I had. He was a scholar, gentleman, classical professor, and wonderful person,” Cheng said.

Cheng said McIntyre set up and refurbished the procedures set out for the field of polymer science, and created a democracy within that department and a distinct writing style that is still used today.

During McIntyre’s 30 years at UA, he affected those around him and played a key role in the department of polymer science.