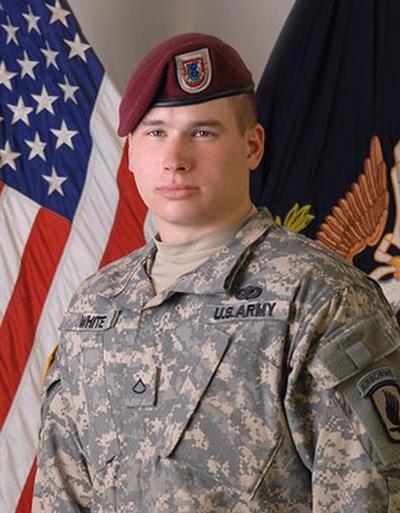 Photo courtesy of The University of Akron

A Medal of Honor recipient came to The University of Akron on Friday, Feb. 19 to speak about his time spent on duty overseas.

Army Sgt. Kyle White received a Medal of Honor, the U.S.’s highest military honor, on May 13, 2014, for his courageous actions in Nuristan Province, Afghanistan when his team was attacked in “ambush alley.”

“After being knocked unconscious for a short time during the attack, I tended to my wounded team members as enemy fire continued. I pulled one wounded team member under the safety of a tree as bullets flew past us,” White said, pulling back his sleeve and showing the Student Union Theatre audience a silver bracelet on which his team members’ names were engraved.

In his lecture, White focused on veteran education, employment, and post-traumatic stress disorder.

“Adjusting back into civilian life is difficult for veterans because, while in the armed forces, they always know what is going to happen next, but in college, that structure is gone,” he said.

In 2011, White came out of active duty and went to The University of North Carolina where he earned a bachelor’s degree in business administration. He encouraged veterans to take advantage of their education benefits and scholarships, and said seeking help upon returning home is nothing of which to be ashamed; many universities have programs to help them ease into college.

White spent much of the lecture interacting with the audience and taking questions.  One person asked White for advice to young leaders, to which he responded “it is important to stay humble and take advice from leaders.”

Master Sgt. David Dzwik, a senior military instructor at UA, hosted Friday’s event. He was on the other end of the radio when White and his team members were attacked in Afghanistan.

Dzwik said one of the greatest moments of his life was when he heard White’s voice come across the radio during the attack, which was very long and part of a mission that continued for another 20 hours. Because of prior experience together in combat, Dzwik was “never surprised in [White’s] actions” of that day.

Dzwik put together Friday’s event because he “wanted to give back to the college that’s been so generous” to him. White, who quickly accepted the offer to speak at UA, said having the Medal of Honor is “heavy” because the recipient is expected to take time to travel and speak to different communities.

Mike Patatca, a cadet in the National Guard and a fifth-year student at UA, attended White’s lecture.

“It’s really a high honor for him to be here for us,” Patatca said. “[White] realized all the great opportunities he has as a veteran.”

Patatca also mentioned how college can help veterans into the workforce and make it easier to adjust.

Rainey said it can be easy to get off track if one doesn’t have a set plan for continuing education, and that White’s advice on taking advantage of veterans’ free education was wise.