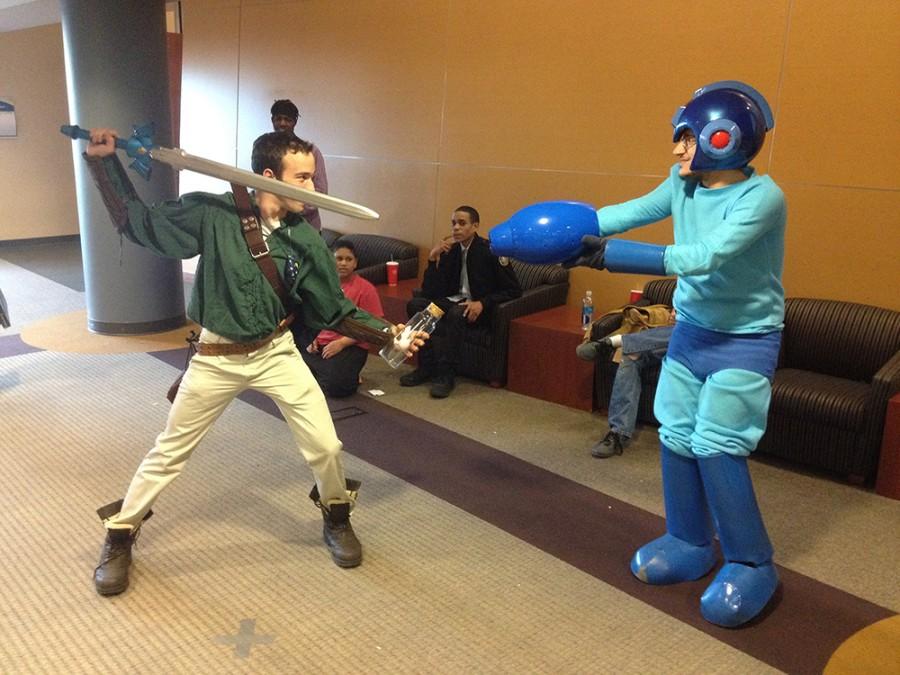 Attendees cosplay as Link (left) and Mega Man (right) in the Student Union.

More than 1,800 people filled the The University of Akron’s Student Union on Feb. 20 to attend Zipcon, a convention on Japanese animation, otherwise known as anime. The event, organized by UA’s Akron Animation Association, was free to attend.

Anime is a hand-drawn or animated medium present in comics, television shows, movies, video games, and more. Conventions, or “cons,” are events where fans of anime can celebrate the culture that surrounds the artistic style.

The Akron Animation Association orchestrated Zipcon to create an event that showcased anime and Japanese culture to the local fan base and community. The fan base was large and varied; many participants were middle or high schoolers, some with chaperones.

“Animecons,” as they’re called, present a staggering amount of activities and events. Guests at Zipcon could attend panel discussions of favorite shows, compete in trading card game and video game tournaments, play board games in the lounge, and cosplay.

Cosplay, both a verb and noun, is a portmanteau of costume and play. Cosplayers dress up as characters from anime, video games, movies, and more. The range is wide: everything from Frozen’s Elsa and a Green Power Ranger, to Deadpool and The Terminator. However, the vast majority of costumed attendees were characters from currently popular anime productions.

Middle-schoolers Alexis and Mara portrayed genderbent (reversing character gender) Ciel Phantomhive from the Black Butler series with partially homemade costumes. The girls traveled 45 minutes to cosplay for the first time at Zipcon and plan on doing it again next year.

Many cosplayers were there to socialize and network, while others entered “The Masquerade,” a cosplay competition that judged costume craftsmanship and character portrayal.

The presence of Amber Lee Connors and Daman Mills, voice-actors in television shows, video games, and animated movies, was a highlight of the show. A swarm of fans lined up to meet and get autographs from Connors and Mills.

This was Connors’ second time at ZipCon and Mills’ first.

Others were attracted by the merchandise.

“You know that’s what I’m here for!” said Stephen Abbuhl, wearing a handmade Shovel Knight costume. He was referring to the dealer’s room, where local artists and artisans displayed their wares.

Some booths featured figurines and posters and Japanese kimonos. Akron artist Mori Clark was on-site to sell her screen-printed t-shirts.

UA’s Video Game Club also organized a video game tournament with games such as Call of Duty and Super Smash Bros. Aside from competing on modern platforms, players could indulge in 8-bit bliss on an original Nintendo Entertainment System.

Starbucks, Chick-fil-A, Panda Express, the Union Market and Freshens were all open to caffeinate and hydrate guests.

Other sites included panels, discussions, and suitably strange events. Topics included costume-making and buying advice, an intro to Japanese language, and the History of the Geisha.

Zipcon was also a battleground for a sanctioned Pokémon trading card game event. Players could free play with others or enter a tournament to compete for national points. Thirteen players entered the tournament in total.

Midway through the day, the registration line began spilling out the lobby and onto Carroll Street.

UA alumna Holly Schenz explained that a lot of hard work has gone into Zipcon, now in its third year.

Many guests heard about the con via social networking, word of mouth, or simply searching the web for Ohio anime conventions.

Kimberly Roby, anthropology major and Akron Animation Association president, said the growth of popularity of anime in the 1990s can be attributed to the internet, Cartoon Network’s Toonami program, and products targeted at children such as Pokémon and Yu-Gi-Oh!

Roby explained how the internet spread awareness and allowed the creation of fan communities.

UA alumnus Cameron Carlson described Cartoon Network’s Toonami as a “gateway drug” to Japanese animation. Broadcast late at night, it gave American viewers a taste of popular mainstream anime. Products like Yu-Gi-Oh! and Pokémon, targeted at children, cultivated a future interest in the audience as they aged.

The Akron Animation Association hosted the con to showcase the fun of anime and to provide an outlet for the niche culture. Roby said the club is all-inclusion and LGBT friendly.

The Akron Animation Association meets at 5 p.m. on Friday evenings in Leigh Hall room 311 to watch and discuss anime.

“We’re grateful for everyone that attended, and those who staffed and volunteered to help, and ZPN for collaborating with us to show Pacific Rim,” Roby said. “The University staff and UAPD were extremely helpful and supportive throughout the event, and it was great to work with them and show them this fun and quirky side of the student body.”