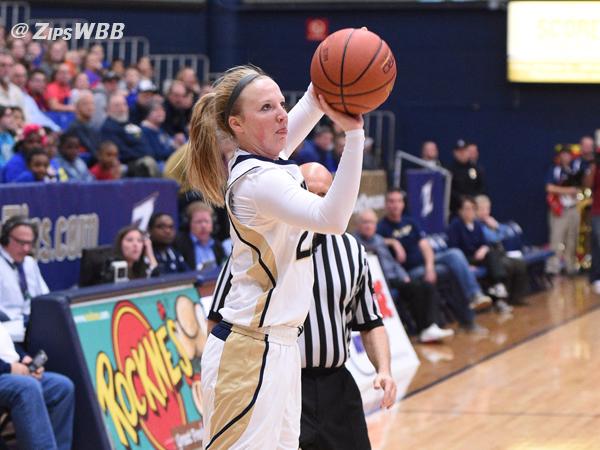 Hannah Plybon led the Zips with 17 points and six rebounds against the Golden Flashes.

The University of Akron women’s basketball team beat the Kent State Golden Flashes for the second time this season, 70-60, in Kent on Saturday. The Zips improved to 15-12 on the season while Kent State fell to 5-21. In the Mid-American Conference, Akron is now 9-7 and the Golden Flashes are 2-14.

The Golden Flashes were led by Larissa Lurken and forward Jordan Korinek. Lurken had 19 points and made all six of her free throws. Korinek scored 18 points to go with a game-high eight rebounds. Also, Niddiyah Cross scored eight points, Tyra James added six, and Paige Salisbury finished with five points.

The Zips got off to a hot start, taking a 7-2 lead three minutes into the game, led by five Plybon points. Akron would extend their lead by going on a 9-0 run later in the quarter. Alex Ricketts and Gibson made 3-pointers during the run to extend the lead to 21-7. The Zips led 23-12 after one quarter.

Akron also had a strong second quarter, outscoring the Golden Flashes 17-13. Megan Sefcik and Plybon each made 3-pointer in the last 2:26 as Akron took a 40-25 lead into halftime.

Kent State would not give up, however, as they scored 19 points in the third quarter compared to just nine for the Zips. In fact, the Flashes scored the first nine points of the half, finished off by a Salisbury 3-point jumper. The Zips’ lead was cut to six halfway through the third quarter.

The Zips would continue to fight, as they received four straight baskets from Burry. Brown finished the quarter with a free throw, and the Akron lead was just 49-44 going into the final frame.

A strong start to the fourth quarter would put Kent State away for good. On the first possession, Burry found Gibson outside the arc and Gibson converted to push the lead to eight. Brown would then score on back-to-back possessions. The Zips continued the run by a pair of Brown layups and another Plybon 3-pointer. Halfway through the quarter, the Zips’ lead was 63-50. The Akron lead would get as far as 14, and the Zips finished off the Golden Flashes to earn the victory.

Akron did an excellent job from beyond the arc, making nine of 22 3-pointers. They struggled mightily from the foul line, however, going just 7-14. The Zips outrebounded Kent State 35-28 and turned it over 19 times compared to 24 times for the Golden Flashes.

The Zips will end the regular season this week. First, they will host the Buffalo Bulls on Wednesday at 8 p.m. Akron beat Buffalo 69-61 on January 16th in Buffalo. Next, Akron will finish up the season on Saturday with a rematch with Bowling Green on Saturday at 2 p.m. Again, the Zips already beat the Falcons on January 13th by a 71-55 score.