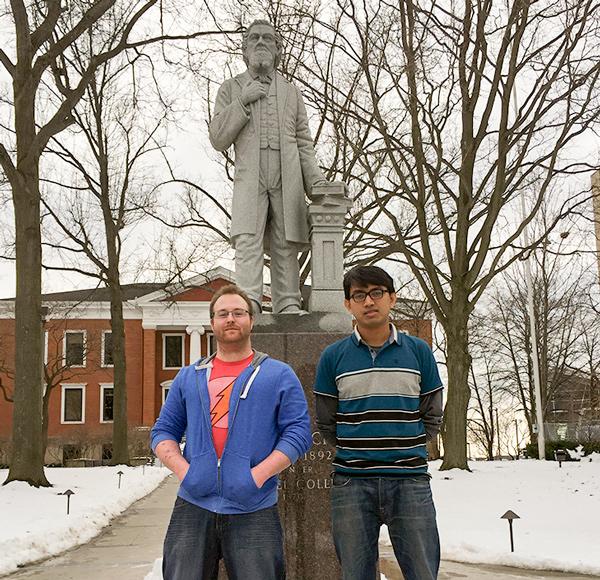 Photo courtesy of The University of Akron

A University of Akron student-led team recently proposed a uniform testing method for spacesuits, which NASA selected as one of the nation’s three finest.

The proposal was created in response to NASA’s Textile Test Methods Challenge, a call for researchers to create a standard procedure that predicts the damage a spacesuit will suffer in various extraterrestrial environments.

Spacesuit wear is a major issue in space travel. It is an astronaut’s primary protection from the vacuum of space, and damage to the suit could prove fatal. Past spacesuits have been susceptible to wear, such as Apollo astronaut Harrison Schmitt’s, which wore out and tore around the foot. But with a manned mission to Mars expected by 2030, NASA is increasing emphasis on spacesuit testing measures.

Advisor Daniels said he viewed the challenge as an opportunity for team members to gain valuable real-world experience.

“I encouraged the students. I let them know that, win-or-lose, this would be a great opportunity that they could discuss with future potential employers,” Daniels said. “I warned them at our first meeting that there would be problems regarding team members having competing ideas. I asked them to look for the friction, recognize it, and work through it.”

It turned out that the largest problem was the team members’ lack of knowledge about spacesuits.

“The first challenge was [none] of us in the group had any idea about this extraterrestrial problem,” said team member Barua. “So [the first] couple of weeks were dedicated only for literature review of old work regarding this issue.”

Once the team better understood the challenges associated with spacesuit damage, they began a series of brainstorming sessions, where they envisioned their testing method. Because of their varying majors, which encompass several disciplines of engineering, each team member was able to bring a unique perspective to the task. By the end of Christmas week, they had finished their first draft. With the help of their advisors, the team completed their final draft before the deadline.

That final draft details the team’s spacesuit testing method, which, according to Barua, involves rotating abrasive cylinders against the suit in the presence of lunar dust. This process damages the fabric of the spacesuit, causing some of it to fall into a collection box.

“This type of damage will increase particle migration through the suit which will expose the astronaut [to] elements like lunar dust [and] martian soil, which will affect the essential mechanism of [the] suit,” Barua said.

After the tests, a post-evaluation will occur to determine the extent of the wear on the suit.

Daniels expressed great satisfaction in the results of the challenge, and reported that NASA is equally impressed. In addition to naming the team’s proposal among the nation’s top three, Daniels said Houston-based NASA officials “stated that they were impressed and were interested in working together in the future.”