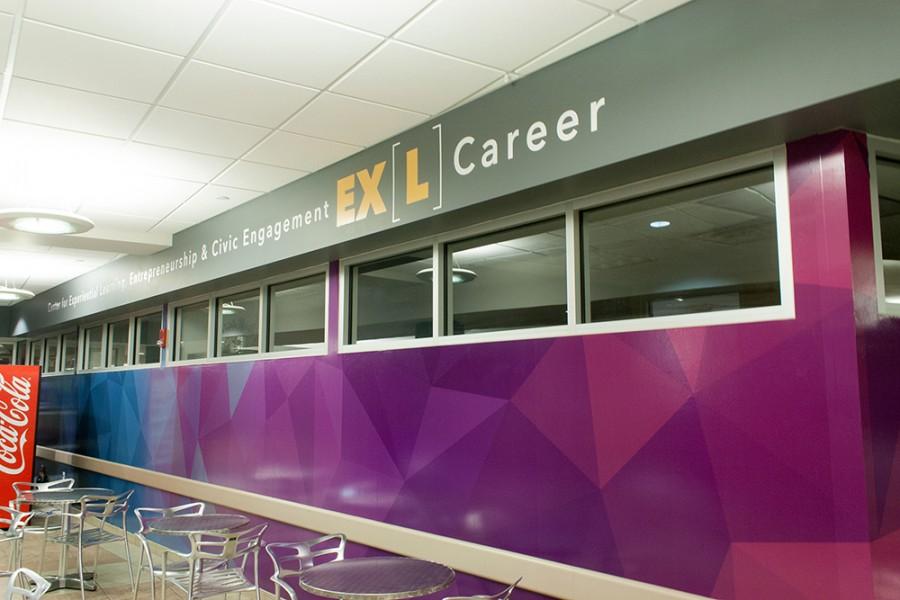 Career/EXL in the Student Union, along with Create/EXL in Bierce Library, start operations later this week, after more than nine months of preparation and construction.

The EXL Center, a new initiative at The University of Akron led by Priceline.com co-founder Jeff Hoffman, will launch this week with a series of events from Wednesday through Friday.

“We’ve been building to this for nine months,” said Ian Schwarber, EXL’s resource director, “and this is the only launch week we’re ever going to have. We’re hoping to make the biggest splash possible.”

The Center was formed to provide students with experiential, entrepreneurial, and civic learning. This week’s events start off with a 9 a.m. introductory forum on Wednesday, and end with a closing reception event at 5 p.m. on Friday.

All events are free, open to the public and, unless otherwise noted on the schedule of events, held at the Create/EXL room in Bierce Library next to the main floor circulation desk.

Launch Week participants will receive a ticket at each event they attend, which will put them in a drawing for prizes at Friday’s closing reception. Those with three or more tickets are entered to win smaller prizes such as backup phone chargers and 16-gigabyte flash drives. Those with five or more tickets will be entered to win an iPad, a Fitbit wristband, or a Microsoft Surface tablet.

The EXL Center is actually two “centers,” one on the main floor of Bierce Library called “Create/EXL,” and one on the second floor of the Student Union called “Career/EXL.”

Create/EXL in the library will focus on connecting students with proper resources on campus or in the community to fulfill their ideas. Schwarber gave the example of students who, say, are doing a group project, and come to Create/EXL to find out how to make it better. After meeting with different people, the students could practice their presentations in the center, then use film equipment to break it up and put it online, after which they could put the film into an online portfolio the center would help them create.

Career/EXL in the Union will focus on performing the more traditional duties of what was formerly the Career Center, and is now Career Services (Career Services will still exist, but will become a division of the EXL Center): helping students find jobs, getting them in touch with employers, and advising on career-related matters. Career/EXL will also have a “multi-mentoring” lab, which will link students with mentors in the community or on campus to help them with new ventures or projects in which they are interested, even for class credit.

Schwarber says nothing like the EXL Center has ever existed at UA.

“There was never one single platform that was built to say, ‘come in with your ideas and we’ll find a way to match that with the resources to make it a reality,” Schwarber, a UA alum, said. “There was never that concerted effort, those dedicated resources, and the talented people engaged solely to do that stuff and make that their purpose.”

If a student cannot make it to the events of launch week, Schwarber said he or she should go to EXL’s website – uakron.edu/exl – and sign up for the email list.