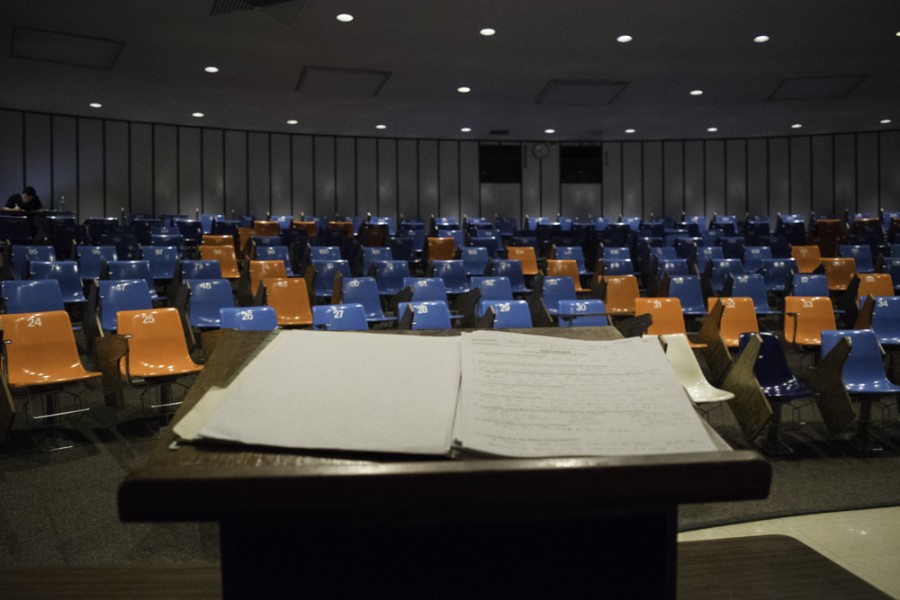 As the faculty union goes into emergency meetings today and tomorrow to discuss a strike-authorization vote, a group of distinguished UA professors has publicly declared their disapproval of the University’s direction under the leadership of President Scott Scarborough.

The title of “Distinguished Professor” is the top honor the UA Board of Trustees can give to a faculty member. Since 1980, UA has given the distinction to only 27 professors, 15 of whom signed a letter published in the Akron Beacon Journal on Sunday, Feb. 28, which says among other things faculty voices have been ignored, shared governance is non-existent, and “the university has lost track of its core mission: the excellent education of our students.”

“President Scarborough was brought in promising to increase enrollments, increase revenues and improve the national profile of the University of Akron,” the letter states. “All of his actions have had exactly the opposite effect…The [administration’s plan] seems perversely designed to lose the best students and faculty and waste valuable resources. This must be stopped immediately, before irreparable damage is done.”

UA history professor Constance Bouchard was the letter’s chief drafter; she and her colleagues started it a month ago, but decided instead to try to meet with Board members first. After a month of no response, they sent the letter last week for the Board to consider at its Thursday committee meeting. They have not received a response from the Board yet.

In an email, University spokesman Wayne Hill said, “The letter was received at the [Board] office on Feb. 24th and was forwarded to all members of the Board that same day. Matters that may or may not have been discussed during executive sessions of the [Board] are confidential…”

This letter closely follows the Faculty Senate’s 50-2 no-confidence vote in Scarborough, a letter from UA academic chairs and directors demanding change in University leadership, and community ad campaigns calling for the same.

Along with meeting the president of the UA Faculty Senate, Hill said Board Chair Jonathan Pavloff will “continue to have conversations with faculty members and [others] within the University and throughout [Greater Akron].”

Days before this letter, the Akron chapter of the American Association of University Professors (AAUP) announced its emergency meetings to discuss the status of contract negotiations with the UA administration and a strike-authorization vote.

“We’ve made good progress on a lot of issues,” said John Zipp, president of the Akron-AAUP, “but where we seem to have a pretty wide disparity is on compensation and benefits.”

The strike-authorization vote does not mean faculty will strike; it only means union membership has granted the Akron-AAUP executive committee the authority to call a strike if necessary. In the meantime, there is a process to reconcile disagreements between the administration and union faculty.

By March 3, both the Akron-AAUP and the UA administration must submit briefs for the consideration of the fact-finder, a neutral third-party. By March 29, the fact-finder will issue a report, and if neither side rejects the report within 14 days, the new contract is created.

If either side rejects the report, there could be a strike.

“You don’t do that unless everything else has failed,” Zipp said. “We wouldn’t be calling for a strike unless there was no other option.”

In response, UA spokesman Wayne Hill said “Negotiating sessions continue to be held with the AAUP chapter but we believe it best not to make any public comment about the status of those discussion.”

Zipp says students would be wrong to think faculty negotiations have nothing to do with them.