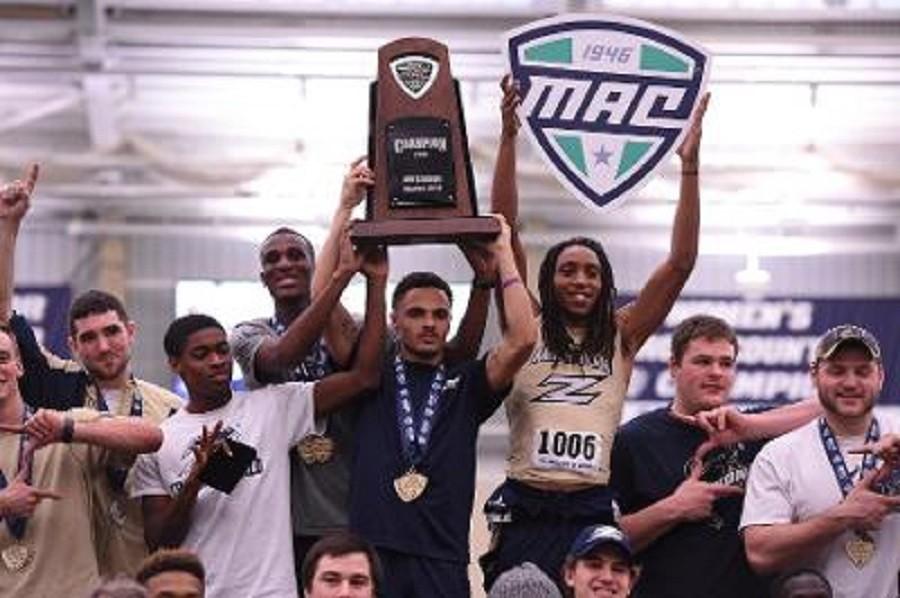 Some of the members of the men's track team celebrate the third straight MAC title.

The University of Akron men’s track and field team secured it third straight Mid-American Conference Championship this past weekend at the Stile Athletics Field House. The Zips bested runner up Eastern Michigan by 10.5 points to win the title three times in a row for the first time in program history.

The women’s team fought hard all weekend and fell one point short of eventual champion Eastern Michigan. The one point marks the closest defeat in conference championship history.

Clayton Murphy was named the MAC’s Most Outstanding Track Performer for the second consecutive year. Murphy won in the 800 meters and mile run individually and was also the anchor man of the winning 4 x 400 meter and distance medley relay teams. His time of 1:48.65 in the 800 meter race broke the championship record.

The title came down to the final two events the 4 x 400 relay and the high jump. Brent Gray, Miles Baldwin, Taron Slone, and Murphy not only won the race but set a new record for the school, championship, and Stile Athletics Field House to give Akron the lead.

Cody Stine finished second (6 feet, 11.5 inches) and Curtis Richardson third (6 feet, 9.5 inches) in the high jump to clinch the championship for Akron. Stine’s height was the same as eventually winner Roosevelt Dotson from Kent State, but was given second based on number of jumps.

Akron’s head coach Dennis Mitchell was named as the conference Coach of the Year for the third straight year and fifth time overall.

On the women’s side, Jackie Siefring was named as the Most Outstanding Field Performer as she set a school and Stile Athletics Field House record in the pentathlon with a cumulative score of 4,215.

Siefring combined with Samia Bell, Daziah Green, and Michalla Gordon in winning the 4 x 400 meter relay in a school–record time of 3:42.79.

Alexis Cooks completed a successful weekend by winning the weight throw on Friday with a toss of 66 feet, 3 inches. The next day she captured her second title in the shot put with a distance of 56 feet.

Caroline Hasse and Becky Szabo each cleared 13 feet, 7.25 inches in the pole vault but Hasse was given the title based on the number of jumps.

In the women’s triple jump, Arianda Ramos Gandia secured her win with the second best jump in the history of the program at 42 feet, 3.25 inches.

Next up for the Zips who had qualifying marks are the NCAA Track and Field Championships held in Birmingham, Ala on March 11-12.