UA must refund $4.1 million to students 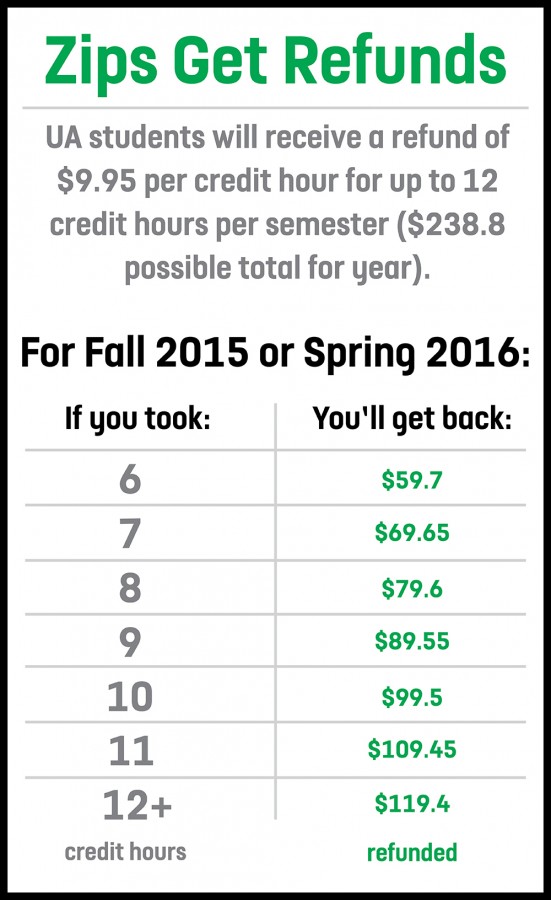 The University of Akron will return $4.1 million to its students after the Ohio Department of Education discovered UA’s facilities fee was improperly raised during the summer.

In its 2015 – 2016 budget, UA raised students’ facilities fee from $18.55 per credit hour (up to 12 credit hours) to $28.50 per credit hour as a way of resolving its “$60 million fiscal challenge,” a press release sent to students Wednesday morning said. The budget’s $10 million in proposed fee increases included the facilities fee, which main campus students pay toward debt charges on bonds issued for the Student Union, Recreational Center, Stile Athletics Field House, and InfoCision Stadium.

The Ohio legislature enacted a freeze on public university tuition and general fees last year shortly after UA passed its budget. In a recent annual review of university budgets, state officials determined that UA’s facilities fee was a “general fee.”

All affected students will receive their refund before the end of the spring semester, whose amounts will depend on the number of credit hours a student took in the spring and fall semesters, as well as whether their financial awards covered the fee already.

Those eligible will receive a refund of $9.95 per credit hour. As the fees only apply to a maximum of 12 credit hours per semester, any student could receive up to $238.80.

UA spokesman Wayne Hill said the refund may appear as a credit on a student’s account or through monetary recompense at the end of the semester.

A similar situation occurred during summer 2015, when the University tried to charge a $50-per-credit-hour fee on higher level courses during the same public university tuition freeze active now.

UA was forced to rescind the fee after backlash from students and state leaders.