Zips use strong second half to beat Buffalo, 62-49 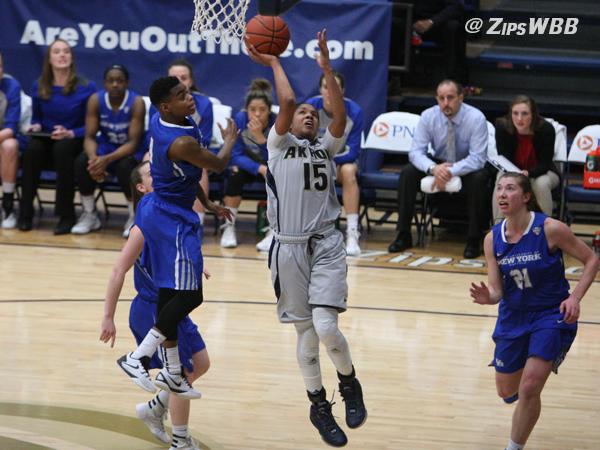 Anita Brown led the Zips to victory on Wednesday night with 11 rebounds and four assists.

Akron outscored the Bulls 38-20 in the second half to fuel the victory. Hannah Plybon led the way with 21 points, five rebounds, and three steals. Leading scorer Anita Brown came through with a double-double, registering 20 points and 11 rebounds. Brown also made eight out of her ten free throw attempts.

Additionally, forwards Greta Burry and Diandra Gibson scored nine points each. Burry also finished with five rebounds and one steal. Gibson pulled in six rebounds and went 2-3 from beyond the arc. The Zips only received three points from their bench, a 3-pointer from Ali Ball.

The first quarter was very competitive, with neither team taking control. Akron looked like they would go into the second quarter with a lead after a Brown layup gave them a 3-point lead with just 57 seconds left. However, Oursler made a jumper, and Moss recorded a steal and made a buzzer-beating layup to give Buffalo a 16-15 lead after one quarter.

The Bulls outscored the home team 13-9 in the second quarter. This came after Buffalo once again made the final two baskets of the quarter, off layups from Oursler and Joanna Smith. The Zips were trailing 29-24 going into halftime.

The Zips would start off the second half on a 10-4 run, started by two Plybon 3-pointers, each of which were assisted by Gibson. A Burry layup gave the Zips a 34-33 lead. After Mariah Suchan ended the Zips run, Akron scored the next six points, highlighted by a Ball trey. Buffalo would fight back, but a Plybon basket gave the Zips a 46-42 lead going into the final frame.

Anita Brown had eight points in the final frame to lead the Zips to a 16-7 final frame. Six of her points in the quarter came off free throws, her last two being icing on the cake with 1:32 to play.

The Zips defense brought their game Wednesday, limiting Buffalo to just 29.2 percent shooting from the field. Also, the Bulls made just five out of 26 3-point field goals in the game. Akron, on the other hand, made 40 percent of the shots.

In the ball control statistics, both teams were very close. Akron outrebounded Buffalo 43-41, had three more assists than the Bulls, and turned it over just two more times. Finally, Buffalo’s bench outscored the Zips’ 9-3.

Akron will finish the regular season on Saturday afternoon at home against the Bowling Green Falcons. Game time is scheduled for 2 p.m. The MAC Tournament will begin on Monday, and it’s possible that the Zips will remain home for a first round game on Monday, before going to Cleveland for the second round on Wednesday.