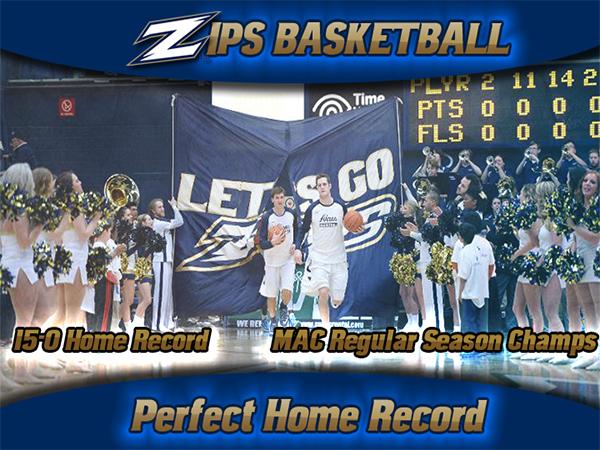 The Zips ended their regular season with a perfect 15-0 home record on Friday night.

The Zips, who shot just 21.2 percent from beyond the arc, improved to 24-7 on the season. Kent State fell to 19-12, and with the loss falls to the number five seed in the Mid-American Conference. That means that Kent State will host Bowling Green on Monday, while Akron and three more teams will have a first round bye.

Despite the poor shooting, the Zips showed a balanced attack on Friday. Isaiah Johnson led the way with a double-double, scoring 12 points and hauling in 11 rebounds. Johnson also blocked two shots and recorded one steal.

Houston native Antino Jackson and sophomore Jimond Ivey kept up the balanced scoring, with each player scoring nine points. It was the most Ivey has scored in a game since November 16 against Hiram. Jackson also had little success from beyond the arc. Entering the game shooting 34.5 percent from the 3-point line, Jackson went just 1-6 on Friday.

Kwan Cheatham Jr. fought through foul trouble for much of the game, but still finished with seven points and four rebounds in just 20 minutes. Cheatham Jr. made one of three 3-pointers.

Finally, it was an unusual senior night for two players that have provided so much to the team for the past four seasons. Forward Jake Kretzer got the start in his final home game, and finished with seven points and ten rebounds, the most rebounds he has had since January 2, 2013. The sharpshooter went just 1-5 from the 3-point line, but made all four free throw attempts.

It was a night to forget for the MAC’s leader in 3-point field goals made, Reggie McAdams. McAdams missed all 11 shots he took, including eight 3-pointers. The senior did contribute, however, making all five of his free throws and recording two steals.

Kent State was led by Jimmy Hall, who scored 20 points and had a whopping 17 rebounds, including seven offensive rebounds. Also, Chris Ortiz finished with 12 points and eight rebounds and Kellon Thomas added 11 points.

The Zips started the game nicely, feeding off an electric crowd at Rhodes Arena. 5,301 fans in attendance roared when Antino Jackson started the scoring with a 3-pointer just 15 seconds into the game. Jackson scored again on a jumper after a Cheatham Jr. post layup, and Kent State’s Hall missed his first three shots. Akron led 7-0, and kept the lead for nearly the whole game.

Kent State didn’t go away though. The Golden Flashes would make it a one point game five separate times in the first half alone. The last time came when Chris Ortiz made a 3-pointer to cut the lead to 27-26, with just 2:23 remaining in the half.

McAdams was fouled on the Zips first possession of the half on a 3-point try. He made all three free throws to extend the lead to six.

But that is when Kent finally came back to take the lead. The Flashes scored on four straight possessions while Johnson scored for the Zips, and Kent led 39-38. The Zips Aaron Jackson scored just 14 seconds later, and that was the only time the Golden Flashes had a lead in this game.

The Zips got the lead up to seven again with an Ivey layup. After Kent scored the next five points, Cheatham Jr. made a 3-pointer that nearly blew the roof off Rhodes Arena.

Later in the half, the Zips went on an 7-0 run that would stick the dagger into Kent State. It all started with a Hall technical foul, which came after he made a layup. Kretzer made both free throws from the technical, and Robotham stuck the dagger in with a layup, then a 3-pointer to give Akron a 63-51 lead with 6:33 remaining.

Kent State never came back to make the game close, as a Jackson layup with 55 seconds left iced the game for Akron.

Neither team shot well in the game, as Kent shot just 36 percent from the floor and Akron made just over 37 percent of their shots. While the Zips didn’t shoot well from the outside, Kent wasn’t much better, making just six out of their 18 3-pointers. Finally, Kent was just 10-17 from the foul line, while the Zips went 15-19.

A big factor in the game was ball control. Akron forced Kent State into 15 turnovers while the Zips only had seven giveaways. Additionally, the Akron bench outscored Kent’s 34-15.

The Zips will take a break before they head to Cleveland on Thursday. Akron will play the winner of the Eastern Michigan and Toledo matchup. The game will be played on Thursday at noon. The Zips played each team this season, beating Eastern Michigan 92-88 at home and losing to Toledo 78-64 in Toledo.