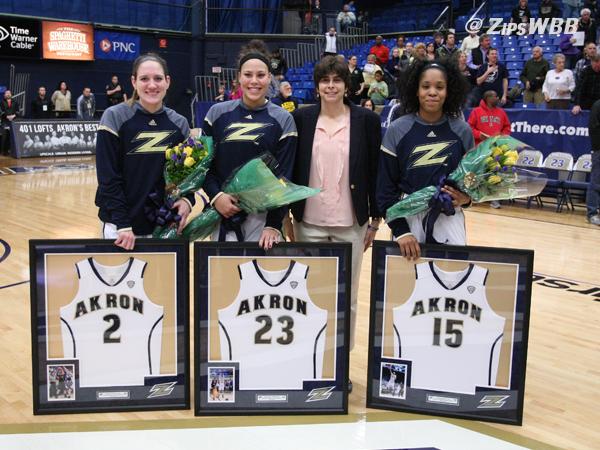 The University of Akron women’s basketball team finished the regular season on a high note, beating the Bowling Green Falcons, 71-61, on Saturday at Rhodes Arena. The Zips finished the season with a record of 17-12 while Bowling Green sits at 10-17.

It was the final home game for Zips’ seniors DiAndra Gibson, Megan Barilla, and leading-scorer Anita Brown. Each player was honored before the game started. Each player also played good games to end their regular season career.

Plybon started the game with a 3-pointer, and the rest of the quarter was very close. Neither team led by more than three until a Gibson layup gave Akron a 20-16 lead with 21 seconds left in the quarter.

The Falcons got back to within one point with 8:05 left in the second quarter, and that’s when the Zips pulled away. The Zips went on a 14-5 run, fueled by ten points from Brown. Akron would finish the quarter with another Plybon 3-pointer, and they went into halftime with a 39-30 lead.

Akron continued to fend off the Falcons in the third quarter, but Bowling Green never got back to within four points. The closest they got was five, and the Zips received layups from Piper and Barilla to push the lead back to nine. The Zips took a 56-46 lead into the final frame.

The Zips smashed any hope of a Falcons comeback early in the fourth quarter with a 10-3 run. Brown had four points during the run before Plybon finished it with a 3-pointer. Akron extended their lead to 68-50 with just 4:14 remaining. Bowling Green would cut the lead to ten, but there was only 19 seconds left, and Akron ran out the clock for the win.

The Zips shot an excellent 46.6 percent from the floor in the game, and made ten out of 15 free throws. Akron was outrebounded 38-31, but turned it over only five times in the game compared to ten for the Falcons. Lastly, Bowling Green’s bench outscored the Zips’ 26-12.

With the season finished, the MAC Tournament matchups have now been finalized. Akron received the number five seed, and they will host 12th seed Miami on Monday at 7 p.m. If they win, they will move on to the second round and play on Wednesday in Cleveland.