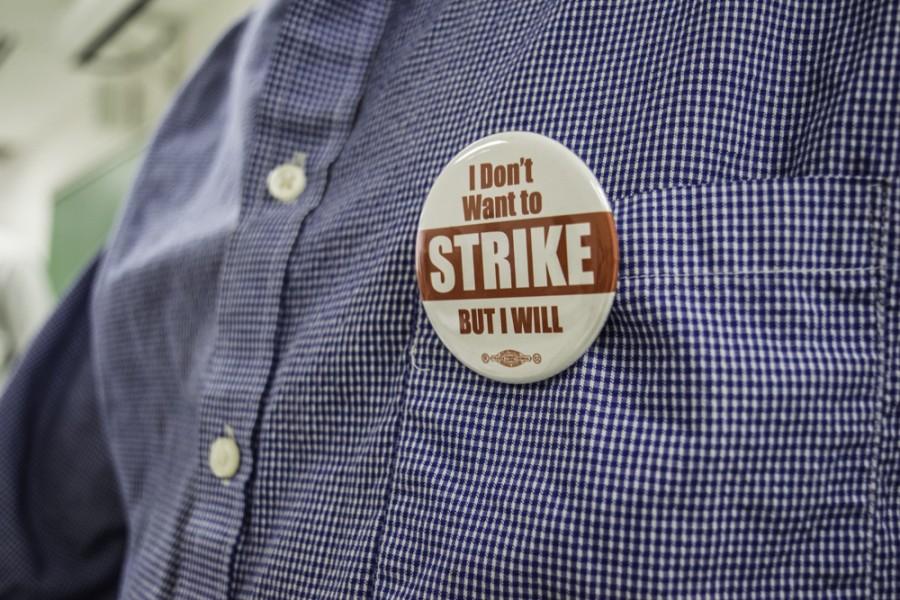 In the print version of this article, The Buchtelite did not clarify the conditions for the administration’s faculty salary proposal. The proposal includes a 0.75 percent increase for the next two academic years only if UA’s revenues improve by at least 1.5 percent, but does not include a raise for last year or the current year.

“I don’t want to strike, but I will” read the buttons worn by faculty members of the Akron American Association of University Professors (AAUP), which is currently in contract negotiations with the UA administration.

Following recent emergency meetings, the faculty union will have a strike authorization vote electronically this week – which upon passing gives the Akron-AAUP’s executive committee the authority to call a strike. The results will be formally published on March 14.

The Akron-AAUP is considering a strike if contract negotiations between the administration and the faculty union fall through. According to John Zipp, president of the Akron-AAUP, compensation and benefits are the source of disagreement between the two parties.

In terms of compensation, the faculty wants salary increases ranging from 1-2 percent to “keep up with the cost of living and to reward excellent teachers and researchers,” according to distinguished history professor and union member Constance Bouchard.

The faculty proposal also includes “a reduction of up to 50% of our proposed increases in the event of significant and verifiable reductions in future [University] revenues,” according to Akron-AAUP’s website.

The administration’s proposal includes a salary increase of 0.75 percent for the next two academic years, however, these raises can only occur if University revenues improve by 1.5 percent. The proposal did not include a raise for last year or the current academic year.

In an email sent to faculty, the Akron-AAUP Communications Committee said that under the current proposal, it is possible that “there will be no salary increases at all for the next several years.”

An article on the Akron-AAUP website shows that spending on instructional salaries has been stagnant since 2002, while tuition per student has doubled and coaches’ salaries have increased.

Healthcare is another topic under contention. While the Akron-AAUP has proposed no change to employee contributions for health care costs, the administration’s proposal includes increases in contributions and a reduction in cover, shifting an estimated $2 million cost from the University’s responsibility to the employees.

During the negotiations, a neutral third party fact-finder will mediate the demands of both sides.

Both the Akron-AAUP and the administration must present evidence and briefs to the fact-finder on March 3, including witness testimonies. By March 29, the fact-finder will produce a report and each side has 14 days to reject the proposal. If neither side rejects, then a new contract is created.

If either the faculty union or the administration reject the report, a strike is likely, according to the Akron-AAUP’s website.

If the strike-authorization vote passes, Akron-AAUP must give a 10 day notice prior to a strike, during which protesting faculty would not hold classes or have any communication with students. In addition, they would not be paid or receive benefits.

At other universities, faculty strikes are usually short-lived, although some have persisted longer. For instance, the Eastern Michigan University Chapter of AAUP went on strike from midnight until 7:30 a.m. the same morning when issues were resolved, while Northeastern Illinois University’s strike lasted 20 days.

Nearby Kent State University’s AAUP chapter passed a strike-authorization vote in November 2015 by a 90 percent majority, according to a Cleveland Plain Dealer article. This January, a fact-finder resolved contract negotiations wherein the faculty received a 2-percent raise for 3 years.

Without the leverage that a passing strike-authorization vote will provide, the “faculty will almost certainly end up with an unreasonable contract” says an article on the Akron-AAUP website.

“The real stakes are the education of our students,” Bouchard said. “For several years the administration has been diverting revenues away from our core mission, education… If working conditions continue to deteriorate, it will be harder and harder to keep or replace good faculty, which will really hurt the students.”