Zips women hang on to beat Toledo in overtime 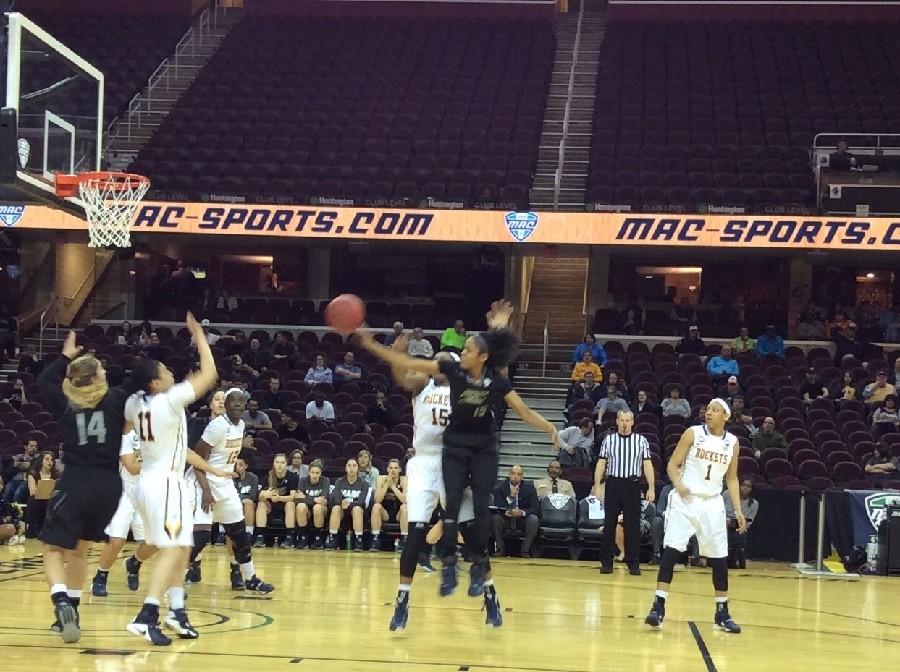 Anita Brown dropped a career-high 37 points and grabbed seven rebounds to lead The University of Akron women’s basketball team to a 73-71 overtime win over the Toledo Rockets in the quarterfinals of the Mid-American Conference Tournament at Quicken Loans Arena in Cleveland, Ohio.

The fifth-seeded Zips also got help from DiAndra Gibson’s 10 points and Megan Barilla’s 10 rebounds and six assists in defeating the fifth-seeded Rockets.

Akron will now face the Buffalo Bulls who, as the eighth seed, upset top-seeded Ohio University in the first game of the afternoon.

The first quarter was mainly a back-and-forth affair with Toledo leading until Megan Sefcik hit back-to-back triples to give the Zips a 13-12 lead with just under five minutes to play. Brown added another 3-pointer to extend the lead to four at the first media timeout with nearly four minutes left in the quarter.

After the timeout, Brown converted a layup to give the Zips an 18-12 lead. The Zips hit seven of their first 12 shots.

The first quarter ended with the Zips able to maintain their advantage at 22-17; defensively they forced five Rocket turnovers and turned them into seven points. Akron also committed five turnovers, but Toledo wasn’t able to take advantage, only scoring two points off those miscues.

Brown had 11 of Akron’s points in the first quarter. Sefcik and Gibson added six and five respectively. Akron was able to hit four of six from deep to start the game.

Hannah Plybon broke into the scoring column by hitting a trey to start the Zips’ scoring in the second quarter, but then Akron hit a cold spell and did not score for almost three minutes before Brown hit a field goal.

During that drought, Toledo closed the game to one at 25-24 after scoring seven consecutive points.

Akron led at the intermission 40-36. Brown added 10 more points in the second stanza to give her 21 at the break.

Both teams missed scoring opportunities to start the second half, but a spinning drive by Plybon and a dish to Brown for another layup gave the Zips a 42-36 lead.Toledo coach Tricia Cullow called a 30-second timeout with seven-and-a-half minutes left in the quarter.

The game became slowed down in the third quarter but the Zips pushed the lead to 12 after a Barilla reverse layup at 50-38 with three minutes remaining in the third.

The Akron offense sputtered the rest of the quarter and the Rocket offense woke up and finished the quarter on a 6-0 run to close the gap to 50-44.

“We were getting stops, but we could not score,” Akron head coach Jodi Kest said.

Toledo continued their run to start the final quarter. Jay-Ann Bravo-Harriott converted on a three-point play and Ana Capotosto hit a trey to knot the score at 50.

A couple of free throws gave Toledo their first lead since the first quarter at the 7:14 mark of the fourth.

Akron’s scoring drought finally ended with a Gibson layup at the 6:27 mark to even the game at 52. Brown followed shortly with a jumper to give the Zips the lead back at 54-52.

With the game deadlocked at 54, Gibson committed her fifth foul but Kaayla McIntire split the pair to give Toledo a 55-54 advantage with 3:21 remaining.

A steal by Brown and subsequent layup tied the game once again at 58 with 1:39 yet to play.

Capotosto was able to hit a pair from the charity stripe with 1:07 to give Toledo a 60-58 lead.

After missing a tough shot from inside the paint, Brown came up with another steal and dished to Greta Burry for a layup with 10.5 second left in the game to tie the game at 60.

Toledo set up a final play during a timeout, but the Zips defense forced another Rocket turnover with 2.6 seconds remaining.

On the inbounds, Brown missed a shot just inside half-court and the game headed into overtime.

Brown started with a short jumper to allow Akron to jump out to a 62-60 lead.

After a Rocket free throw, Plybon was good on a jumper to push the lead to 64-61, but Toledo answered with a Janice Monakana shot. However, Plybon responded with a deep three to give Akron a 67-63 advantage with 1:49 remaining.

Plybon had been one for nine shooting before that point. Some thought that Coach Kest said something to her before hitting the two big shots.

“I didn’t say anything,” Kest said. “I wish I could say that I said something great, but I didn’t. She is one of the best shooters in the league and always comes around.”

Branae Harris made a pair of free throws to make it 67-65, but a Burry offensive rebound and putback gave Akron a 69-65 with just 41 ticks left on the clock.

Sarah St-Fort missed a pair from the line with 30 seconds to play and Akron took advantage, finding a streaking Brown for her 35th point and a 71-65 lead.

Brown was able to split a couple from the free throw line between a couple of 3’s by Toledo and then one more from the line to close out the win.

Brown’s previous career high was 36 against the Rockets on Jan. 14, 2015. “Every time we play it’s a good matchup. I was just locked in today,” Brown said.