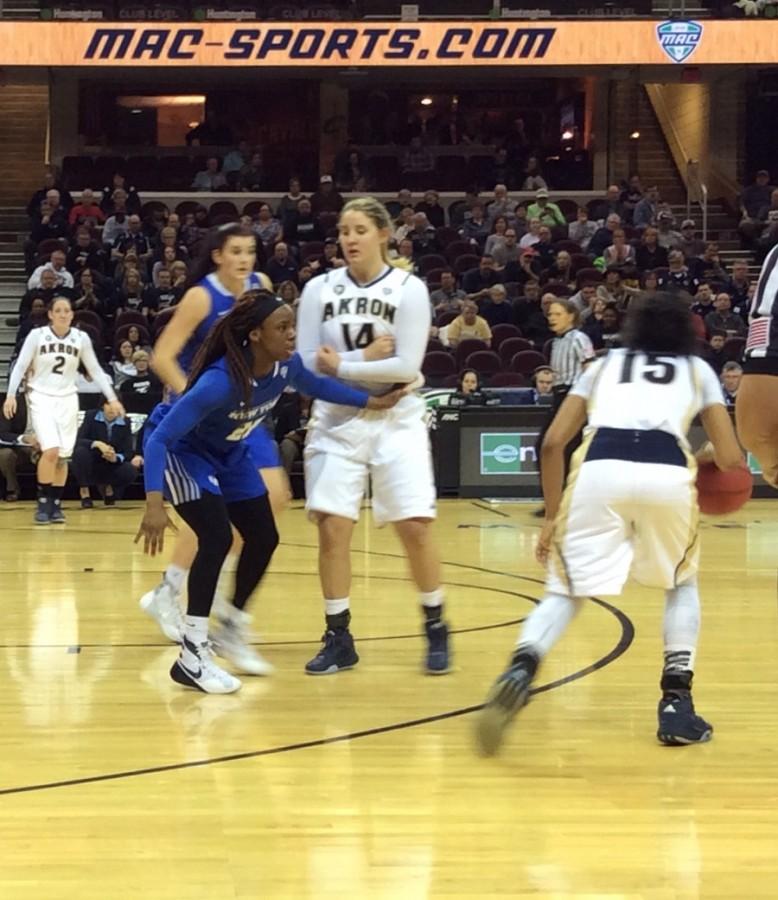 Anita Brown drives around a Greta Burry pick during the MAC Tournament game against Buffalo.

The eighth-seeded Buffalo Bulls continue to play basketball at the right time of the year as they upset the fifth-seeded University of Akron women’s baskeball team, 88-87, in semi-final action of the Mid-American Conference Tournament at Quicken Loans Arena in Cleveland.

Reserve Lilli Piper led the Zips with 24 points and nine rebounds in the game while Anita Brown and Hannah Plybon each added 22 markers but it was not enough to save the Zips.

Akron (19-13) started the game off a little slow falling behind 4-0, but a Plybon free throw and a three ball from DiAndra Gibson tied the game up at 4.

Plybon hit a triple to give the Zips their first lead at 9-8 with 4:40 left in the first quarter and after a Buffalo three point basket by Joanna Smith, added another 42 seconds to put Akron back in front 12-11.

Buffalo (19-13) led after one quarter, 22-19, but Akron was able to stay close by hitting five of their first six shots from behind the arc with Plybon leading with charge with three, Gibson and Piper each adding one.

The first four minutes of the second stanza became the Lilli Piper show as she scored eight of the first 11 points of the quarter. The outburst helped ignite a team scoring barrage as Akron went on a 16-5 run to force Buffalo head coach Felisha Legette-Jack to call a timeout with 5:22 to go before the half and the Zips leading 35-26.

Akron took opened up its largest lead at 12 twice with the last time being at 44-32 with 2:25 left on a jumper by Anita Brown. Buffalo was able to finish with a mini run by scoring the last six points of the half but the Zips retained the lead at 46-41.

Piper finished the quarter with 15 points and had 18 on 7 of 8 shooting; including a perfect 3 for 3 from behind the arc to lead the Zips, Plybon added another 10 points. Megan Barilla had five assists at the break.

The Zips as a team buried nine 3-pointers in the half and shot 60 percent (15 attempts) and had 12 assists on their 17 field goals showing that ball movement was a premium in the first half.

The second half starting off interesting with Akron still leading 49-45, Buffalo’s Stephanie Reed fouled out with still 7:06 remaining in the third quarter. After picking up a foul against the Zips’ Gibson who had just grabbed an offensive rebound, Reed said something that the referee did not like and picked up a technical foul which also becomes a personal foul which would be her fifth.

Brown hit both free throws and Piper cashed in on Akron getting possession of the ball by hitting a short jumper to give Akron a 53-45 advantage.

The Bulls went on an 11-3 run to know the score at 56 as Akron hit a cold spell in shooting. Brown converted on a layup to give the Zips the lead back at 58-56. Plybon extended the lead to five with a three pointer than showed some shooter’s touch with the rim.

The third quarter ended with Brown splitting a pair from the charity stripe giving the Zips a 62-59 lead heading into the final stanza. Brown had 9 points in the quarter for Akron.

Buffalo’s Mariah Suchan hit a pair of free throws to knot the game at 67 with 6:26 left in the game, but Akron responded with a Gibson layup to regain the advantage.

On the next possession, Buffalo’s Cassie Oursler was able to connect on an old-fashion three point play and after an Akron miss, Smith hit a three to give the Bulls a 73-69 lead with 5:16 remaining. Gabbi Bade added another jumper to make it 75-69

A Plybon triple stopped the bleeding and brought the Zips within three to 4:12 to play, but the Zips had trouble finding the basket again. Oursler hit another layup for Buffalo while turnovers and misses plagued Akron.

With 1:35 left in the game, Akron began fouling to try and gain the advantage, the Bulls hit two of four free throws, but on the last miss were able to corral the offensive board and head back to the line and led 80-72 with 1:17 left.

Piper hit a three to cut the deficit to 5 with 70 ticks left on the clock. On the ensuing foul, Bade made the first but Akron was called for traveling on the rebound to give the ball back to Buffalo again.

Brown and Plybon each hit treys sandwiched around a pair of free throws by the Bulls’ Ayoleka Sodade, to make it 84-81 with 48.1 seconds to play.

Akron made the decision to play defense rather than foul and it looked like the right decision as Smith misfired on a three, but Suchan grabbed the board and put the ball in the basket for a five point lead with just 20 seconds to go.

Brown was fouled attempting a triple with 7.6 to go and after hitting all three charity tosses to make it 86-84, Buffalo used its last time out.

On the inbounds a Plybon foul and Sodade went to the line and missed both free throws, but was able to get her own rebound and score while getting fouled again. After missing another free throw, Plybon was able to connect on one last triple to provide the final margin.

Buffalo out-rebounded Akron for the game by a 51-37 margin, including 20 offensive rebounds.

“Obviously very disappointed with the loss.  At the end of the day, Buffalo deserved to win.  They killed us on the offensive glass and that was one of the big differences,” Akron head coach Jodi Kest said. “Their pressure caused us to not get into the flow of our offense but the rebounding was just, it was bad in the half court set as well as the free throw situations.