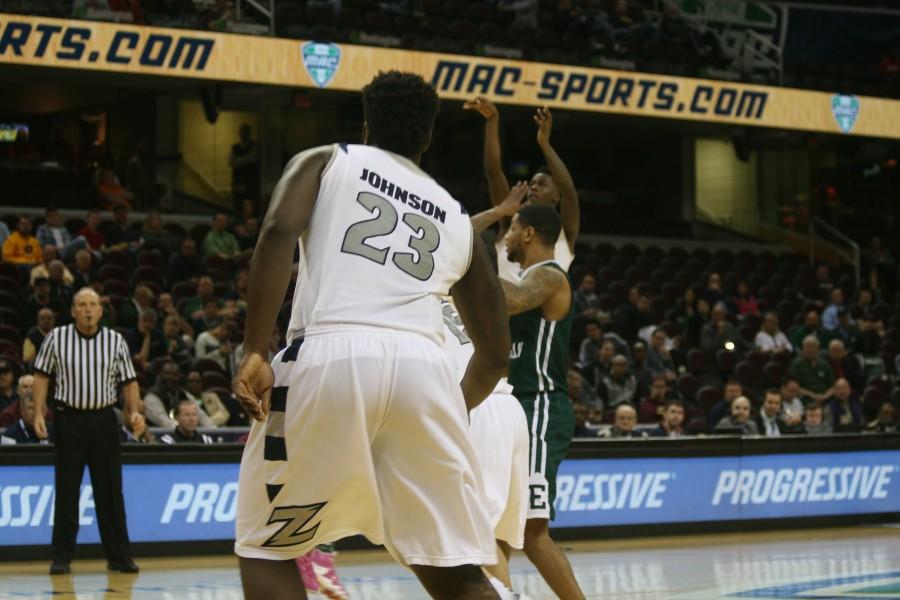 The University of Akron men’s basketball team defeated Bowling Green, 80-66, in the first semi-final game of the Mid-American Conference of the night at Quicken Loans Arena in Cleveland, Ohio on Friday.

The win put Akron in the championship game for the seventh time in the last 10 years.

Jackson provided most of the offense in the first four plus minutes of the game with a couple of drives for layups and a sweet crossover dribble and drop back trey giving Akron a 10-6 lead early.

After the first media timeout, Big Dog came in and made his presence knows as he backed his way into an easy bucket, and then found  Kretzer for a triple to allow Akron to extend the lead to 15-9.

With the next media timeout happening with 11:34 left and the Zips still clinging to a 15-13 lead, Coach Keith Dambrot’s team went on a tear.

A couple of Robotham jumpers, a McAdams trey, and another bucket from Johnson on the inside to go along with tremendous defense sparked a 9-0 run to open up a 24-13 advantage.

The Falcons withstood the rally and answered with back to back threes from Spencer Parker and David Joseph sandwiched around a Robotham layup to close the gap to 26-19 with 6:43 to go before the break.

However the Zips got four free throws from the line by McAdams and another three from Kretzer around a jumper from the Falcons Parker to extend the lead to 12 with 5:23 left before intermission.

Bowling Green took advantage of a couple of turnovers and missed shots by the Zips before halftime to slice the deficit to six and 41-35.

The Zips were led by Johnson’s 12 points in the first half while McAdams added 10 more. Akron shot better in the first half 51.9 percent than BG who shot 44 percent and the Zips had a slight 14-13 advantage in boards.

The second half became a back and forth game as each team tried to grab the momentum and establish themselves only to see their opponent answer any mini run that would happen. At the media timeout with 15:39 left in the game Akron still led 51-46.

A stick back bucket by the Falcons Antwon Lillard and subsequent free throw after Johnson fouled him and a layup by Parker allowed BG to narrow the game to 53-52 with 13:23 left.

Johnson muscled his way to an old-fashion three point play and another easy bucket on a sweet entrance pass from Jackson to Johnson pushed the lead back to six with 11:48 remaining.

Big Dog added another bucket from inside to push the lead to eight before BG finally broke their drought with a couple of free throws, but the Johnson scored again inside and Akron enjoyed a 62-54 left 9:23 to go.

The combination of Jackson and McAdams hooked up on a tremendous alley-oop play ending with a McAdams dunk and Jackson added a triple to Akron’s total as they stretched the lead to 72-59 with 4:06 remaining.

“That was the kind of game I expected. I thought they would really come out and try to punch us,” Dambrot said. “They’ve been playing with an extreme amount of confidence. Anybody that can go to Kent State and win and then beat Central Michigan, who was in the championship game last year, tells you that they believe in themselves.”

After a BG timeout, a Joseph bomb cut the Zips lead to 10, but Johnson found Kretzer down low for an easy bucket pushing the lead back to 12 at the 2:43 mark.

The Falcons could not get any closer and after a couple of tosses for the charity stripe and an easy bunny by Robotham and Akron enjoyed their largest lead of the night at 16 with just 20 seconds left.

In the second half, Akron shot 57.7 percent and finished the game hitting 54.7 percent of their shots. The Zips won the turnover war by causing BG to turn the ball over 12 times while only doing it themselves nine times.

A statistic that stood out that was not in Akron’s favor was the fact that BG out-rebounded the Zips 25-12 in the second half, including a dozen on the offensive end.

“I don’t know. I don’t really tend to worry about much. We rebounded when it mattered, I guess. I really don’t like it. I think it kept them in the game for sure,” coach Dambrot said when asked if that stat worried him.

“We’ll do a better job (tomorrow). Obviously I think transition defense will be the key tomorrow against both teams (Ohio or Buffalo) and making sure they don’t get second shots. We’ll worry about it, but we won’t make—we won’t act like the sky is falling,” Dambrot said about a solution to the rebounding.”

With the win, Akron will face the winner of the Ohio/Buffalo game that takes place immediately after the Zips game at 7:30 Saturday night.