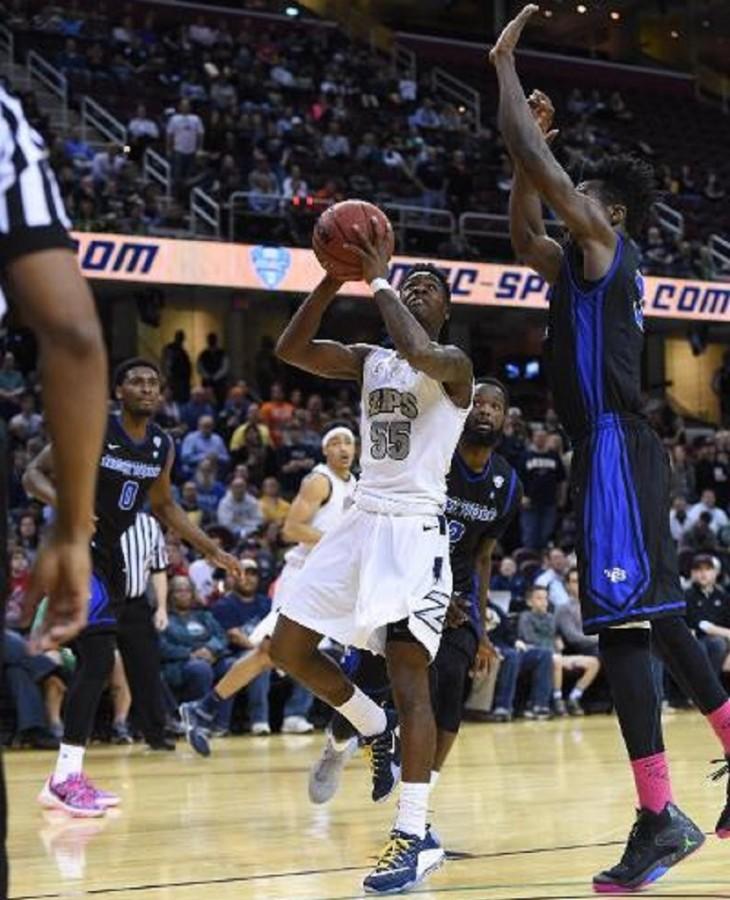 Buffalo’s Blake Hamilton shot a dagger through the University of Akron men’s basketball team and all its fans as he buried a three point shot with just 2 ticks left on the clock to give his team a 64-61 victory in the championship game of the Mid-American Conference Saturday night.

With the win, the Bulls will receive the automatic bid into the NCAA Basketball Tournament that starts next week. Meanwhile, Akron must sit and wait to see what happens.

“Tough loss for our guys. I feel bad for them,” Akron head coach Keith Dambrot said. “Battled the whole way, put themselves in position to win, and just did’t make enough plays when in mattered.”

The game started with each team matching one another. Buffalo’s Lamonte Beardon begin the scoring with a jumper, Akron answered with two Aaron Jackson free throws. The Bulls’ Jarryn Skeete sank a three pointer then the Zips’ Antino Jackson responded with one of his own.

The two teams headed into the first media time out with Buffalo holding a 7-5 advantage with 15:45 left in the half. Buffalo’s Hamilton canned a pair from the charity strip out of the time out to make it 9-5.

The Bulls opened up a 17-7 lead C J Massinburg hit a triple as the Zips were having trouble shooting. Akron opened the game hitting just two of 12 shots.

Back-to-back buckets by Johnson and a layup by Robotham brought the Zips closer at 26-23 before Massinburg buried another triple to cool the Zips’ momentum.

Akron crept to within one at 29-28 on a Josh Williams deep ball with 2:01 left before the intermission, but Massinburg once again responded with a layup to push the lead back to three.

The half ended with a flurry and Akron tried to tie the game on a Robotham three but was unsuccessful, but his hustle in stealing the ball at midcourt from Massinburg led to another Williams’ trey that tied the game at 33 with 10 second remaining.

The Zips bounced back from poor shooting at the beginning and finished the half by hitting 11 of 19 shots. Akron hits 41.9 percent (13-31) for the half.

Big Dog carried the Zips in the first half with his 10 points and four rebounds. Antino Jackson and Williams each had six to aid Akron.

Massinburg carried Buffalo with 15 points, the Bulls also out-rebounded Akron 23-14 in the half.

The second half started as a carbon copy of the first, slow and deliberate while the Zips had trouble finding the bottom of the basket.

Buffalo used the first 6:17 to go on a 16-3 run to take control while taking the Akron crowd out of the game. A Williams’ triple put a stop to the Bulls’ run.

A jake Kretzer three brought Akron to within 49-41 but Akron had hit only four of its first 12 shots in the second half.

After Jared Skeete coverted a layup with 9:12 remaining to give Buffalo a 54-47 lead, Akron found the shooting touch once again.

Kretzer found the bottom of the basket from long range, and after a Bulls’ layup, McAdams connected on two bombs in a row to close the game to 54-53 with 7:40 remaining prompting a Buffalo time out much to the delight of the Akron crowd.

After a defensive stand, Johnson pushed his way inside for a easy bucket to give the Zips their first lead of the game at 55-54 with 6:51 left in the game.

Beardon gave the Bulls the lead back with a short jumper at the 5:42 mark. Then both teams could not find a way to score until Beardon find his way inside for another short shot with 3:52 remaining and the Bulls led 58-55.

Antino Jackson got the crowd roaring with his back-to-back three pointers to put the Zips back on top at 61-58.

However, Hamilton quickly silenced them with his own bomb to know the game at 61 with 1:39 to go.

The game stayed deadlocked as Buffalo took a time out with 29.1 ticks on the clock. A foul called on Antino Jackson after the time out allowed Buffalo to run the clock down for possibly the last shot.

Hamilton did just that as he buried a three with 2 second left on the clock.

After an Akron time out, a long toss down the court was tipped and then stolen by Hamilton who was able to dribble out the remaining time and end Akron’s chance for the automatic bid to the NCAA Basketball Tournament.

Now the Zips will have to wait out Selection Sunday to see if by chance they were picked for one of the at large bids.

Antino Jackson’s 14 points led the way for the Zips while Johnson chipped in 12 to go along with his 6 rebounds.