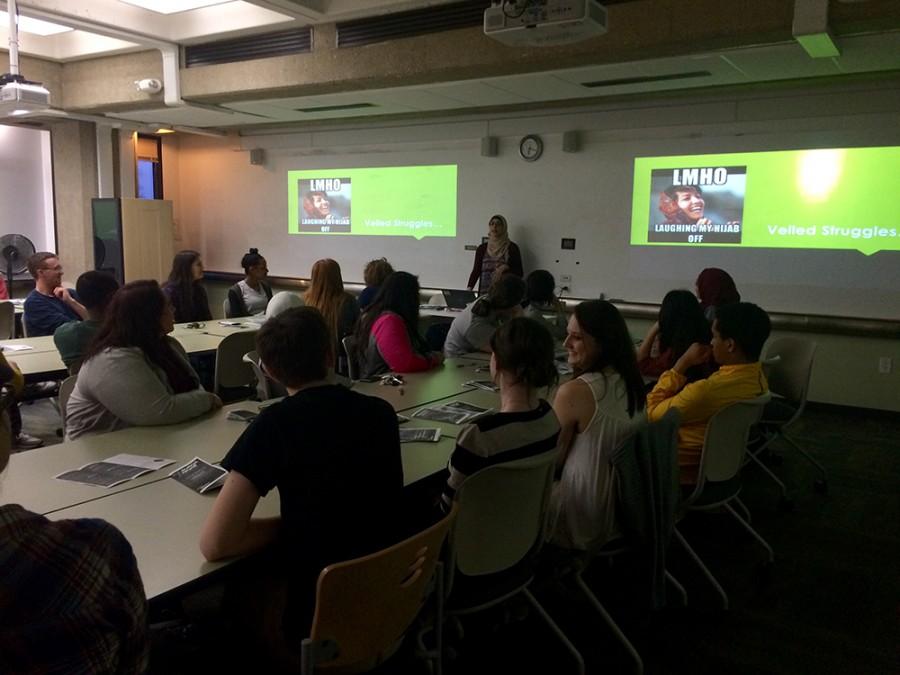 The topic of religion can be a touchy subject to some. UA senior Israa Eddeb hosted an event called Veiled Conversation to teach students about Islam and clear any misconceptions they might have.

This event, held on March 9 in Bierce Library room 274A, offered individuals the chance to spark conversations between covered Muslim women and students. Throughout the night, UA students Jenna Jwayyed, Arkann Alkhalilee, Amal Almahd, and Eddeb shared knowledge about their religion, discussed common misconceptions, and answered questions from the audience.

Eddeb hosted this event as a part of her honors research project. She is graduating in May with a focus in public relations. Since Eddeb is a communications student, she wanted to observe the communication between veiled Muslim women and an audience.

“As a Muslim woman who wears hijab, I wonder what people think and what they are curious about,” Eddeb said. “Some people are not fully educated about hijabs and I took this chance to help talk about what it all means.”

During the event, psychology student Jwayyed spoke on the background of the hijab and the main purpose why Muslim women wear it. According to her, the main reason is to serve God.

When asked if she is treated differently because she is Muslim and wears a hijab, Eddeb said,  “I feel like people treat me as if I am not American because I wear hijab and because I have Libyan and Palestinian roots; however, I am American, born and raised. There are some people who see me in hijab and assume I don’t speak English, but in reality, that’s the only language I can speak perfectly.”

After the hijab discussion, students and faculty were provided with pizza and refreshments.

While the audience enjoyed their food, Jwayyed, Alkhalilee, Almahd, and Eddeb shared their experiences about the hijab and when they decided to start wearing it.

The panel was then asked questions such as “What is some racism or discrimination you have faced as a Muslim women wearing hijab?” and “Why did you decide to wear hijab?”

Most audience members were fairly comfortable with asking questions, which was Eddeb’s main goal of the event.

One common misconception is that people think that Islam oppresses women.

According to Eddeb, that is not true at all because women are respected and honored in their religion. There may be many misconceptions, she said, because people practice religion differently, and there will always be an extreme case — but that does not apply to every Islamic believer.

Paige Dennis, a Christian student, attended the event because she thought it would be a wonderful opportunity to widen her cultural horizons.

Dennis said she enjoyed the event because it gave her input from people she has never met before and it gave her the chance to hear what she already knew from different perspectives.

“I think the event was so great because it was personal and comfortable,” Dennis said. “I think it truly helped some people understand aspects of Islamic culture they previously didn’t know about and, in today’s society, I feel it is vital for people to have the opportunity to educate themselves on different cultures.”

The event overall was beneficial for both attendees and the panel because they all had the chance to learn more about each other.

Eddeb thinks that it’s important for students to get a better understanding of different cultures and religions because there is a diverse population of students here at UA.

“Increasing knowledge on culture and religion will hopefully increase the tolerance and decrease the discrimination,” Eddeb said. “Especially with the media not portraying religions or ethnic groups correctly, we have to use our voice to defy stereotypes and educate people.”